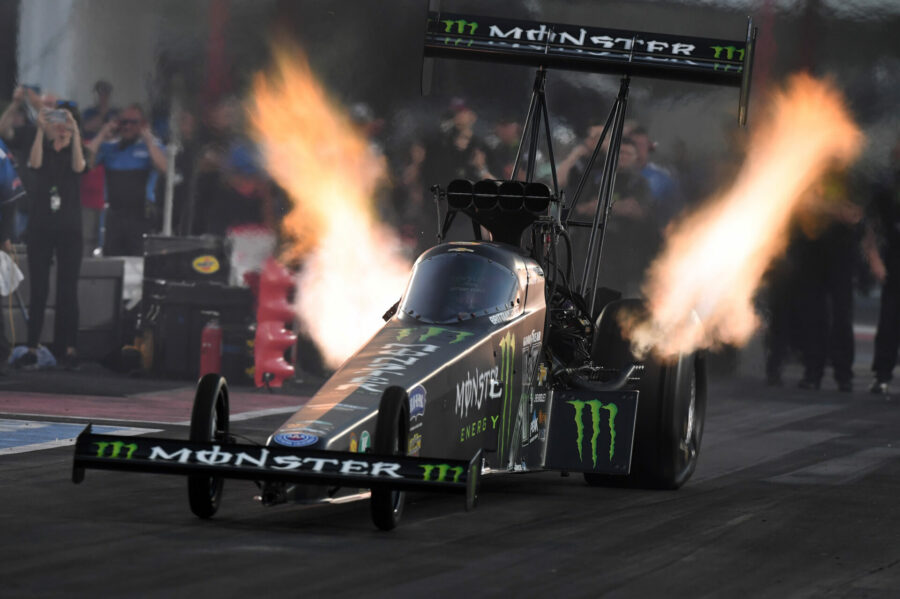 BAYTOWN, Texas (April 22, 2022) – As the final pair down the Houston Raceway Park track on Friday night, Brittany Force and the Monster Energy / Flav-R-Pac Top Fuel team went low of the session to take the provisional No. 1 qualifying position at the NHRA SpringNationals. Austin Prock and the Montana Brand / Rocky Mountain Twist team sit No. 3 and in Funny Car, Robert Hight has the AAA Texas Chevrolet Camaro in second while John Force sits 15th with his PEAK / BlueDEF PLATINUM Chevy.

With header flames lit under a Texas sunset, Brittany Force and the Monster Energy team laid down a stellar 3.695-second pass at 333.58 mph to go to the top of the Top Fuel qualifying sheet.

“That was just huge for our team, and everyone that’s part of tonight. All of the fans who are out here at the final race in Houston, really glad to be able to put on a show for them like that, it’s pretty exciting for all of us. And we hope it holds,” Force said. “That was our target. That was the number we were aiming for and we were right on it. I’m looking forward to tomorrow, we get two more, but those will be the ones that really matter. We still possibly can get knocked out, but we feel safe. It’s an 18-car show, that was our biggest concern, making sure we’re in the show.”

Coming off a successful test session in Las Vegas, Austin Prcok and the Montana Brand / Rocky Mountain Twist team had an impressive first go at Houston Raceway Park. Prock will earn a bonus point for being third quickest with his 3.701-second pass at 330.15 mph.

“Good start to the weekend for this Montana Brand / RMT team. I’m not surprised, we had a really successful test in Las Vegas a couple weeks ago on Monday and figured a lot of things out,” Prock said. “Everyone did a great job. The engine looks amazing, and the parts look brand new out of it. That’s a big step in the right direction. We’ve been fighting that all year and made a nice clean pass. It felt really, really safe and comfortable all the way down the racetrack. We’re hoping for a little bit quicker ET, but definitely a great start with this new package. It ran within a hundred of what we thought it was going to run. It would have been nice to go one, two with my teammate, Brittany Force, but all in all, a good day for John Force Racing, and looking forward to Saturday and hopefully we can leave here with a Wally on Sunday.”

Defending event champion Robert Hight and his AAA Texas Chevy just narrowly missed being low of the session with their 3.865-second pass, but they would be fastest at 331.36 mph.

“It’s great to be out here in Texas running the AAA Texas Chevy and that was a pretty good way to start the weekend. Jimmy Prock and Chris Cunningham are always dialed in when we’re here. They know this track,” said Hight who is looking for his fifth. “Tomorrow will be important, running in the middle of the day, similar to Sunday race day. We’ll get set up and be ready to go.”

Celebrating the 20th anniversary of his 100th win that came in 2002 at Houston Raceway Park, John Force and the PEAK BlueDEF Chevy had a slight misstep in their first qualifying try. Force would smoke the tires early to run 6.334-seconds at 108.71 mph.

“It’s all good. We’ll be fine. Still have two more tries tomorrow. We tested well after Las Vegas, really had some good runs, so we know it’s there,” Force said. “Danny Hood, Tim Fabrisi and these guys will have it all figured out and then I just need to be on my game. Have to say thank you to the Angel Family for all they’ve done for this sport, really sad to see this track go. We appreciate all these great fans out here packing the stands.”

Qualifying at the NHRA SpringNationals at Houston Raceway Park continues with sessions at 2 and 5:15 p.m. CT on Saturday. Eliminations are scheduled for Sunday at 11 a.m. Television coverage will continue to be on FOX Sports 1 (FS1) with a second qualifying show Sunday at 10:30 a.m. and eliminations at 7:30 p.m. ET.