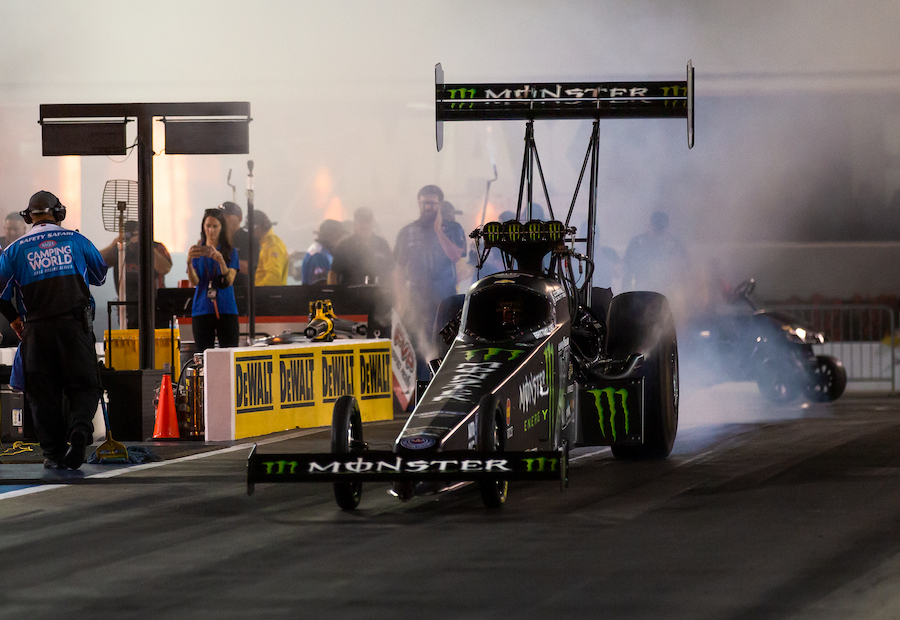 ENNIS, Texas (Oct. 06, 2021) – Just 36 points back from the Top Fuel points lead with four races left in the NHRA Camping World Drag Racing Series, Brittany Force and the Monster Energy / Flav-R-Pac team head to the Texas NHRA FallNationals at Texas Motorplex determined to make a jump to the top of the Top Fuel standings, hopefully for good.

The Monster Energy / Flav-R-Pac team has a total of 10 No. 1s with one win at Heartland Motorsports Park in Topeka, Kan., where Brittany went onto share a historic winners circle with legendary father John Force. It was the first time in NHRA history that a parent-child duo had won together in the pro categories. The Monster Energy / Flav-R-Pac team has set track records with both their stellar elapsed times and speeds, staying consistent through qualifying but falling on bad luck on race day. The David Grubnic and Mac Savage led team has been to the finals five times in the 2021 Camping World Drag Racing Series season, most recently finishing runner-up at the Carolina Nationals.

“We’re in a great place sitting No. 2 in points. This Monster Energy / Flav-R-Pac team is looking forward to putting the last couple weekends behind us and getting right into the race this weekend,” said Force referring to her dragster putting cylinders out and recent hole shot losses. “I’ve struggled a little on my end but I’m looking to bounce back this weekend with a win at Dallas.”

Force has had success at Texas Motorplex. In the seven years she’s competed at the venue, Force has qualified within the top five for five consecutive years, most recently going No. 1 in 2019. In 2017, her championship season, Force raced to victory sharing the winners circle with teammate Robert Hight. The Texas Motorplex is one of the 13 tracks in the current Camping World Series at which Brittany is the track record holder for either time or speed.  She lowered the ET record to 3.651 seconds in her last appearance in the FallNationals in 2019.

“This Monster Energy / Flav-R-Pac team is looking forward to this weekend’s FallNationals in Dallas. This event is going to be a big one,” Force said. “We have the opportunity to test beforehand, hang out with fans at the fan fest on Thursday and we get four qualifying runs before going into race day. I’ve won here before and I’m looking forward to doing it again.”

The Texas Motorplex is playing host to the “Stampede of Speed” ahead of the Texas NHRA FallNationals. While festivities have been ongoing since Oct. 2nd, Force and her teammates will get the week started Wednesday with the NHRA Camping World Drag Racing Series Open Test Session and then the Fan Fest in downtown Waxahachie on Thursday evening.