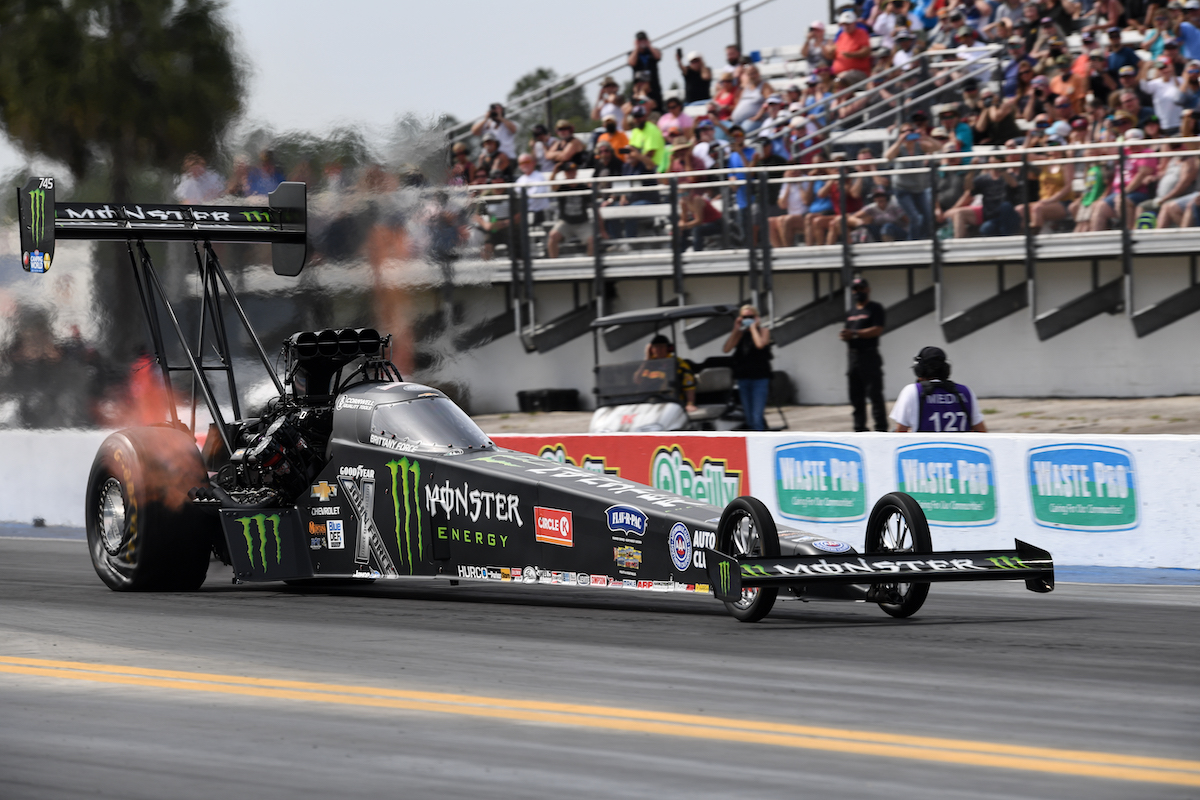 COMMERCE, Ga. (April 28, 2021) – Brittany Force and her Monster Energy / Flav-R-Pac Top Fuel dragster team have come out swinging to open the 2021 NHRA Camping World Drag Racing season. Heading into the Lucas Oil NHRA Southern Nationals, the final event at Atlanta Dragway, April 30-May 2, they’ll look to continue to do the same this time ending the weekend with a victory.

Force and her David Grubnic and Mac Savage led team opened the season at the Gatornationals with a consistent race car snagging top speed of the event in the first round of eliminations at 331.94 mph. At the Vegas Four-Wide Nationals, Force tallied the 21st No. 1 qualifying position of her career and ended the weekend with the top speed and lowest elapsed time when she ran 3.722-seconds at 330.80 mph to open eliminations.

“Overall, we’ve started the season running well. We looked good in testing and at the Gatornationals and qualified No. 1 in Vegas,” said Force who will be in her Monster colors in Atlanta. “We did some testing on Monday and the team, David Grubnic and Mac Savage, they’re feeling good. Worked out some things so we’re looking forward to Atlanta next.”

In pursuit of her first win at historic Atlanta Dragway, Force has had recent success at the venue. The last time the Southern Nationals were contested in 2019, Force picked up her first No. 1 qualifying position at the track and powered her way to her first final round defeating Cameron Ferre, Antron Brown and Jordan Vandergriff before exiting to eventual world champion Steve Torrence in the finals.

“Heading into the final Southern Nationals at Atlanta Dragway this weekend. Our Monster Energy / Flav-R-Pac team is looking for our first win of the 2021 NHRA season. We’ve been qualifying well and running very consistently. Winning Atlanta this year would be so much more significant since we won’t be returning. This team wants to take home the last and final win at Atlanta Dragway this weekend!”

The Force Family has had notable success at Atlanta Dragway that Brittany and the Monster Energy / Flav-R-Pac team will look to cap off. Not only has Force’s father, legendary Funny Car driver John Force, had wins at the venue but her older sister Ashley Force-Hood picked up the first win of her career in Atlanta when she defeated her father in the 2010 final and younger sister Courtney Force-Rahal tallied a win in what was her final season as a driver, 2018.

The final Lucas Oil NHRA Southern Nationals at Atlanta Dragway will take place over two days. Qualifying for the event will start Saturday at 1:15 p.m. ET with a second session at 5:15 p.m. ET. Eliminations will take place Sunday at 11 a.m. ET. Fans can catch the action Sunday on FOX Sports 1 (FS1) with qualifying coverage at 10:30 a.m. ET and eliminations coverage at 11:30 p.m. ET.