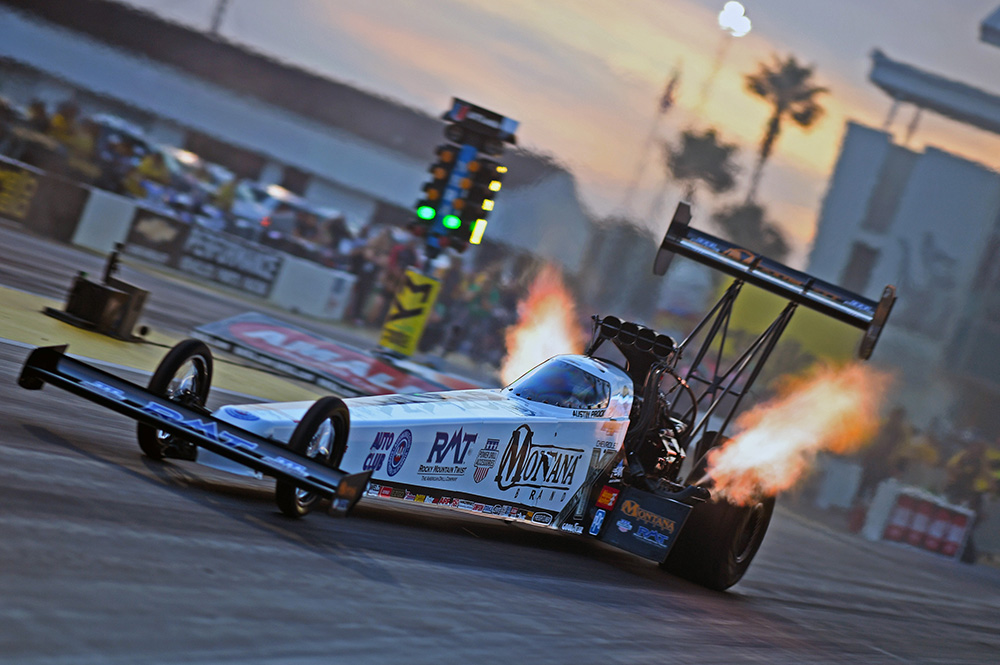 The fourth event, and first of two four-wide races on the 2019 NHRA Mello Yello Drag Racing Series schedule, will be Prock’s first time competing in the four-wide format but won’t be the first time he’s been down The Strip at Las Vegas Motor Speedway. Following last year’s inaugural four-wide event, Prock got his first taste of nitro when he tested in the Advance Auto Parts Funny Car. This time around he’ll be adding another first, racing in the four-wide behind the wheel of his 11,000-horsepower dragster. The facility is one of four where Prock has made passes, and having also worked four-wide events on the crew member side, he’s hoping the familiarity will work to his advantage.

“I’m looking forward to getting back to Las Vegas. Just one year ago I was stabbing the gas in Courtney Force’s Advance Auto Parts Nitro Funny Car for the first time. It’s crazy to think how far we’ve come in just one year and now I’m racing in the Top Fuel class,” said Prock. “This is my first time racing four-wide. When you have four 11,000-horsepower hot rods going down the track it’s really something so I’m excited to be a part of it. I’m ready to stage up and see what that’s all about and go some rounds.”

Since the onset of the season, the Montana Brand / Rocky Mountain Twist team have continued to improve their performance. Each race has provided the opportunity to gather data they didn’t have before and so far, its showing to be beneficial on the track. With first-round wins over teammate Brittany Force and veteran driver Clay Millican at the Winternationals and Arizona Nationals, respectively, a career best E.T. of 3.696-seconds and speed of 334.15 and a series of consistent passes at the recent 50th anniversary Gatornationals, Prock is well on his way to becoming a top contender in the category.

“Our Montana Brand / Rocky Mountain Twist Top Fuel dragster should be running on mean. We found some things that were holding us back while at the shop so we made changes and it should really benefit our performance,” said Prock. “My team and Jon Schaffer and Ronnie Thompson have been putting in work. Every race we’re getting more info, getting better, so I’m confident in my team and I’m ready to bring what we’ve learned to The Strip.”