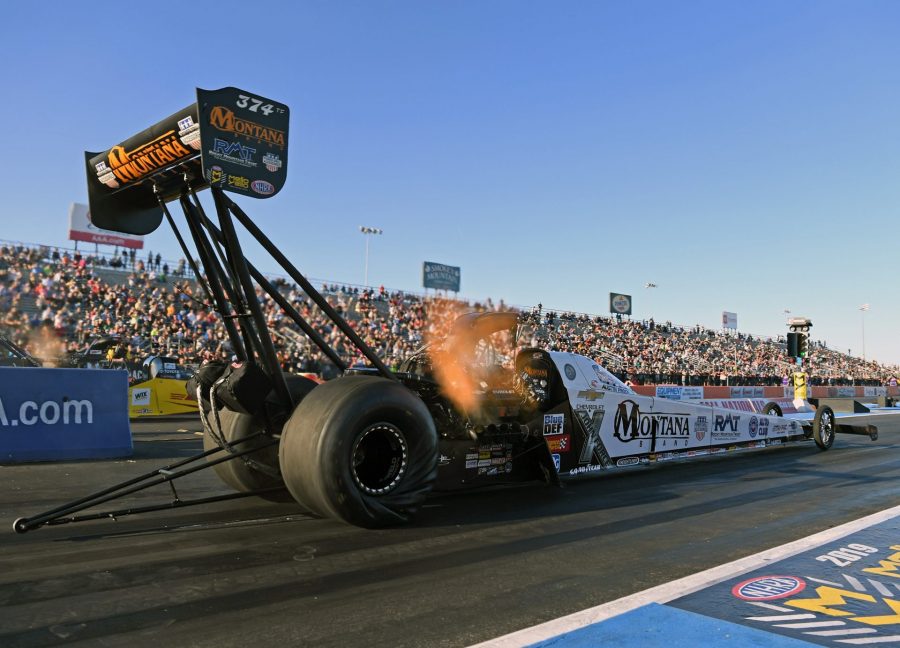 LAS VEGAS (Oct. 30, 2019) — At a track that helped kick-off his nitro drag racing dreams, Rookie of the Year candidate Austin Prock and his Montana Brand / Rocky Mountain Twist team are headed to The Strip at Las Vegas Motor Speedway this weekend for the Dodge NHRA Nationals Presented by Pennzoil, ready to continue their bid for the Top Fuel title.

With two of six playoff races remaining in the NHRA Mello Yello Countdown to the Championship, Prock is sitting sixth in the points standings after another breakthrough performance at the recent AAA Texas NHRA FallNationals.

After crossing the finish line with a stout 3.714-second pass at 328.38 mph in the final qualifying session, the first-year driver started race day from the No. 7 spot. In his first pass of eliminations, Prock propelled his Mike Green and Ronnie Thompson tuned dragster to a blistering 3.688-second pass at 334.40 mph. It marked his career best elapsed time and set the Texas Motorplex speed record. Prock continued firing on all cylinders in the quarterfinal posting low E.T. of the round. He’d come up short in the semis by only four thousandths of a second to fellow rookie Jordan Vandergriff, but he’d leave Texas Motorplex sitting one spot better in the Mello Yello points standings.

“This Montana Brand / Rocky Mountain Twist team had a solid race day in Texas and after a performance like that, I’m excited to see what we can do at the next one. We barely missed it in the semifinal but we have good momentum,” Prock said. “We’ve had a week off, everyone is working hard but this Countdown is still tight. Our focus is to go win these next two and see how the points shake out. We definitely have the car to do it.”

Having had his first taste of nitro following 2018’s inaugural four-wide event at The Strip when he tested in the Advance Auto Parts Funny Car, Prock is no stranger to the facility. Earlier this year the third-generation racer competed in the spring four-wide event where he continued to build his rookie resume with a series of consistent passes in the .80s. At this year’s fall event, Prock will be competing to be the fourth John Force Racing driver to take home the Wally alongside teammates John Force and Robert Hight, and previous JFR racer, Tony Pedregon.

“I’m really excited for Vegas. It’s where I got my start in a nitro Funny Car, so it has a special place in my heart,” said Prock whose rookie resume includes one win and five semifinal appearances. “When we were there earlier this season we didn’t do as well as we hoped but we’re making our way back there and we’ve really progressed since then, so I’m excited to see what we can do.”