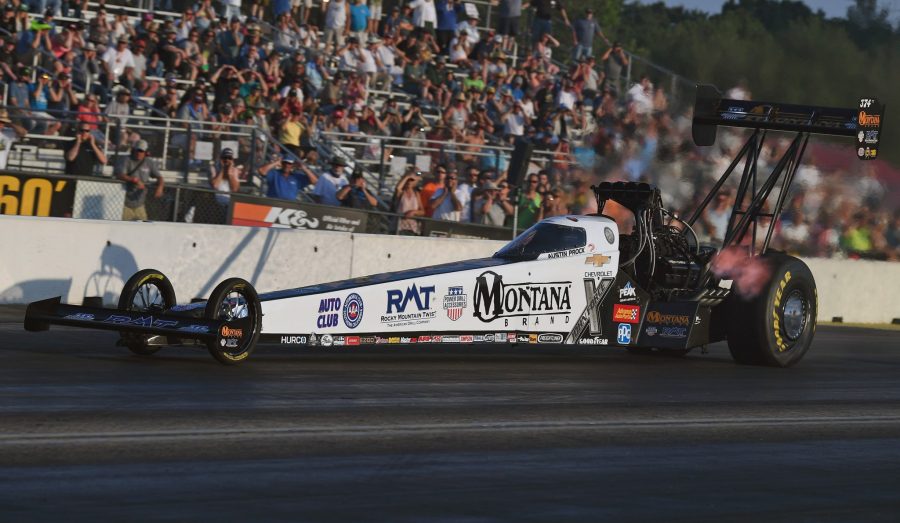 For Prock and the Montana Brand / Rocky Mountain Twist team, taking it one step at a time and continuing to build has been the focus of the season and with a resume that extends to a semi-final finish, four second-round appearances and a career best elapsed time of 3.69 and speed of 334.15, the newest team on the John Force Racing roster has been proving their potential.

At the recent New England Nationals in Epping, Prock added to his portfolio of passes in the .70s and .80s with a 3.899-second pass at 310.05 mph that earned him the No. 6 qualifying spot. He continued the consistency on race day to run 3.843-seconds at 323.19 for his best pass of the weekend and third quickest of the round, but would fall short of advancing to the quarterfinals to reigning Top Fuel world champion and eventual event winner, Steve Torrence.

“We didn’t have the outcome we were looking for in Epping and got beat in the first-round again. The last two events before that we were beaten too but we’ve had good enough numbers to beat any other competitor in those rounds,” said Prock, who is only eight points shy of being back in the top 10 points standings. “The past couple weekends haven’t shown our potential but our car has been putting up competitive numbers so I know we’ll get things figured out. I’m looking forward to this next race in Denver and seeing what we can do.”

Although the third-generation driver has yet to race at Bandimere Speedway, he’ll be looking to follow in the footsteps of John Force Racing teammates John Force and Robert Hight, and former John Force Racing driver, Tony Pedregon who have all picked up Wally’s at the facility.

“The Montana Brand / Rocky Mountain Twist team is working hard and making the proper changes to the car to perform at its peak level at the Mile-High Nationals and I’m excited to get there and see what we can do,” said Prock. “My crew chief, Mike Green has had great success there in years past along with some of my teammates, so I’d really like to add to that with my first win.”

Prior to hitting the track on Friday, Prock and teammates Brittany and John Force will be making a special appearance at the Gates headquarters in downtown Denver. Gates provides the four John Force Racing hot rods with Gates Poly Chain Nitro belts, a vital component in getting the 11,000 horsepower machines down the track safely and successfully.