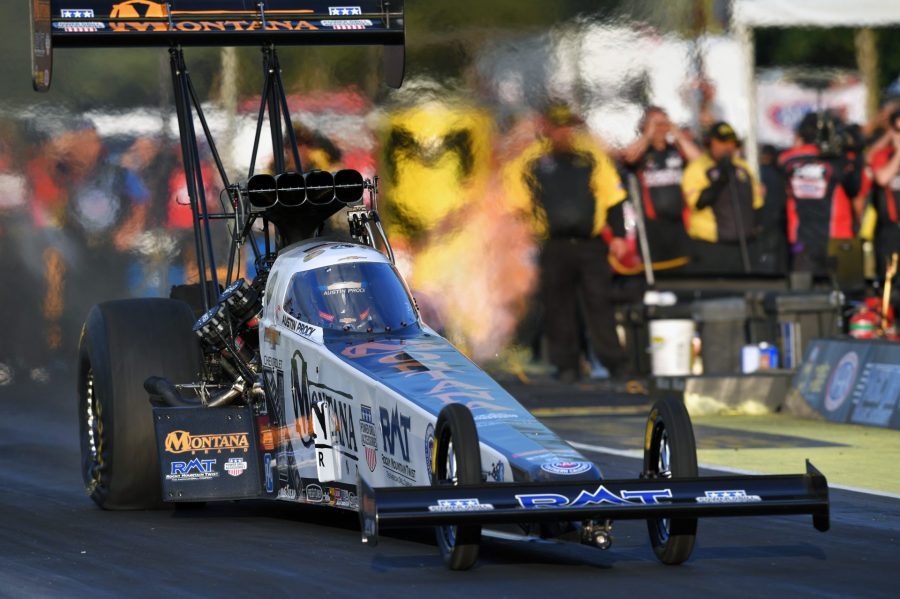 READING, Pa. (Sept. 11, 2019) — Austin Prock and the Montana Brand / Rocky Mountain Twist Top Fuel team are heading to the first event of Mello Yello Countdown to the Championship, NHRA’s six-race playoffs, the Mopar Express Lane NHRA Nationals presented by Pennzoil, ready to keep up the momentum as they compete for the Top Fuel championship title.

With a rookie resume that includes a win from Seattle at the Northwest Nationals, three semifinal appearances, most recently at the Chevrolet Performance U.S. Nationals, and a career best elapsed time of 3.696-seconds and top speed of 334.15 mph, Prock and the Montana Brand / Rocky Mountain Twist team clinched their spot in NHRA’s Countdown to the Championship. After a solid weekend at the U.S. Nationals, the world’s biggest drag race, Prock locked in his spot in the Countdown after Sunday’s last qualifying round when he powered his hot rod to a clean 3.726-second pass at 326.71 mph. On race day, the first-year driver maneuvered his 11,000-horsepower machine past veteran racers Richie Crampton and Mike Salinas to make a semifinal appearance and take the No. 8 position in the Countdown.

“I’m pretty proud of how things are going right now. We had a bit of a tough start in qualifying at the Chevy Performance U.S. Nationals but we put up some competitive numbers to get in the competition. We ended with another semifinal appearance for the second consecutive week to follow up that win in Seattle,” said Prock. “I think if we can keep this pace up, going to the semifinals and getting into the finals, we’ll be able to run for the championship. We have more work to do but everybody is working hard at it and I’m excited to see what we can do.”

Prock, who is up for the Auto Club Road to the Future Award, NHRA’s Rookie of the Year Award, is entering this year’s event at Maple Grove Raceway looking to follow in the footsteps of John Force Racing greats including John Force, Robert Hight, Brittany Force, Mike Neff and Tony Pedregon as he competes for his second career yellow hat win.

“I’m looking forward to Reading. It’s the first race of the Countdown and it will be a great chance to move up in the points,” Prock said. “We are going to need another strong weekend to contend for the championship and I believe this Montana Brand / Rocky Mountain Twist team can do that.”