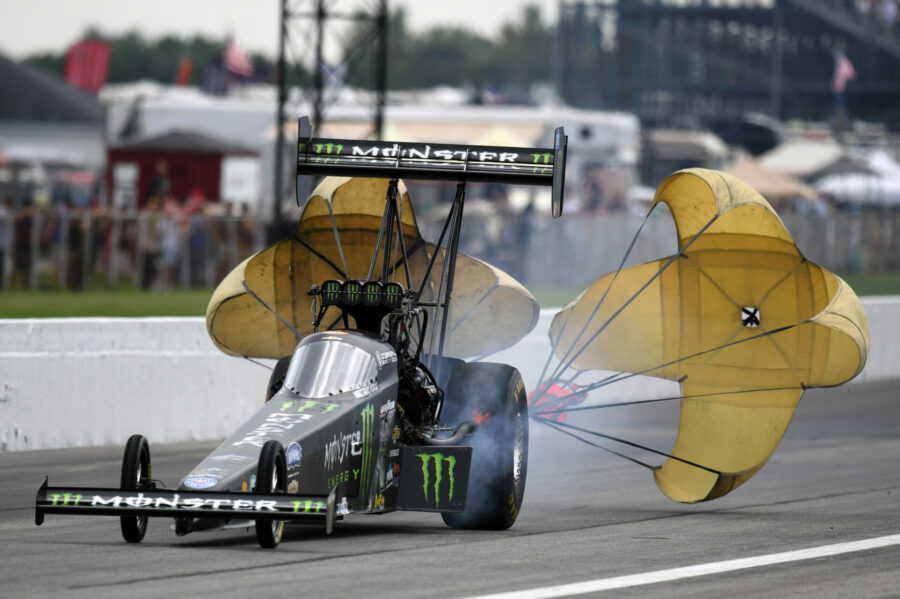 In the semifinals, Force lined up with Doug Kalitta who was unable to make a clean pass going 6.518 at 137.60. The David Grubnic and Mac Savage tuned Monster Energy dragster laid down a 3.767 at 335.07 to advance to the finals for the second consecutive year.

Racing against Antron Brown for her first U.S. Nationals win, Force and the Monster Energy team were side-by-side with the three-time champion but came up short at the finish line. Brown would go 3.706-seconds at 321.65 mph to defeat Force’s 3.714 at 333.00.

“Overall, not a bad weekend for this Monster Energy / Flav-R-Pac team. We can’t complain. We qualified No. 1, ran for the Pep Boys Callout money, got beat in the final. Race day, Monday had another final round appearance. So, it’s positive all around,” Force said. “Our biggest objective coming in was leaving with the points lead and we did just that. Everything resets in the Countdown but we’re in the position we want to be in, and we head to Reading, Pennsylvania next.”

Robert Hight and the Auto Club team picked up right where they left off from qualifying in their first-round victory lighting up the score board with a 3.891-second pass at 329.18 mph bettering John Smith’s 4.388 at 221.82. The win would bring on a slew of monster matchups for the three-time championship Auto Club team. First up would be Matt Hagan. In one of the most exciting side-by-side races of the event, Hight would handle his Auto Club Chevy to a stout 3.861-second pass narrowly defeating Hagan’s 3.867 at 334.65.

It would a pedalfest in the semifinals against long-time rival Bob Tasca III. Hight would have the better drive with 5.751-second pass at 250.92 mph to Tasca’s 7.473 at 120.68. Hight’s efforts would send the Auto Club team to their ninth final round of the season.

In his seventh U.S. Nationals final, Hight would take on reigning world champion Ron Capps, who earlier in the weekend picked up the Pep Boys NHRA All-Star Callout victory. Hight would run into trouble with tire smoke and wouldn’t be able to pedal his way to the win with only a 7.649-second pass at 85.73 mph while

“Not a bad day for this Auto Club team, granted not the way we wanted this afternoon to go, but we’re not putting our heads down. The Auto Club guys have been working hard all weekend, it’s a marathon here at the U.S. Nationals. We made some really good passes, went some rounds and we’re going into the Countdown in that number one spot. Now the real work starts, only ahead 20 points with the standings resetting for the Countdown, just have to take it one weekend at a time, one run at a time. I’ve said it before, it’s going to take another two or three wins to get that championship, that’s what we’re looking for.”

“Well, we went some rounds, had some good runs in this PEAK Chevrolet. We were able to find some consistency. That’s good, especially heading into the Countdown in two weeks,” Force said. “We’re fifth in points, which means after the reset, only 50 points out of the lead. Things can change quickly but we’re in it, we have a chance and that’s what we’re going after. Huge thank you to all the fans out here. You’re who we do this for, you bring us motivation.”

Austin Prock and the Montana Brand / RMT dragster had a clean pass of 3.774-seconds at 325.61 mph in the first round, but it wasn’t enough to get around four-time reigning world champion Steve Torrence and his 3.693 at 328.62.

“Thought this Montana Brand / RMT dragster had a little more out there to get around the champ. When you go up and duke it out with Torrence there’s always some extra motivation and a little extra competition at the line. I left on him so I did my job but it’s a team sport, win as a team, lose as a team, it can go both ways,” Prock said. “We made a full pull which we struggled to do through qualifying so hopefully that’s something we can consistently do and gain some power heading into the Countdown. We get a charity spot but hopefully we can hurt some feelings during the last six races.”

The NHRA Countdown to the Championship, NHRA’s six race playoffs, kicks off with the Dodge NHRA Nationals at Maple Grove Raceway in Reading, Pennsylvania, September 16-18.