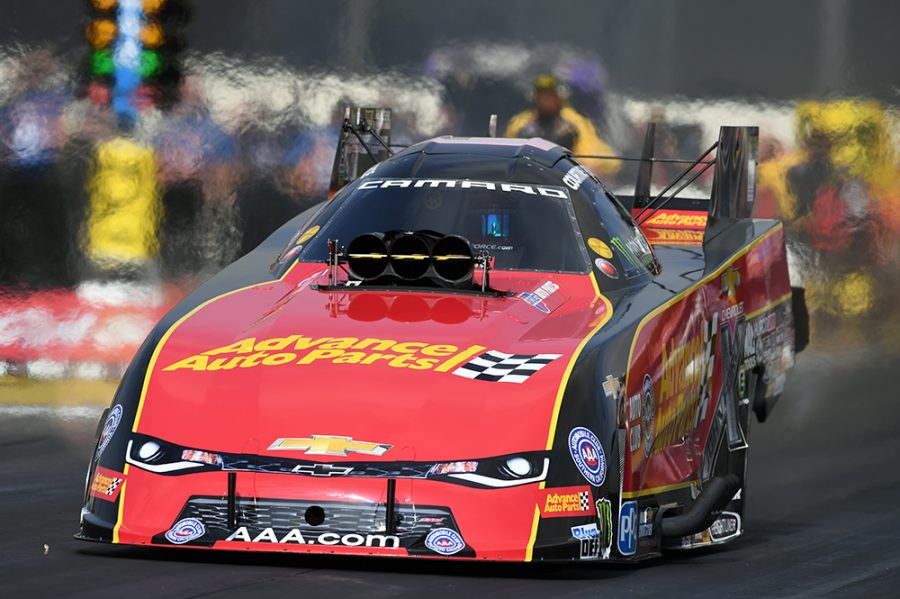 CHARLOTTE (April 25, 2018) – This season on Friday and Saturday Courtney Force has been almost untouchable, qualifying in the top four every race. She has two No. 1 qualifiers including a top spot at the inaugural Las Vegas four-wide national event. Force has captured one win this season, getting the trophy at the NHRA Arizona Nationals after qualifying No. 1 where she also recorded low ET and top speed of the race. It was a commanding performance and one that the nine-time Funny Car winner would like to repeat this weekend in Charlotte.

“We did it all in Phoenix. We were the No. 1 qualifier, top speed, low ET and won the race. It was a great weekend for this Advance Auto Parts Camaro team. I feel like I have the confidence in this team that we can do that every weekend. (Crew chiefs) Danny Hood and Brian Corradi have been doing a great job giving me a fast race car and we just need to get more round wins on Sunday. That is what makes this sport so exciting. You have to bring your best to the starting line every run.”

Bringing her best to zMax Dragway has not been a problem for the 2012 NHRA rookie of the year. Force has been No. 1 qualifier at the Charlotte four-wide two of last three years including 2017. Last year, she lowered the track record to its current 3.851 seconds.

“We are looking forward to Charlotte. I am not as nervous heading into this Four-Wide Nationals since we just came off the Las Vegas four-wide race,” said Force. “It will be nice to get back to that track and feel more comfortable with that unique format. We will see what we can do. We ran to the final quad in Las Vegas and we were No. 1 qualifier. Our goal will be to qualify strong and try and get three win lights.”

In 2016 Force raced to the second quad and narrowly missed advancing to the final quad in Charlotte. That was her best four-wide performance until Las Vegas this year when Force raced to the final quad and once again narrowly missed getting the win. The unique format has leveled the playing field across the professional ranks and continues to add a higher level of excitement from the burnout to the turnout.

In addition to the on-track excitement Force will also be splitting time with a number of sponsor engagements in Charlotte, the home-base for her primary sponsor Advance Auto Parts. This is the second year of the multi-year marketing program and it continues build excitement on and off the track.

“There are going to be a ton of people out from Advance Auto Parts since Charlotte is their headquarters. It would be huge for us to end up in the winner’s circle at the end of the weekend,” said Force who will also be racing with the CarQuest shield on her Chevy Camaro. “It is great to know that we have a great race car that qualifies really well. That is a testament to what this Advance Auto Parts team is capable of doing. We have been running fast and just need to get it fixed up on race day. It is a whole different ball game on Sunday. It is nice to get that green hat as the No. 1 qualifier but it is more important to get that yellow hat for winning the race.”