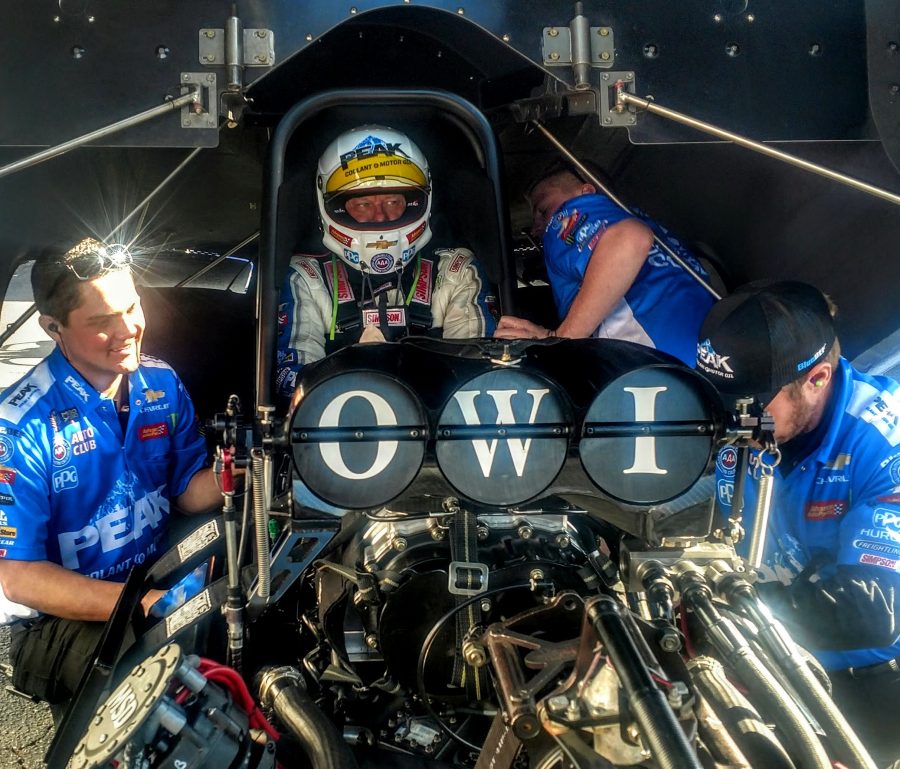 YORBA LINDA, Calif. (Feb. 28, 2018) — After his explosion and crash during Sunday eliminations at Wild Horse Pass Motorsports Park, John Force discusses the incident and the emotional weekend John Force Racing had at the NHRA Arizona Nationals.

How are you feeling?

“I feel great. I was in the office at 7 a.m. Tuesday morning. Thanks to Simpson. The helmet protected me. I have no complaints. The race car protected me. We build good race cars and we can always try and build them better. John Force is good, I am healthy. I am going to get a couple of check-ups to make sure I am okay. I was already goofy.”

Can you compare the explosion and wreck in Phoenix to your Pomona explosion just a couple weeks prior?

“Number one, I want to clarify a lot of people thought I was knocked out at Pomona. I wasn’t knocked out. I remember the race and I remember trying to stay off the wall. All those announcers Dave Rieff and Tony Pedregon do a great job. I got no problem with them. They can only talk about what they see, and they thought I was knocked out because I wasn’t pulling the brake handle. If you look at it, I’ve got my hands on the steering wheel trying to keep it off the wall to save the chassis. That’s my job. I came to a stop and pulled the brake. I was not knocked out. Some of the Safety Safari people, God Bless them. They love us, and they want to protect us, but I was never knocked out. I remember the whole view.

This week I was knocked out (chuckles) but with my hard head who cares?”

Have you watched the accident?

“I’ve watched it over and over trying to figure out what took place. We were lucky we didn’t get into the other driver. It dropped a hole early and was going perfectly straight and in the heat of battle you aren’t going to lift I don’t think. You want to win, and it is going, and you think you are going to win. We had an automatic shutoff that my guy on the starting line activated and it didn’t shut the car off. We are going to address that with the vendor and make sure this thing is working properly.

I am glad Jonnie Lindberg is okay. I got over in front of him and missed him and got up on the wall and I was lucky I didn’t go over the wall. Then I got all tied up in his parachutes. We were going around in circles out there like we were dancing. Head and those guys are real professionals and they know how to race and at the end of the day we’ll try and get their car in and get it fixed so they can be back in business. They said they had plenty of Toyota bodies for their team and I have plenty of Chevrolet bodies for us.

Most important in all of this is that the other kid, Linberg, is safe. I know there is financial concern, they are trying to get that chassis back. We built that chassis for them. Jim Head asked if we could get it right back into the shop for them, so we can front half it for them. We’ll do whatever it takes to help another racer. We are a big family out here. Sorry Jonnie there was nothing I could do it was in the lights and I am trying to get a win just like you and it exploded. It did knock me out. The last time in Pomona I wasn’t knocked out and I watched the whole ride. This time I was and the car got over. The NHRA and I are making sure I go through all the tests to make sure my head is OK. The car got over and we were real lucky. I am glad he is okay.”

Have you had a chance to analyze what went wrong?

“Without a doubt we have a gremlin in our cockpit. We have been pulling main studs and we are looking at the bolts. We are looking at the studs and how we cap them (UPDATE: After further analysis, John Force Racing has come to the conclusion that there is not a problem with the ARP main studs. The issue is with the threads in the block). We build our own engines, but a lot of racers are having the same problem it just seems to be biting me the worst. It is only two runs that it has happened on major, but I am meeting with my guys and we’ll figure it out.

It is not like things have just gone wrong. I don’t believe in that. It night happen one time, but it dropped cylinder leaving the starting line. It had a hole out the whole run and the car usually moves around and tells you something is wrong, but it didn’t move around it went straight as an arrow and it didn’t talk to me. We’ll learn from it and move on.

My crew chiefs Jon Schaffer and Jason McCulloch are already working on it back in Indy. You stick by your people. You know who you got that are good and you just keep working. We got hit in testing and we starting fixing something over here and you change your tune up to fix that and you go through a process and you get lost. Luckily, we got Jimmy Prock and Daniel Hood and Brian Corradi all these guys.”

You gave Courtney a pep talk. How important was it for you to have her keep racing?

“I came back to see her after the winner’s circle and she came over and all she said was I told her from the hospital to go kick their butts. Nothing personal these are all good guys, but you want to win and, on a day when a lot of stuff goes wrong, we came out with the win and that is what it is all about. She did her job. And she got that paycheck which we can use to buy some parts.

What is amazing to me is I made some changes and it has really helped us. Hood teaming up with Corradi and to bring in his expertise on these cars. To get Courtney the win that was big for me. I was laying in the hospital and I wanted to get back to the racetrack, but I had to go through the ritual and the routine to go through it. I have been knocked out before. If you drink in bars like I used to over the last four decades you get knocked out for running your mouth. The bottom line is I am back, and my baby girl Courtney Rahal ended up winning the race. That keeps us alive. They always said the best cure for a sickness was an ET slip and boy isn’t that the truth.”

How do you keep a positive attitude after these kinds of issues?

“Everything that could go wrong has gone wrong in the last two weeks. It makes me question myself but know one thing. I love driving these Fuel Funny Cars. Age is not a factor here. I am 68-years-old and I am not brain dead unless I knocked my brain apart. Bottom line is the car does the running for me and all I have to do is react which is what I have done well all these years. I try to cut a light and get it down the groove A to B. That is what it is all about.

It is what we do. Like the people in the circus like the trapeze people. I wasn’t like a little league dad who said you are going to play baseball. I was never like that. They were taking welding in high school and they were learning this job before they graduated. I didn’t even know they were taking those classes I was on the road.  They wanted to drive these race cars. It’s the greatest show on Earth. We are PT Barnum at 300 miles per hour and we love it. I asked Brittany after she won the Top Fuel championship if she wanted to walk away right now and she said I can’t even believe you are saying that dad. Walk away? This is what we do she was right back in the race car in Phoenix and I’ll be right back in Gainesville. I am lucky because I have a few weeks off.”

How did you feel about Brittany getting back into her car after her wreck at the Winternationals?

“I felt like I was going to puke. That is a terrible word. But you know, that’s my baby girl first of all. You worry about what all is going through her head. I know the drill and I have been through it all. I have had all the nights laying there where you can’t sleep because the next day I have to race. I know how it all works because I have lived it. She doesn’t know that, so I know the gut ache of getting back in the car of qualifying was tough. The crash was tough, but it was not as tough as getting back in that race car. That is the hard part. Me, I know how to turn off the switch and do it. I know she struggled with it. What made me so proud was she did it. She got back in the car and did it. I have to give Don Schumacher Racing credit for building that canopy. We’re drag racers we don’t want to get hurt.”

What is the effect this all has had on your wife Laurie?

“It is hard on her and she knows the drill with me and what we have been through. We are in the entertainment business. We are PT Barnum at over 300 miles per hour and it is pretty amazing the show that we put on. This isn’t the kind of show we like to put on. We like to put on a show where it is side by side racing. Sometimes drama plays into it but nothing like the police department or fire department and certainly not the people in the military. They live it day to day. Bottom line we are just race car drivers and we love it. That is what we do and we love to entertain you.”

There were rumors by fans on social media that you might be announcing your retirement.

“Why would I do that? I am learning how to do this finally. I am going to meet with my crew chiefs and talk about all of it. I have been struggling with some things and the financial cost but Monster is with us, Advance Auto Parts, Auto Club and PEAK gave me a lifetime contract. I won the round lucky or not. Right now, I have to get my ole race car back on the race track, but we have to analyze it first. Luckily, we got three weeks. It has been a little bit of overload with Brittany. To retire and tell Brittany, who just went through hell in Pomona and then mentally went through hell to get back in the car, which is worse than the crash, to go out there with Alan Johnson, Brian Husen and that Monster Energy team, and step back on the gas, that is the tough one. I have done it a million times, so I know the drill. To tell her I am not going to come back we might as well not even have this conversation. I told you they will drag me out kicking at the end.”