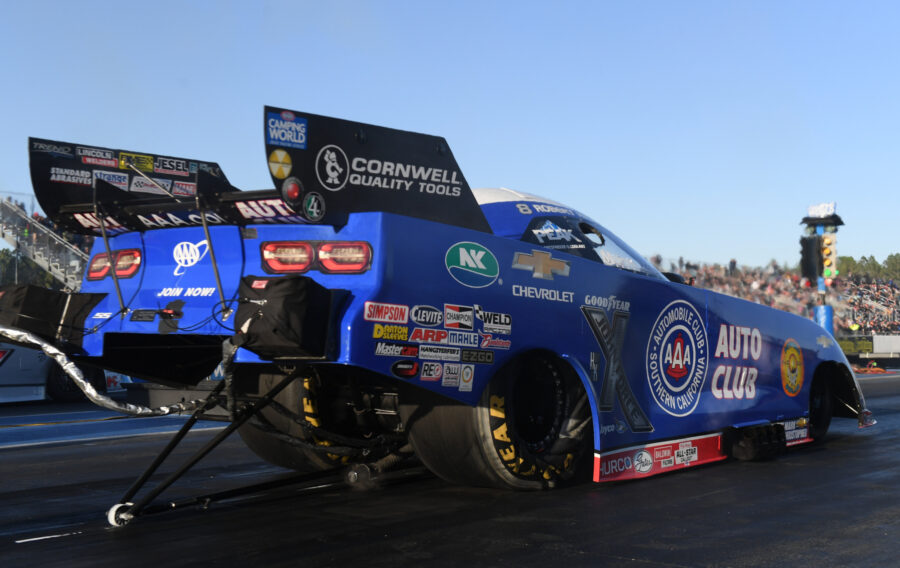 GAINESVILLE, Fla. (March 12, 2022) – For the 72nd time in his career, Robert Hight and the Automobile Club of Southern California Chevrolet Camara SS team secured the No.1 qualifying position Saturday at the Amalie Motor Oil NHRA Gatornationals at Gainesville Raceway. Brittany Force and the Monster Energy team sit No. 2 in Top Fuel after winning their first round of the Pep Boys NHRA All-Star Callout specialty event. Austin Prock and the Montana Brand / Rocky Mountain Twist team are eighth while John Force has the PEAK / BlueDEF PLATINUM Chevy sitting 15th.

With only one run due to morning rain and cold temperatures making it unsafe to run a second session, Hight, who is in the points lead after opening the season with back-to-back victories, laid down an impressive 3.831-second pass at 333.41 mph. Hight now has four No. 1s at Gainesville Raceway including his first career No. 1 in 2005.

“I wasn’t expecting to be number one. I talked to Jimmy before the run, we backed this thing down – we just needed to make a good run so we had a solid baseline for tomorrow. They told me it ran .83, I was surprised. It shook really bad out there; it almost didn’t make it, but it was weak shake, so that’s something that’s easy to fix for tomorrow. If it’s too aggressive, it’s a little tougher to fix that,” said Hight who will run against John Smith in the first round. “Tomorrow we’ll have to pick it up a little bit but when we do that, this Auto Club Chevy is going to run even better. It’s amazing. It’s fourteen out of fifteen runs to start the season that it’s run in the 3.80s. The one run that it didn’t make it, we had to put a new clutch disc in and it threw us a curve.”

“Our enemy in these cars is track temperature. If it’s too cold, that’s your enemy. If it’s too hot, that’s your enemy. When it gets cold you’ve got to be very, very careful, and tonight it was getting cold enough – and that’s why mine shook at the end, because we were on the weak side,” Hight continued. “So tomorrow, if you’re on the other side of it, too aggressive, you’re going to smoke the tires. It’s a balancing act and I honestly feel like I have the best guys in my corner for conditions like this.”

After calling out Antron Brown as her first-round opponent in the Pep Boys NHRA All-Star Callout specialty race, Brittany Force and Monster Energy team left nothing to chance powering to a 3.684-second pass at a track record 337.75 mph for the win and a No. 2 qualifying finish.

Due to inclement weather, Force and the Monster Energy team will have to wait until the U.S. Nationals in Indianapolis, Indiana to choose their semifinal opponent and continue their battle for the Pep Boys All-Star Callout title and $80,000 prize.

Force and the Monster team line up with Clay Millican in the first round of Gatornationals’ eliminations.

“It’s day two of the Gatornationals and we got one run in. It’s crazy because it’s our first run of the weekend and it’s an elimination round. We got the win in the All-Star Call Out over Antron and we get to play a little bit longer in this thing. We want to win it, there’s money on the line, there’s a trophy on the line, and just a new title on the line, so we’re going to chase it down,” Force said. “We’re excited. We got past that first one and now tomorrow we go right into race day, so it’s a new mindset, a new game. We’re looking for four runs tomorrow, and to win here at the Gatornationals.”

Austin Prock and the Montana Brand / Rocky Mountain Twist dragster team had what appeared to be a solid 3.761-second pass at 326.71 mph. However, the Top Fuel up and comer had an engine explosion in the lights. Prock will start race day from the No. 8 position against Billy Torrence.

“We weren’t trying to go up there and run low E.T. by any means, just trying to get a nice, safe pass down the race track in this Montana Brand / Rocky Mountain Twist dragster, and that’s what we did,” Prock said. “We wounded the engine a little bit, so probably could of run a little bit better, but we’ll get it sorted out tomorrow. We have a big first round match up tomorrow against one of the Capco teams. I’m looking forward to racing Billy tomorrow. We’ll see if we can get by that and we can go some rounds tomorrow.”

The PEAK / BlueDEF PLATINUM Chevy had issues early on their one qualifying run. John Force was up in smoke almost immediately and coasted to an 8.924-second pass at 75.58 mph to line up with Tim Wilkerson on Sunday.

“Little bit of a wild weekend here with the rain and the cold, but this PEAK team is in the show and that’s all that matters,” said Force. “Great for Austin and Brittany and Robert to run well in that one round with our new partner NK Seeds. Happy to have them on board and hope we can all go some round and get in that winners circle for them.”

Eliminations at the Amalie Motor Oil NHRA Gatornationals are slated for Sunday morning at 11 a.m. but are subject to change based on weather conditions. Television coverage continues on FOX Sports 1 (FS1) Sunday at 7 p.m. ET.