ROBERT HIGHT AND JOHN FORCE NO. 2 AND 3 FRIDAY AT HEARTLAND MOTORSPORTS PARK  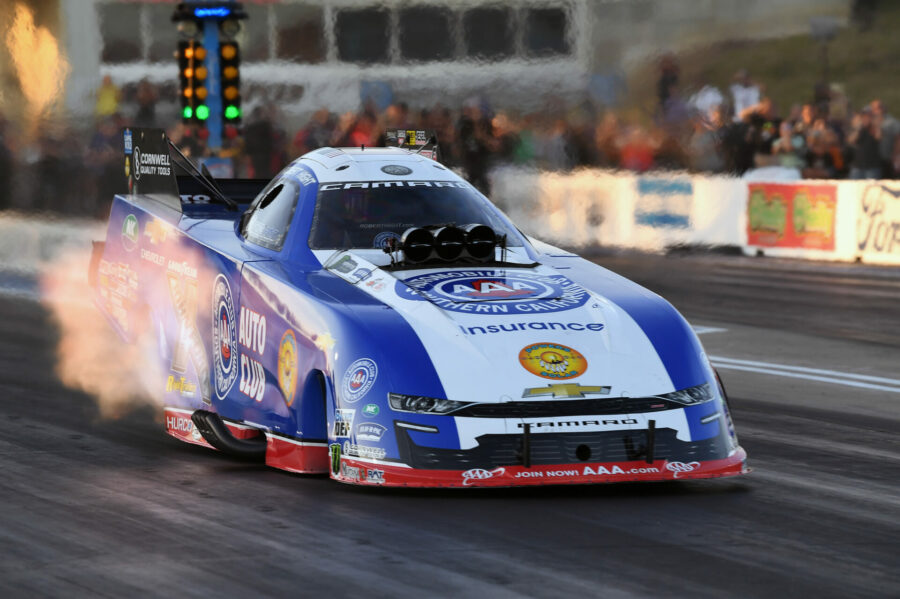 TOPEKA, Kan. (Aug. 12, 2022) – Robert Hight and the Automobile Club of Southern California Chevrolet Camaro SS team lead John Force Racing sitting No. 2 after the first day of qualifying at the Menards NHRA Nationals at Heartland Motorsports Park. John Force has the PEAK Antifreeze and Coolant Chevy right behind Hight in No. 3. Brittany Force in the Monster Energy / Flav-R-Pac dragster went to No. 6 while Austin Prock and the Montana Brand / Rocky Mountain Twist dragster went to No. 16.

Points leader Robert Hight and the Auto Club Chevy look on par for another impressive weekend with their 3.931-second pass at 323.81 mph that has them No. 2. Looking to collect the regular season championship, Hight collected two bonus points for Friday’s run.

“Pretty good run for this Auto Club Chevy,” said Hight who is coming off his sixth win of the season at the Northwest Nationals outside of Seattle. “It was important to get a clean pass down tonight. Going to be really warm conditions tomorrow but after how we did in Seattle, I’m feeling good about this combination in the heat.”

“Good start to the weekend here in Topeka for this PEAK Chevy,” said Force who earns a bonus point for his efforts. “Going to be a warm one all weekend long so every run will count for race day. We’re in the show and that’s what matters. Tomorrow, we get two more try and really get set for race day.”

Back in the black and green livery of her Monster Energy / Flav-R-Pac Chevy dragster, Brittany Force had a clean pass for their first run down Heartland Motorsports Park. The Monster team laid down 3.800-seconds at 324.59 mph.

“Bit of a rough start for our Monster Energy / Flav-R-Pac team here in Topeka. First qualifying run of the night and we ran a 3.8 at 324 mph which puts us in the No. 6 position,” said Force who shared the winner circle with her father in 2021 for the first time in their career. “We were looking to run better than that but get two more shots tomorrow before heading into race day.”

Austin Prock and the Montana Brand / RMT team had to shut off early during their first run on at the Menards NHRA Nationals. They’ll look to improve from the No. 16 spot.

“Tough way to start the weekend for this Montana Brand / Rocky Mountain Twist team. We missed on tune up tonight and the car was down on power at the hit. It gets tricky in this heat and humidity and we missed it,” Prock said. “We have a lot of work to do. Two runs tomorrow will be in the heat, so they’ll be important for Sunday. If we can get it done tomorrow, we’ll be ready for race day. We’re definitely due and have been moving in the right direction.”

Competition at the Menards NHRA Nationals at Heartland Motorsports Park continues with qualifying on Saturday at 3:00 and 6:00 p.m. with eliminations Sunday at 10:30 a.m. Television coverage of the event will begin with qualifying on Saturday at 4:30 p.m. ET and Sunday at 1 p.m. ET on FOX Sports 1 (FS1). For eliminations, the broadcast will switch to FOX Broadcasting Network on Sunday at 2 p.m. ET.