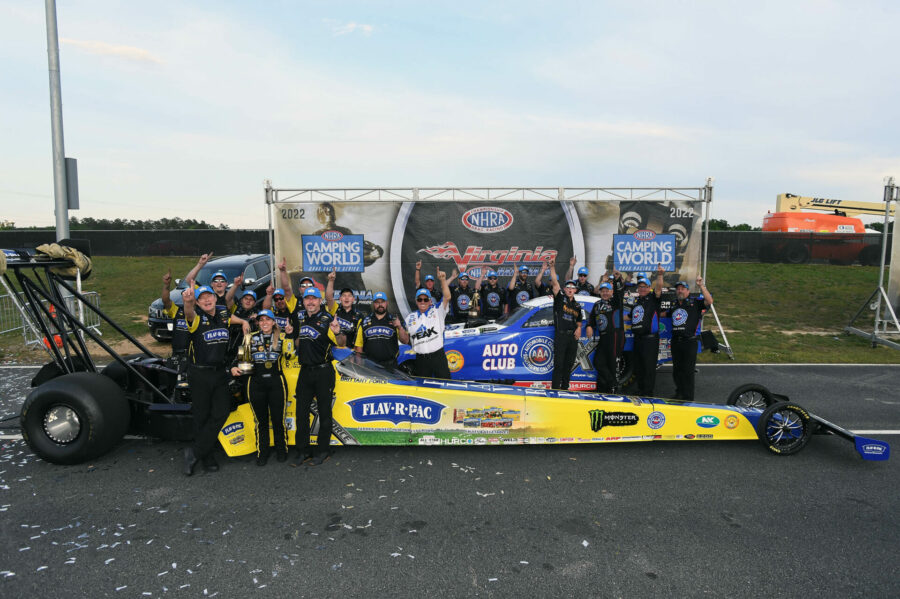 DINWIDDIE, Va. (May 15, 2022) – For the third time in their careers, Brittany Force with her Flav-R-Pac / Monster Energy dragster and Robert Hight in his Automobile Club of Southern California Chevrolet Camaro SS have doubled-up for John Force Racing Sunday at the Virginia NHRA Nationals at Virginia Motorsports Park. Austin Prock in the Montana Brand / Rocky Mountain Twist dragster and John Force with the PEAK / BlueDEF PLATINUM Chevy each had semifinal exits.

Coming into the day having secured their 34th career No. 1 qualifier, Brittany Force and the Flav-R-Pac team enjoyed a bye for their first round. They would be thankful for the run as they smoked the tires almost immediately. In the second round, the David Grubnic and Mac Savage led team appeared to have figured things out laying down a stellar 3.788-second pass at 328.94 in the heat of the day to defeat Shawn Langdon who went only 4.512 at 203.22.

En route to the finals, Force would defeat Mike Salinas with a 3.770-second pass at 334.07 mph before taking on reigning four-time world champion Steve Torrence in the finals. Force would have the starting line advantage and never trail going 3.770 seconds at 334.07 mph bettering Torrecne’s 3.781 at 326.24 for her third win of the season, 14th of her career and first at Virginia Motorsports Park.

“This has been our greatest season yet,” Force said. “To come on strong with this many wins, I’m so excited. We’ve never won here in Virginia, so it was very cool to get this win. This Wally (trophy) is for (crew chief) David Grubnic because he makes the impossible happen. Any win is special, but to qualify No. 1, set the track record and then get the win, it’s great. Robert and I seem to have a lot of luck together, and it was great to see him win. Our whole team has come a long way and we’re already ahead of ourselves from last year.”

Coming into race day No. 10, Robert Hight and the Automobile Club of Southern California Chevrolet Camaro SS team showed no signs of the struggle they faced in qualifying. In a clean side-by-side race against Tim Wilkerson, Hight would handle his Chevy to a 3.919-second pass at 329.83 mph to better Wilkerson’s 3.942 at 325.92. The win would set Hight up to run reigning world champion Ron Capps. Capps would run into trouble early while Hight and the Auto Club Camaro would sail to a 3.935 at 325.30 for the win.

Matched up with Bob Tasca III in the semifinals, Hight would leave the start second, but the Chevy Camaro would chase down Tasca to go 3.906-seconds at 324.20 mph to Tasca’s 4.015 at 328.06. Running against Matt Hagan in the finals, Hight and his Jimmy Prock and Chris Cunningham tuned Chevy would maintain their high performance to f 3.907-seconds at 328.86 mph to defeat Hagan and his 3.948 at 327.59. It would be his 56th career victory, third of the season and first at Virginia Motorsports Park.

“I think we’ve had three battles with Hagan this year and it seems like it happens every week,” Hight said. “I think we’ve got the best two cars in the class and when you race them, you better be up for it. They were better than us in qualifying, but what a difference a day makes. We had mechanical failure the first run and it set us behind the whole weekend. But when you’ve got this great team, you just believe in them, and they just navigated things great today. We’re going to have a lot of these battles the rest of the year and hopefully we can just keep winning them.”

After running his career best to qualify No. 2, Austin Prock would have an impressive 3.727-second pass at 333.16 mph to defeat Lex Joon who ran into trouble early and would creep across the finish line at 20.760. The Joe Barlam and Rahn Tobler Montana Brand dragster wouldn’t let up in the second-round blast to a 3.837-second pass at 313.88 mph to send veteran racer Doug Kalitta packing.

Prock would face Steve Torrence in the semifinals and while Prock would have a slight starting line advantage on the four-time champ, Prock would run into tire smoke to go only 4.932-seconds at 155.85 mph. Torrence would advance to the finals on a 3.781 at 326.24.

“It was a great weekend for this new Montana Brand / Rocky Mountain Twist team. We made extremely competitive runs and showed we can run with any of them,” Prock said. “Our time is coming, we’re on the right track and made huge headway this weekend. We wanted an all JFR final but came up short. We will be ready to go for a win in Epping.”

Without a clean pass throughout qualifying John Force and the BlueDEF Chevy managed to throwdown a 3.922-second pass at 329.67 mph to send J.R. Todd and his 3.994 at 325.85 mph pass home. With Danny Hood and Tim Fabrisi, Force would continue to be consistent going 3.992 at 329.91 mph to defeat longtime rival Cruz Pedregon, who ran into tire smoke. Force would be over eager in the semifinals against Matt Hagan. The 16-time world champion would red-light, giving Hagan the win and path to the finals.

“Well, I just got over excited, I guess. I was amped up and I was ready to go, I wanted to win,” Force said. “But, if this PEAK Chevy can’t get the job done, I’m glad it’s Robert and that Auto Club Chevy. Over there in dragsters, just so proud of that Flav-R-Pac car for Frank Tiegs getting the job done. Brittany and Grubnic and Savage, that whole team really put in the work this weekend. Prock with Barlam and Tobler, they are really coming around, really looking good. It was just a great weekend for John Force Racing.”