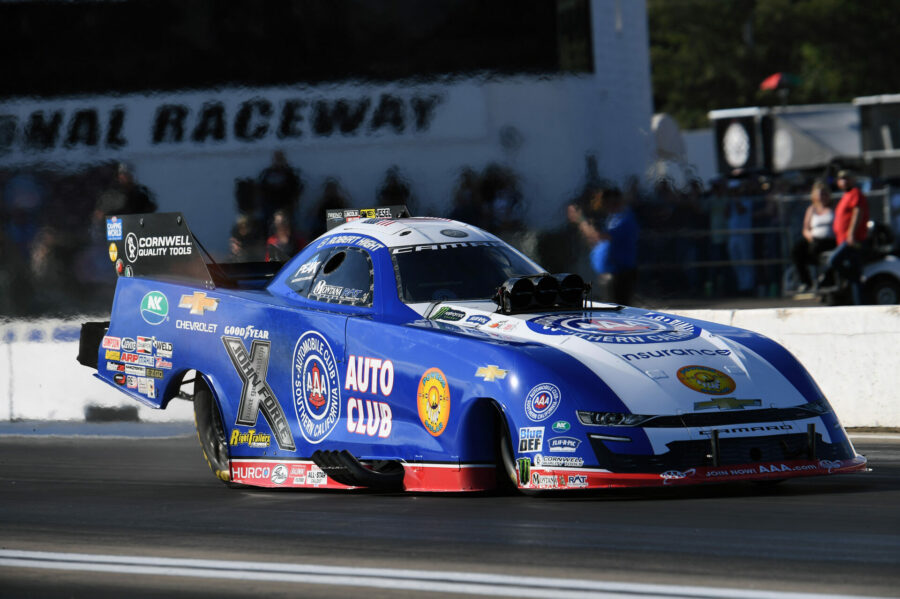 The Automobile Club of Southern California Chevrolet Camaro SS and Monster Energy / Flav-R-Pac dragster took Robert Hight and Brittany Force, respectively, to the semifinals of the Lucas Oil NHRA Nationals at Brainerd International Raceway. Austin Prock and the Montana Brand / Rocky Mountain Twist dragster as well as John Force and the PEAK Antifreeze and Coolant Chevy had first round exits.

Unwavering through qualifying, No. 2 qualifiers Robert Hight and the Auto Club Chevy kept consistent in the first round with a 3.874-second pass at 330.63 mph to defeat Steven Densham’s 3.967 at 327.43. Much like teammate Brittany Force in Top Fuel, Hight had to work for his second-round win. Up in tire smoke against J.R. Todd, both Funny Car champions pedaled to the finish line hurting their engines. Hight would have a 4.356-secodn run at 284.27 mph to send Todd’s 4.451 at 221.16 home.

Facing most recent event winner Bob Tasca III in the semifinals Hight and the Auto Club Camaro would again smoke the tires. Hight would be unable to get the Chevy hooked back up and have to watch Tasca go past for a 3.926 at 326.08. Hight would officially go 4.646 at 200.44.

“Disappointing end to what was shaping up to be a pretty good weekend. These Auto Club guys, they worked really hard to get this Chevy Camaro ready for the semifinals,” Hight said. “I’ve said it before, this is such a competitive field. You really have to be perfect and maybe get a little luck every once in a while. We had already planned to test tomorrow, hopefully get one step closer to being perfect, get us ready for Indy and the Countdown, that’s’ where it really matters.”

Coming into the day as the No. 1 qualifier, Brittany Force and the Monster Energy team earned a bye in the first round of eliminations. The David Grubnic and Mac Savage tunes dragster did not waste the uncontested pass laying down the quickest run of the entire event at 3.646-seconds and 333.58 mph. In the second round, it was Force who showed her skills pedaling her way to a 4.394-second pass at 255.63 mph to defeat Billy Torrence’s 4.586 at 213.40.

It would be from one Torrence to the next for Force. In the semifinals, Steve Torrence, Billy’s son, and Force would go up in smoke at almost identical times. Force would have a wild ride, pedaling the Monster machine once before having to lift and coast to 10.392-seconds and 66.09 mph while Torrence would pedal his way to a 5.400 at 276.07.

“Interesting weekend for our Monster Energy / Flav-R-Pac team at BIR this weekend. We made three great runs during qualifying, our best a 3.661 at 334 mph that pushed us to the top. Today we improved in E1 running a 3.646 333,” Force said. “In the second round we had to work for it. The warmer track made for big changes for everyone. The car went up in smoke and I pedaled for the win light. Unfortunately, in the semis, we didn’t have the same luck. Our car got up on the tires right at the hit and that was it for us. We kept the points lead and plan to turn this thing around in a couple weeks at the U.S. Nationals in Indiana.”

After a turnaround qualifying effort that consisted of four solid passes down Brainerd International Raceway, something the team hadn’t done since the season opener, Austin Prock and the Montana Brand / RMT dragster got into a pedal fest in the first round against Billy Torrence. Prock would come up short with a 4.480-second pass at 237.21 mph to Torrence’s 4.050 at 236.38.

“I feel like I let the guys down there. I know how to drive the car better than that and get it hooked back up sooner. There are times when the driver has to have the team’s back and that should have been one of those times. This Montana Brand / Rocky Mountain Twist team was having a good weekend, really started to turn things around. We’ll keep at it, move onto Indy where we get points and a half. We’ll be looking for a big points weekend there heading into the Countdown.”

John Force and the PEAK Chevy made their best run of the weekend in the first round of the Lucas Oil Nationals. Unfortunately, their best wasn’t enough. Force would handle the Camaro to a 4.022-second pass at 284.99 mph that was bettered by Ron Capps’ 3.931 at 325.45.

“Rough weekend for this PEAK Chevy team. We struggled to get down the track. But everyone else, Robert Hight in the Auto Club Chevy, Brittany in the Monster Dragster and the Prock kid with Montana Brand, they all ran well,” Force said. “We’ll be fine, we’ll get it figured out. We’re in the Countdown, that’s what matters. Points will reset and we’ll be ready when it counts.”