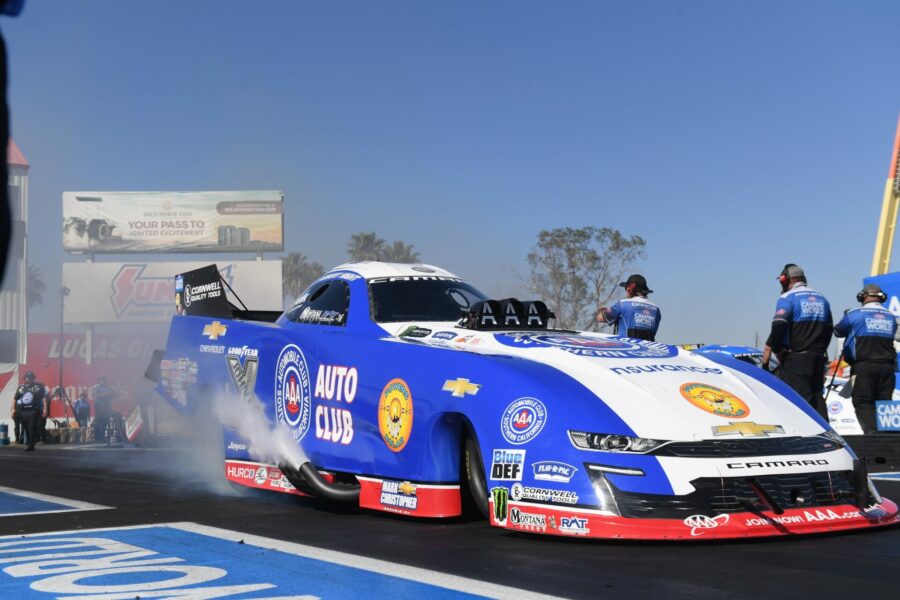 LAS VEGAS (March 30, 2022) – Robert Hight and his Automobile Club of Southern California Chevrolet Camaro SS team have waited a long two weeks to get back the track at this weekend’s NHRA Four-Wide Nationals at The Strip at Las Vegas Motor Speedway. Just the fourth event out of 22 on the NHRA Camping World Drag Racing Series season, the Four-Wide Nationals is the first of two events where competitors will line-up in fours instead of two.

Hight is off to the best start of his career after winning the season opening Winternationals at Auto Club Raceway at Pomona, Calif. and the Arizona Nationals at Phoenix. Hight went onto secure the No. 1 qualifying position at the most recent Gatornationals in Gainesville. He enters the Vegas Four-Wide as the Funny Car points leader. With his back-to-back wins, Hight extended to 17 the number of seasons in which he has won at least one tour event for Auto Club. That is every season in which he has contested the championship. Hight also has recorded at least one No. 1 start in those 17 seasons.

“It’s been a great start to the season. We’ve been really consistent. Gainesville was tough for everyone and having two weeks off is just brutal,” Hight said. “This Auto Club team, we’re feeling good. We took things back to how we were running in 2019 and it’s paying off. Hopefully that continues and we get some win lights in Vegas.”

“Four-Wide is really entertaining for the fans. Four cars lined up, the power, the speed. There’s a lot going on but as the driver, I just choose to worry about what I can control. Focus on my tree and run the race,” Hight said. “Sunday, eliminations, you get some help, just have to be top two of the first two rounds and there’s only three rounds. It’s a great weekend to gain some points, build our lead.”

Qualifying at the NHRA Four-Wide NHRA Nationals takes place Friday and Saturday with two sessions at 1 p.m. and 3:30 p.m. (PT) on each day. Eliminations are slated to begin at noon on Sunday. Racing action will be televised on FOX Sports 1 (FS1) and begins with qualifying Friday at 7 p.m. ET and continues Sunday at 12:30 p.m. ET. Eliminations will air Sunday at 7 p.m. ET.