ROBERT HIGHT AND AUTO CLUB NO. 2 FRIDAY AT MILE-HIGH NATIONALS  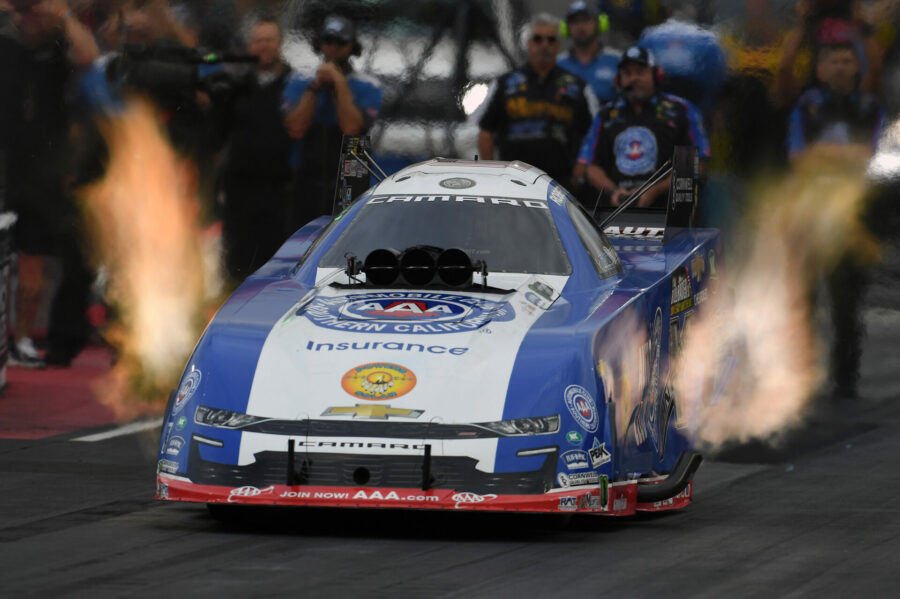 MORRISON, Colo. (July 15, 2022) – Robert Hight and the Automobile Club of Southern California Chevrolet Camaro SS team finished day one of the Dodge Power Brokers NHRA Mile-High Nationals at Bandimere Speedway in the No. 2 position. John Force and the PEAK Antifreeze and Coolant Chevy are sitting in the No. 4 spot while Austin Prock has the Montana Brand / Rocky Mountain Twist dragster sitting No. 7 with Brittany Force and Flav-R-Pac / Monster Energy dragster in 12th.

Robert Hight handled the Auto Club Chevy to a clean 3.987-second pass at 311.92 mph in the first qualifying session to put them in the No. 4 spot heading into the night session. Hight and the Jimmy Prock and Chris Cunningham tuned Auto Club Camaro improved to the No. 2 spot with their stout 3.936 run at 324.51 that also earned them two bonus points for being second quickest of the session.

“Not a bad way to get the weekend started here at Bandimere. Hopefully it sets the tone for the whole weekend and the whole Western Swing,” Hight said. “Good first two runs to help us get set. Tomorrow we’ll be racing a little earlier, conditions will be a little warmer. Jimmy and Chris, they’ve got a handle on this mountain, so we’ll be good, they’ll be really dialing this Auto Club Chevy in.”

John Force and the PEAK Camaro would go 4.020-seconds at 318.47 mph to start off the Mile-High Nationals. Their efforts put them in the No. 5 spot. In their second run, crew chiefs Danny Hood and Tim Fabrisi tuned the PEAK Chevy to a 3.978 at 325.07 to move Force into the No. 4 spot with two qualifying sessions left on Saturday.

“Pretty good day for this PEAK Chevy team. Got it down there both runs, got some good data,” Force said. “Great to be back racing at ‘God’s Mountain.’ Getting back in that Chevrolet Funny Car out here has really put me in a good mood. I’m ready to do it again tomorrow and go some rounds on race day. NK Seeds is out here with us and Gates Belts has their headquarters just downtown here, great to have them with us and all of my sponsors. Shaping up to be a good weekend.”

Brittany Force and the Flav-R-Pac team had a hole out and went up in tire smoke in their first attempt down Bandimere Speedway for a 7.174-second pass at 86.34 mph. In the second session, the Flav-R-Pac dragster shut off early to go 4.198 at 201.52 and put Force No. 12.

“Our Flav-R-Pac team got off to a slow start this weekend here at Bandimere Speedway. Two runs that were far from our goal,” Force said. “First run we had a cylinder out from the step. Second run pan pressure shut our car off early. The track looked great the second run and we were pushing to lay down a good number. Our early numbers were good. We will readjust going into tomorrow. The positive is we have an answer so we can fix it.”

Austin Prock and the Montana Brand / RMT team laid down a solid 3.904-second pass at 312.86 mph to temporarily put them in the No. 2 spot and earn two bonus points. In the second session, the Montana Brand dragster would lose traction early and coast to a 6.226 at 113.24 landing Prock in the No. 7 spot.

“Good start to the day here at Bandimere Speedway, we came in here a little blind on our setup and made the second quickest run of the first session,” Prock said. “On that second run, we came in swinging. This Montana Brand / RMT dragster left hard with the wheels up and shot me inside, I tried to bring it back but it was too late and puffed the tire. We’re making adjustments now and will go for it again tomorrow night.”

Racing at the Dodge Power Brokers NHRA Mile-High Nationals at Bandimere Speedway continues with a second day of qualifying Saturday at 3:30 and 7:00 p.m. Eliminations are slated to begin Sunday at 11 a.m. Television coverage of the event continues with a second qualifying shows on FOX Sports 1 (FS1) Sunday at 11 a.m. ET. Eliminations will air on FOX Broadcasting Network Sunday at 4 p.m. ET.