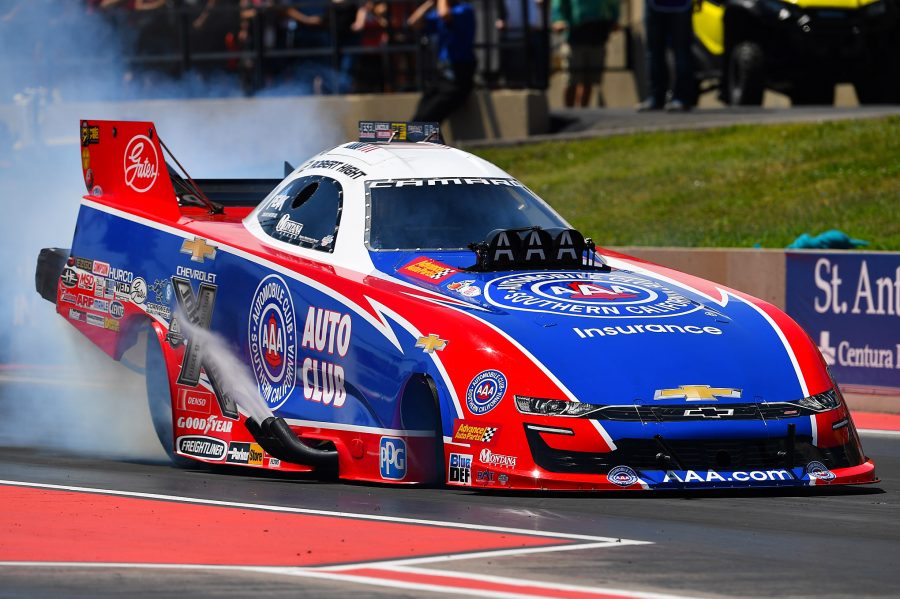 MORRISON, Colo. (July 21, 2019) — Robert Hight and the Automobile Club of Southern California Chevrolet Camaro SS team continued to build on their points lead Sunday at the Dodge Mile-High NHRA Nationals when they made their third semifinal appearance of the season. Brittany Force solidified her spot as a top contender in Top Fuel when she raced her way into the semifinals with her Carquest Brakes team, while John Force and PEAK Coolant and Motor Oil moved to No. 3 with a quarterfinal finish and rookie Austin Prock had a first round exit after a solid qualifying effort in his Montana Brand Rocky Mountain Twist dragster.

After blasting his way to the top of the Funny Car qualifying ladder with one fell swoop in the form of a 3.976-second pass at 326.16 mph Saturday night, Hight entered race day with a valuable first round bye. With a solid 4.055-second run at 317.72 mph that was second quickest of the round, Hight and the Auto Club team would gain lane choice over Shawn Langdon in the quarterfinals. Hight would improve in the second-round matchup powering his Chevy Camaro down the track at 322.04 mph in 4.018-seconds defeating Langdon’s 4.160 at 294.82 to set up a semifinal matchup with rival Bob Tasca III.

Hight’s battle for his 50th career victory was cut short when his Auto Club Camaro spun the tires down track and took a left turn towards the wall forcing the two-time champion to shut the car off. Tasca would narrowly get around Hight and his 4.160-second pass at 248.20 mph with a 4.114-second pass at 312.93 mph.

“This Auto Club team is leaving with an even bigger points lead; we can’t complain about that. The tires spun on that semifinal round, it was just going way too fast and that wasn’t by design. I tried to stay in it but once it took that turn, I had to let up. I didn’t see him the whole way. I know Jimmy Prock and Chris Cunningham, and the guys, we’re pretty disappointed about it. That should have been a win for us. I thought we were going to get 50 today but heading to Sonoma where we won last year and where we’ve set some records, I’m excited to see what we’ll accomplish.”

Brittany Force started race day with a round one win when she launched her Carquest Brakes Top Fuel dragster to 3.877-seconds at 276.58 mph to advance past Mike Salina’s 3.952 at 318.09. In the quarterfinals, Force competed against Scott Palmer and kept the consistency making a 3.861-second pass at 316.23 mph powering past Palmer’s 3.885 at 319.14 to head to the semifinals. Facing reigning Top Fuel world champion and eventual event winner, Steve Torrence in the semis for the second time this season, Force dropped a cylinder at the start to run a 4.334-second pass at 203.16 mph and fell short to Torrence’s 3.821 at 324.67.

“I’m very happy with our weekend here on the mountain in Denver at Bandimere Speedway. We got off to a rough start on Friday. We made some big changes coming into Saturday, put a whole new injector on it and started to figure things out,” said Force. “We came in here on race day and ran .87, .86 – two awesome runs – and went to the semifinals. This Carquest Brakes team moved up to No. 2 in points. It’s an awesome position; where we want to be closing in on the Countdown.”

Making his 775th race day start, Funny Car legend John Force took the win light in the first-round of eliminations at Bandimere Speedway against reigning Funny Car world champion, J.R. Todd when he pedaled his PEAK Coolant and Motor Oil Chevy Camaro to a 4.276-second pass at 312.57 mph bettering Todd’s 4.334 at 236.42. In the quarterfinals, Force took on longtime rival Cruz Pedregon running a 4.132-second pass at 310.70 mph but it wasn’t enough to get by Pedregon’s 4.099 at 314.24.

“Well, we didn’t get that 150 but we’re getting closer. My PEAK team is working hard to give me a good race car and I have it, I just need to do my job in the driver’s seat and go rounds. There’s been a lot of changes to this car since Courtney drove it and it’s taking me some time to get used to that, but we’ll get there,” said Force. “Brittany and Carquest Brakes, and Robert with Auto Club both did good today and went to the semis, Brittany moved up in the points. Austin Prock and the Montana Brand / Rocky Mountain Twist team are getting there and those guys are working hard. We’re all ready for the next one.”

Austin Prock and the Montana Brand / Rocky Mountain Twist team packed up early Sunday when they had a first-round exit to Richie Crampton. Prock launched hard to get the starting line advantage with a .045 light to Crampton’s .072, but lost traction and had to pedal his hot rod before clicking it off down track. His 4.856-second pass at 163.41 mph wasn’t enough to get past Crampton who had a solid pass at 3.858 and 314.02.

“Not the type of race day anyone wants. We had a decent showing in qualifying so the weekend wasn’t all bad but it’s time to move onto the next one. Conditions are just so different here. This Montana Brand / Rocky Mountain Twist team will just pack up and get ready for Sonoma. Luckily we don’t have to wait very long to get back out on the track. Mike Green and Ronnie Thompson and the team, we’re all working hard to get this race car to go rounds.”