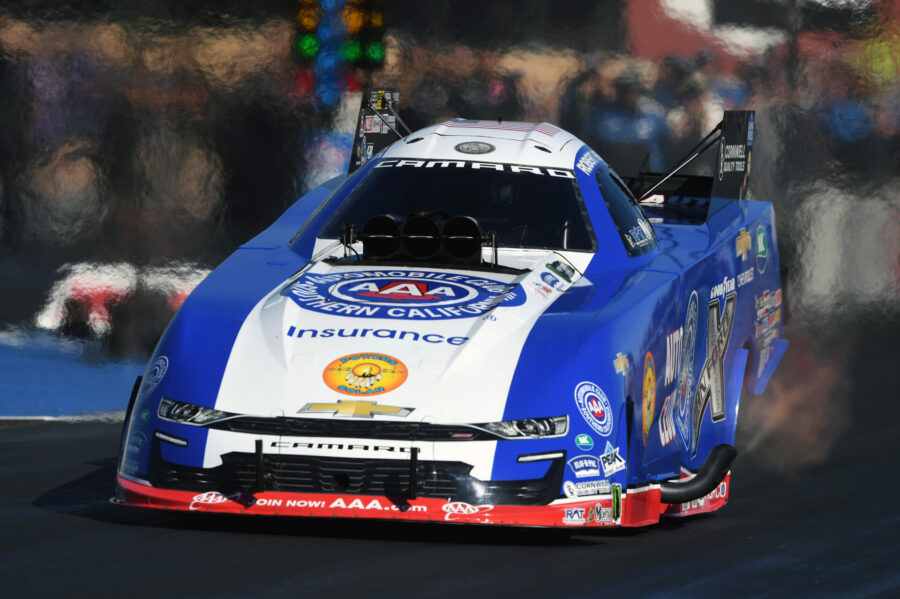 SONOMA, Calif. (July 23, 2022) – Robert Hight and the Automobile Club of Southern California Chevrolet Camaro’s 3.825-second pass from Friday night at the DENSO NHRA Sonoma Nationals at Sonoma Raceway held up to earn the three-time world champion his third No. 1 of the season, fourth at the Northern California facility and 74th of his career. The Funny Car points leader’s performance has the Auto Club Chevy cued up to win a record setting fourth-consecutive victory at Sonoma Raceway. Hight and the Auto Club Camaro celebrated in the winner’s circle at Sonoma in 2018, 2019 and 2021 (the Sonoma Nationals were not contested in 2020).

After concluding three rounds of qualifying at the NHRA Sonoma Nationals, the John Force Racing Top Fuel teams are lined up to face each other in the first round with Brittany Force and the Flav-R-Pac / Monster Energy team No. 5 and Austin Prock and the Montana Brand / Rocky Mountain Twist team No. 12. Team namesake John Force and the PEAK Antifreeze and Coolant Chevy will start race day from the No. 15 position.

Looking for their fifth overall victory at the Sonoma Nationals, Hight and the Auto Club team came out Saturday afternoon to run only 4.540-seconds at 186.77 mph in the second qualifying session. The points leader and winner of four events on tour already picked things back up in the final session earning two bonus points for a stout 3.889-second pass at 329.50 mph. With their 3.825 pass from Friday earning them the top spot, Hight will line-up with Jeff Diehl in the first round.

“That last run was really nice. What impressed me the most were my crew chiefs Jimmy Prock and Chris Cunningham, they tuned that off our first run today. We almost made it down the track and they just made tiny adjustments to get it down the track. It is so much different from last year when we would have to make these huge adjustments. The car is really responding to what they are doing and we’re so close that they just need to make small changes,” Hight said. “There’s a lot on the line tomorrow, points, working toward a championship and everything else. We just need to take it one run at a time. We are running someone first round, Jeff Diehl, who if we make one mistake, they could take us out. We want to be perfect. The Auto Club guys are going to work hard tonight and come out for that 10:30 a.m. start and take it one run at a time. I know I have the best guys in the business behind me to get this done.”

Brittany Force and the Flav-R-Pac team picked up their performance Saturday afternoon laying down a 3.705-second pass at 335.15 mph to move them into the No. 5 spot heading into the final qualifying session. The Flav-R-Pac dragster would put a hole out early on its final run to go only 7.772 at 79.96. In the No. 5 spot she’ll face teammate Austin Prock in the first round of eliminations.

“This Flav-R-Pac team qualified in the No. 5 spot after running a 3.705 in the second session. Unfortunately, we face teammate Austin Prock first round tomorrow,” Force said. “We are confident we will get this car figured out tomorrow and are looking for four solid passes. This team is looking to get back into another winners circle and would love to do it here in Sonoma, Calif.”

Austin Prock and the Montana Brand / RMT dragster had to pick up their performance in their second qualifying pass after the rest of the class improved and pushed them into No. 17 spot. Crew chiefs Joe Barlam and Rahn Tobler answered the call sending Prock on a 3.815-second pass and into the No. 9 spot. They wouldn’t improve in the final session, shaking the tires and shutting off for a 6.468 run at 93.52 mph shifting into the No. 12 position to unfortunately match-up with Brittany Force in the first round of eliminations.

John Force and the PEAK Auto team did improve performance wise in their second qualifying attempt going 4.757-seconds at 166.70 mph but would shift down to the No. 15 qualifying spot. The final qualifying session wouldn’t bode any better for the 16-time champion. He would cross the finish line at only 5.886 and 116.83. He’ll start race day from the No. 15 spot to face Ron Capps off the effort of their 4.757 pass.

“Little trouble through qualifying but we’re in the show, we’re racing tomorrow, and tomorrow is a new day,” Force said. “We’ve had a great car, found some consistency so we know we can get the job done. Danny Hood and Tim Fabrisi and all my PEAK guys, they’ll be working hard, I’ll do my job and we’ll see how it goes.”

Racing at the DENSO NHRA Sonoma Nationals at Sonoma Raceway continues with eliminations beginning at 10:30 a.m. on Sunday. Television coverage of the event will be on FOX Sports 1 (FS1) for qualifying on Sunday at 1:30 p.m. Eliminations will air on FOX Broadcasting Network Sunday at 4 p.m. ET.