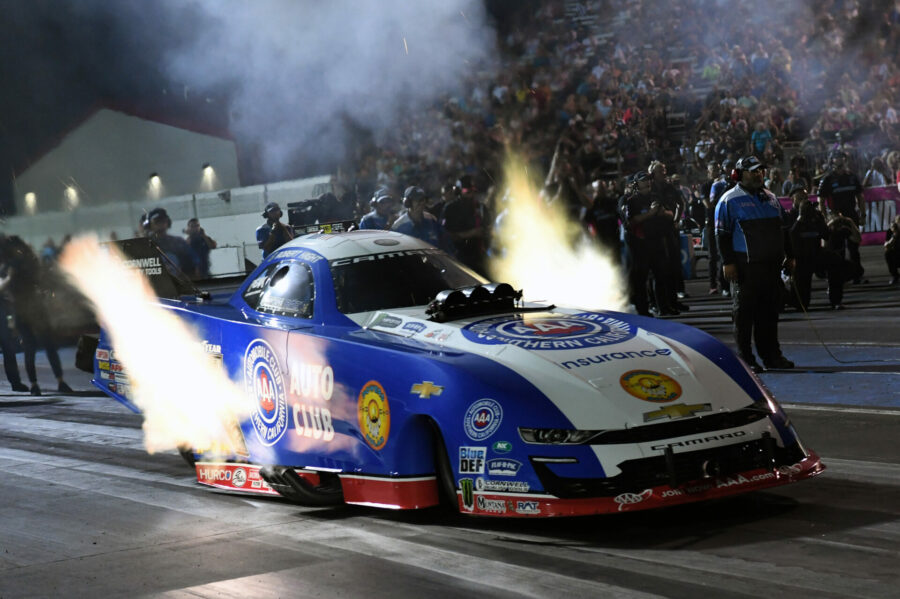 INDIANAPOLIS (Sept. 02, 2022) – Robert Hight and the Automobile Club of Southern California Chevrolet Camaro SS sit in the No. 1 Funny Car spot Friday after one of five qualifying sessions at the Dodge Power Brokers NHRA U.S. Nationals at Lucas Oil Raceway at Indianapolis Raceway Park. John Force has the PEAK Antifreeze and Coolant Chevy in the third spot while Brittany Force with her Monster Energy / Flav-R-Pac dragster is No. 19 and Austin Prock in his Montana Brand Rocky Mountain Twist dragster is No. 21.

Under the lights with header flames lit, Robert Hight handled the Auto Club Chevy to a beautiful 3.870-second pass at 331.94 mph. With points and a half on the table and as the quickest Funny Car of the night, Hight gained four bonus qualifying points.

“This race is like a marathon. You have to take it in strides, one day, one run at a time. Can’t get a better start than that. Really an A+ job to the Auto Club team. We had a brand-new body on for that run. That last one had over 120 runs so it was time to retire it. Usually, when you have a new body, things go wrong and it takes a few runs to have it settle in so really, hats off to my team, they’ve done an amazing job,” Hight said. “The forecast keeps changing, so we could see runs like that all weekend which will make it exciting for the fans. One down, four to go.”

“Not a bad way to start the weekend, third quickest, picked up some points for this PEAK Chevy team. Last race before the Countdown, sitting fifth, we’ll want to make a move if we can,” Force said. “Long weekend, a lot of chances to get it right and get ready for Monday. Going to just take it one step at a time, keep doing my job. My guys, Danny Hood and Tim Fabrisi, they’re giving me a good race car, just have to do my job.”

After calling out Mike Salinas as her opponent in the semifinals of the Pep Boys NRHA All-Star Callout running on Saturday, Brittany Force and the Monster Energy team had a rare bout with tire smoke during their first qualifying attempt Friday night. Force would have to shut off early to go only 4.739-seconds at 152.06 mph.

“Today kicked off the biggest race of our season here in Indianapolis for the U.S. Nationals. This event holds two races in one weekend with the Pep Boys All Star Callout. We had an autograph signing with the remaining All Star Call out players and then went on stage where our Monster Energy team called out Mike Salinas for the semis,” Force said. “There is no good team to pick, every competitor is a tough one but following the rules we made our pick. Unfortunately, in our first qualifying session we struggled to make a full pass and ran a 4.739. We will figure it out and turn this car around tomorrow.”

Austin Prock and the Montana Brand / RMT team ran into trouble mid-track having to shut off early for only a 5.363-second pass at 125.20 mph.

“Off to a tough start this weekend at the Big Go. Definitely had no intentions of smoking the tires Q1,” Prock said. “We were trying to be cautious and just make a nice clean A to B run and it came loose. We will regroup tonight and get this Montana Brand / Rocky Mountain Twist car in line.”

Competition at the prestigious U.S. Nationals continues with two qualifying runs Saturday at 2:45 and 6:30 p.m. and Sunday at 1 and 4:30 p.m. Eliminations are set to begin on Monday at 10 a.m. The Pep Boys NHRA All-Star Top Fuel Callout will be Saturday with the semifinals at 2:40 p.m. and finals at 6:25 p.m. The Pep Boys Funny Car Callout will be Sunday with first round at 1:20 p.m., semifinals at 2:45 p.m. and final round a 4:55 p.m. Television coverage of qualifying and the Callout will be on FOX Sports 1 (FS1) with shows Sunday at 1, 4 and 5:30 p.m. ET. Eliminations coverage will be split with a show at Noon ET on FS1 and the 2 p.m. ET on FOX Broadcasting Network.