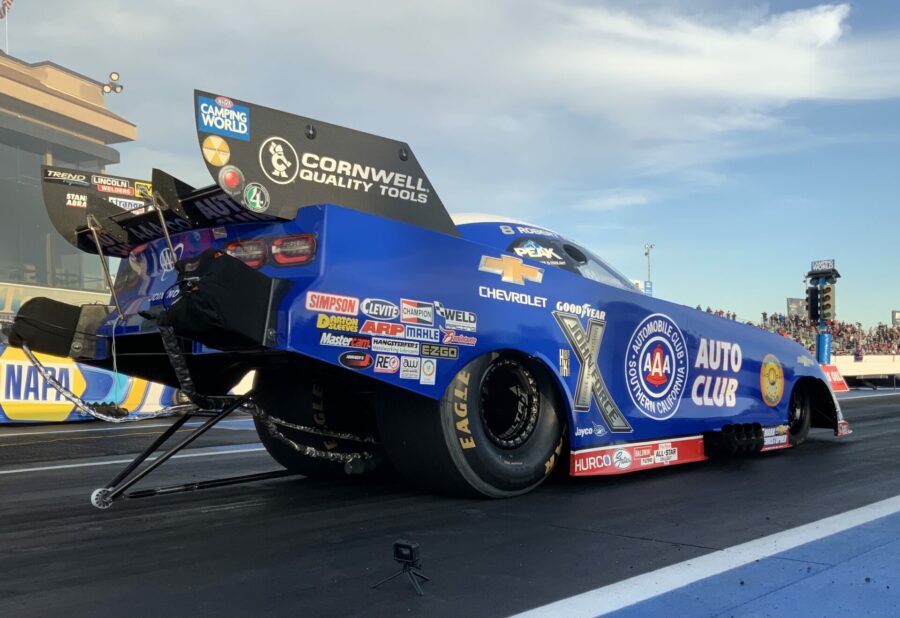 CHANDLER, Ariz. (Feb. 25, 2022) – Robert Hight and the Automobile Club of Southern California Chevrolet Camaro SS team find themselves in the low qualifier position once again Friday night at the NHRA Arizona Nationals at Wild Horse Pass Motorsports Park. John Force and the PEAK / BlueDEF PLATINUM Chevy picked things up to land in the No. 2 spot. In Top Fuel, Austin Prock and the Montana Brand / Rocky Mountain Twist dragster team are currently No. 4 while Brittany Force and the Flav-R-Pac / Monster Energy team are sitting No. 13.

Coming off a win and No. 2 qualifying position at the season opening Winternationals, Robert Hight and the Auto Club team didn’t skip a beat rocketing to a 3. 3.838-second pass at 332.18 mph, mimicking their efforts from one week prior when they ended Friday night in the No. 1 spot.

“It’s a good feeling to have this Auto Club team come out here and run like this. Just about every run we’ve made down the track this whole year has been in the 3.80s, so that’s pretty impressive, but we’re under really good conditions. You know when you come to Phoenix and the temperatures are like this, you better hold on,” Hight said. “Jimmy Prock and Chris Cunningham did a really good job and hit it just right. We had a really good run to come off of, the final round we ran 3.861 in Pomona, and we had just been here two weeks ago testing and we ran 3.86. We knew we were going to have to step it up but we also had the luxury, when you’re in the back of the pack, to be able to watch what the other cars are doing and plan ahead, and we did that.”

Looking to make a complete turnaround from their season opener results, John Force and the PEAK / BlueDEF Chevy laid down a stout 3.851-second pass at 332.02 mph as the second pair down the racetrack. Their pass would put a target on their back as the rest of the __ car field took their try. It would take teammate Robert Hight as the last pair to bump the 16-time champion.

“I’m alive. It was a good day. That’s better,” Force said. “Unless something crazy happens, we’re in the show. That’s all that matters. Let’s you breathe easier knowing you have two passes tomorrow that you can use to get ready for race day. This PEAK Chevrolet, it ran good, consistent, here at testing too so I’m feeling good.”

After finishing runner-up a week prior, Austin Prock and his Montana Brand / RMT dragster team ran into tire smoke but they weren’t alone. Their 5.886-second pass at 107.56 mph was still enough for the No. 4 position.

“Not the ideal start, especially coming off of last weekend, but we got thrown some really tough track conditions. It was getting cool, and the track was getting really tight really fast with the sun coming down,” Prock said. “We made it through the trouble areas where everyone else was throwing up, tried to send a bomb at it and the track wouldn’t take it. For not going down the track, this Montana Brand / Rocky Mountain Twist team is pretty happy because we know why. Tomorrow we’re going to go up there and do what we did in Pomona.”

Most of the 15-car Top Fuel field had issues with the cooling racetrack. That included track record holder Brittany Force and her Flav-R-Pac dragster team. It would be almost immediate smoke as they coasted to an 8.667-second pass a 78.28 mph to sit No. 13.

“Coming out of Pomona, we found some problems with this Flav-R-Pac / Monster Energy dragster that we think we’ve fixed coming into Arizona,” Force said. “Unfortunately, we struggled on that first run, a lot of people did. It was a great track, but we didn’t get the car down there. We get two more tomorrow and we’ll push and get it moved up.”

Qualifying at the NHRA Arizona Nationals at Wild Horse Pass Motorsports Park continues Saturday with runs at 1:30 and 4:30 p.m. Eliminations are slated for 11 a.m. on Sunday. Television coverage will be broadcast on FOX Sports 1 (FS1) beginning with qualifying shows Saturday at 11 a.m. and 7:30 p.m. ET. Eliminations will air at 7 p.m. ET on Sunday.