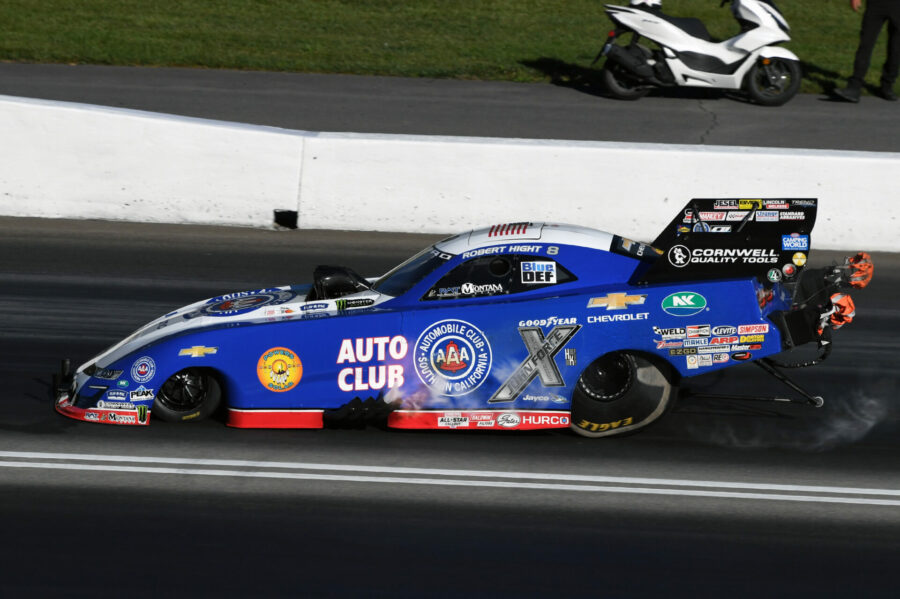 BRISTOL, Tenn. (June 18, 2022) – Robert Hight and the Automobile Club of Southern California Chevrolet Camaro SS Funny Car maintained their No. 1 qualifying position Saturday at the NHRA Thunder Valley Nationals at Bristol Dragway. John Force and the PEAK / BlueDEF PLATINUM Chevy improved to No. 3. In Top Fuel, Brittany Force landed the Flav-R-Pac dragster in the No. 5 position and Austin Prock put the Montana Brand / Rocky Mountain Twist dragster in No. 7.

“I’m still surprised that 3.97 held up. I definitely did not think that was going to be the top. We went up there this last run trying to run better than that. We haven’t had track temperatures like this in a while. So, we’re just missing it, everyone is. Going into race day, I still don’t think we have a good handle on this Auto Club Chevy because in drag racing, you’re only as good as your last run. Luckily, we get a bye first round,” Hight said. “I have a really good feeling if we can make four 3-second runs tomorrow, this Auto Club team will be holding the trophy at the end of the day.”

John Force and the PEAK / BlueDEF Camaro turned things around in the second qualifying session laying down a 4.032-second pass at 314.68 mph to earn three bonus qualifying points for being quickest of the session and jumped them up to the No. 2 spot. Force would continue to move in the right direction closing out qualifying with a 3.997-second pass at 321.96 mph, the second quickest of the session, to ultimately land in the No. 3 spot and earn another two bonus points.

“Pretty good day today for this PEAK Chevy team. We improved, gained some consistency, it looks good, it feel good,” said Force who will run against. “I’m looking forward to tomorrow, running on Father’s Day with my daughter, Brittany. All of us are up there, in the show, so we’ll see what happens. The fans are really showing out so I’m excited to get going in front of a packed house.”

The Flav-R-Pac dragster started to smoke the tires during the second qualifying session on Saturday afternoon. Brittany Force would have to shut off around mid-track to go only 4.405-seconds at 181.18 mph at the finish line. Force and her David Grubnic and Mac Savage tuned Flav-R-Pac dragster would make improvements in their final qualifying try laying down a solid 3.807 at 325.69 and pick up the No. 5 position to race Doug Kalitta first round.

“Our Flav-R-Pac team stepped it up today to move up to the number five position,” Force said. “That 3.80 run moved us up, kept us top five which is what we always aim for. We face Doug Kalitta tomorrow and we hope to go all four rounds and have a long race day on Father’s Day.”

Austin Prock and the Montana Brand / RMT team dropped cylinders in their first go on Saturday afternoon but improved with a pass of 3.865-seconds and 313.29 mph that moved them from No. 14 to No. 7. In the final qualifying session, the 2019 Rookie of the Year once again made a jump in performance with a 3.835-second pass at 325.69 mph to maintain his No. 7 qualifying position and put him against Leah Pruett in the first round of eliminations.

“Solid Saturday for my Montana Brand / Rocky Mountain Twist team. We made two good runs in the heat to set us up for Sunday,” Prock said. “I’m looking forward to racing on Father’s Day tomorrow and hoping to get my dad the ultimate gift.”

Eliminations at the NHRA Thunder Valley Nationals at Bristol Dragway will begin Father’s Day Sunday at noon. Television coverage eliminations will be on FOX Broadcasting Network Sunday at 3 p.m. ET.