ROBERT HIGHT AND AAA TAKE POINTS LEAD WITH WIN NO. 4 OF THE SEASON IN OHIO 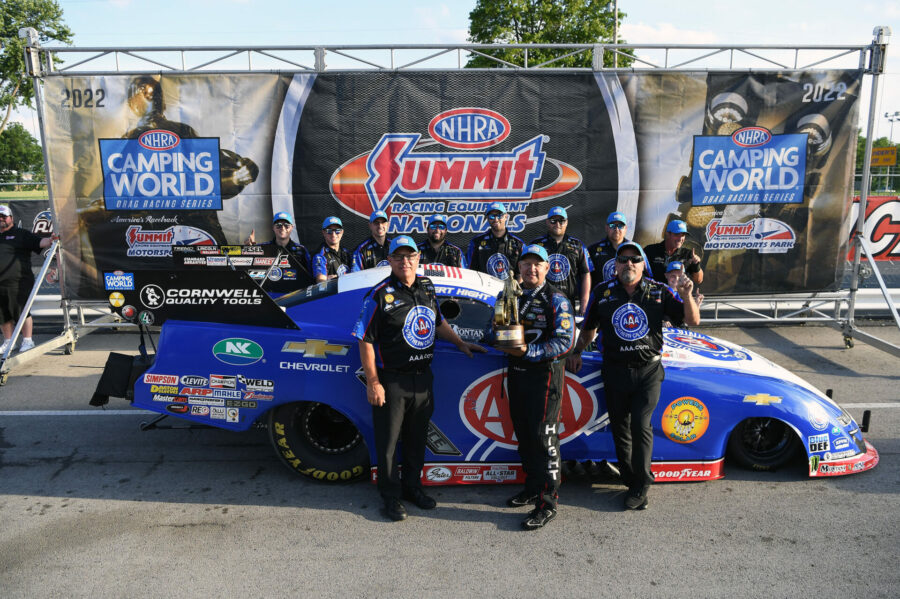 Coming in as the No. 3 qualifier making his 90th career final round appearance, Robert Hight defeated Bob Tasca III for his 57th career victory, first at Summit Motorsports Park. The AAA Ohio Chevy would rally to a 3.944-second pass at 327.51 mph for Hight’s fourth win of the season bettering Tasca’s 3.962 at 330.63.

“This is big. I’ve never won here. We come here almost every year and race in Night Under Fire, a huge match race where the Badder’s pack in all the fans. I’ve won that thing a lot, but I could never get it done here for the National event,” said Hight who has been to six of 10 final rounds this season. “I think this is awesome being able to cross this one off and get the points lead, it’s big. I am so proud of this AAA team. They have worked so hard. AAA Ohio and everybody behind us, Chevrolet, Cornwell Tools was here with us. I’ve had so much fun this weekend and we’ve had a great time, and I’m not ready for it to end.”

Hight and the AAA Chevy now have a 21-points lead over Matt Hagan in the NHRA Camping World Drag Racing Series points standings.

In the semifinals Force would lineup with class rival Josh Hart. Hart would run the second quickest pass of race day at 3.750-seconds at 328.94 mph and the Monster Energy dragster would come up shot with a 3.783 pass at 329.02 mph.

“Overall, our Monster Energy team had a good weekend at Summit Motorsports Park in Norwalk, Ohio. We earned our third No.1 qualifier of the season, set both ends of the track record with a 3.666 at 333 mph run, and made a semi-final round appearance on raceday,” Force said. “We have a couple weeks off to reset and get ready for the Western Swing. We kick it off starting in Denver and then head to Sonoma and Seattle. We plan to keep the rhythm we’ve held all year and get back in another winners circle.”

John Force and the PEAK Chevy continued to improve on their performance from qualifying in the first round of eliminations. The BlueDEF Camaro would lay down the best run of the event at 3.878-seconds and 333.41 mph while his competitor Bobby Bode ran a 4.121 at 244. 96. In the second round, Force’s Chevy Camaro Funny Car would put a hole out at the step hindering the BlueDEF car to run only 4.154 seconds at 271.52 mph falling short to J.R. Todd’s 3.953 at 329.34.

“Not a bad weekend for this PEAK Chevrolet team. We picked up quite a few qualifying points and we were strong through qualifying, even today, race day, we looked good,” Force said. “We dropped a cylinder out there, not sure why, but we’ll get it figured out and move onto the Western Swing. Good weekend for Robert and AAA over there getting the win and Brittany with Monster and Flav-R-Pac going No. 1. The Prock kid, they are pulling it together, he’s hard on himself so he’ll work at it and that Montana Brand team will be good.”

Austin Prock and the Montana Brand / RMT dragster started race day with a solo run after Clay Millican broke on the starting line. Prock would handle the Joe Barlam and Rahn Tobler tuned dragster to a 3.836-second run at 256.65 mph after shutting off early. In the second round, Prock would face eventual runner-up Josh Hart. Hart would win on the starting line with a .038-second reaction time to Prock’s .063. Hart would cross the line at 3.813-seconds and 323.66 mph to get the holeshot win over Prock’s 3.808 at 321.81.

“We made good progress today on our Montana Brand / Rocky Mountain Twist car and I messed it up. I was .063 on the tree and got picked off,” Prock said. “Definitely pissed for my guys. They’re doing a great job and we just can’t seem to get it done. I’ll go to work to try and improve to make sure this doesn’t happen again. Looking forward to the Western Swing here in a few weeks.”