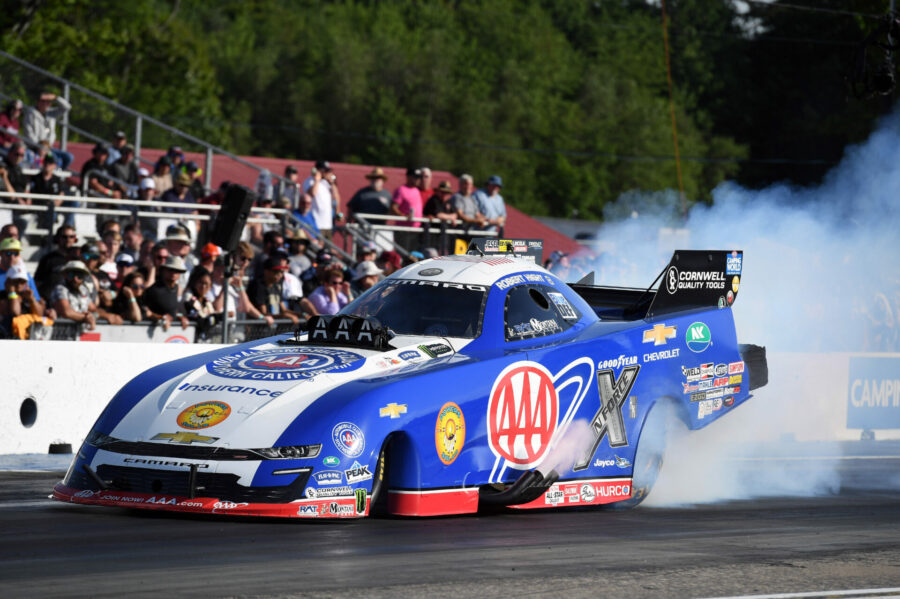 EPPING, N.H. (June 05, 2022) – Robert Hight and the AAA Northern New England Chevrolet Camaro SS Funny Car raced to their fifth final round of the season and their second consecutive runner-up at the NHRA New England Nationals at New England Dragway on Sunday. Austin Prock and the Montana Brand Rocky Mountain Twist dragster were semifinal finishers while Brittany Force with Monster Energy and John Force in his PEAK / BlueDEF PLATINUME Chevy had quarterfinal exits.

After making a dramatic improvement in the final session of qualifying to start race day from No. 3, Robert Hight had to do some work to get the AAA New England Chevy to the finish line in round one. The three-time champion pedaled his way to a 4.328-second pass at 280.49 mph getting by Cory Lee’s 4.523 at 250.32.

Lined-up in a monster match-up with two-time reigning Funny Car champion Ron Capps who had just defeated John Force Racing boss John Force en route to the semis, Hight would stay consistent running a clean 3.927-seconds at 327.19 mph while Capps would put a hole out to run only 4.092 at 281.66.

The round win streak for Hight would come to an end against points leader Matt Hagan in the final round. The AAA New England Chevy would be up in smoke near 300-feet. Hight would try to pedal his Camaro to the line but couldn’t regain traction to run only 6.232-second at 110.15 mph while Hagan had a clean pass of 3.922-seconds at 327.98 mph.

“Tough way to end the day. You know this AAA Chevy got a little lucky in the first round had to pedal it and was able to pull it off but then we really stepped it up and were running well. We just couldn’t get the job done in the final,” Hight said. “It’s another final round though, and it’s points on the board. We just have to keep it up. Keep running well, pick ourselves up if we stumble and that’s what this team does, they don’t give up. We’ll just head to the next one and look to get the job done in Bristol.”

Austin Prock and the Montana Brand dragster had the first round victory over Antron Brown’s 3.875-second pass at 312.42 mph but a technical issue would record no time or speed for his winning run. The win set Prock up to run teammate Brittany Force in the quarterfinals.

Coming in as the No. 2 qualifiers, Force and the Monster Energy team carried over their qualifying performance going 3.702-seconds at a track speed record 334.90 mph, bettering her qualifying speed record of 334.32 mph, to defeat Clay Millican who’s dragster went up at smoke early to coast to a 10.057 at 80.52.

“It was a tough weekend for our Monster Energy team. We made some good runs, but we got beat in round two over a hole shot,” Force said. “We’ll pack up and head to the next one. Still in the points lead and we still have great confidence for the rest of the season.”

In the semifinals, the Montana Brand dragster would line up with Mike Salinas. Prock would once again have the starting line advantage, but his Chevy dragster would start to lose traction slowing him to a 5.530-second pass at 126.01 mph allowing Salinas to go round him for a winning 3.865 run at 289.63 mph.

“Another good showing on Sunday for this Montana Brand / Rocky Mountain Twist team. Really proud of my guys after this weekend. We were not easy on them in qualifying and they kept a good attitude and their heads down to prepare the car each round,” Prock said. “We made some solid passes as a team today and know our time is coming. We’re looking forward to the rest of the season.”

“Well, we ended up qualifying pretty well and we got a couple win lights. Not a bad weekend for this PEAK Chevy, not great, but not bad,” Force said. “Everyone did pretty well, Brittany with Monster and Prock having to race against each other. Prock making it to the semis with Montana Brand. And the Robert over there with AAA getting to another final, they’re keeping up the fight. And we’re still in it. Sitting fourth in points, you know, we’ll be okay.”