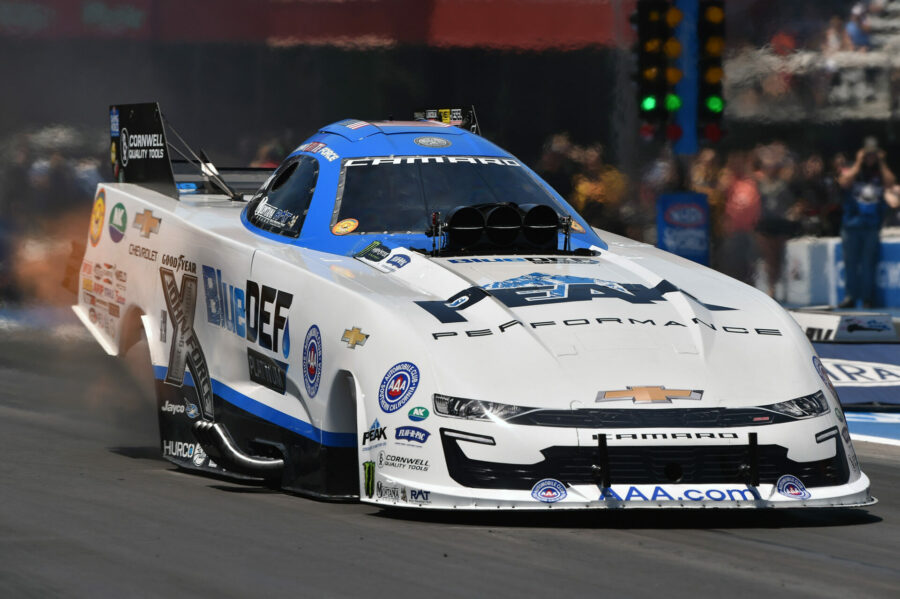 There was tire smoke on either side of the track during John Force’s first round match up with Terry Haddock. Haddock would go up in smoke early while Force’s PEAK / BlueDEF Chevy lose a cylinder at mid-track before shutting it off. Force would come out on top with a 4.138-second pass at 265.38 mph to Haddock’s 6.760 at 102.48.

In the second round, the sixteen-time champion defeated long-time rival Cruz Pedregon. Force would lead off the line while both hot rods would drop cylinders. Force would cross the line at 4.031-seconds and 310.45 mph to better Pedregon’s 4.177 at 289.88.

Force and fellow veteran Tim Wilkerson would meet in the semifinals. Force would have the starting line advantage and stay in front until the PEAK Chevy runs into tire smoke for only a 4.395-second pass at 263.41 mph. Wilkerson would come out with the win at 4.135 at 306.67.

“Not a bad weekend, keeping ourselves in the hunt. This PEAK Chevy went a couple rounds, the guys worked hard, we improved through qualifying, that’s all you can ask for,” Force said. “We’ll take a couple days and then turn right around and head to Norwalk and look to get the job done.

As the No. 1 qualifiers, Robert Hight and the Auto Club Chevy earned themselves a bye in the first round of competition where they ran 4.085-seconds at 268.65 mph, the second quickest of the session. Hight would move onto face reigning world champion Ron Capps in the second round.

Off the line, Capps would have the advantage, but Hight would drive around him before the 60-foot mark. The Auto Club Chevy would enjoy the lead for only moment, driving into smoke before mid-track. Hight would run 5.526-seconds at 194.74 mph to be defeated by Capps’ 4.031 at 319.45.

“Obviously not the way we wanted today to go. There was more out there for this Auto Club Chevy, but we’ll be okay. We figured things out from qualifying, the track was tricky, conditions were tough,” Hight said. “I’m just glad we don’t get a break; we get to head right to Norwalk, Ohio where conditions will be similar and we’ll be able to get back to where we need to be.”

Brittany Force and the Flav-R-Pac Chevy dragster team would chase down Doug Kalitta in the first round of eliminations. Kalitta would be up in smoke for a 4.065 at 282.60 mph allowing Force to drive around him. The Flav-R-Pac dragster would drop a cylinder at the finish but record a 3.844-second pass at 312.42 mph to earn lane choice over Antron Brown in the second round.

“It was a tough weekend here at Thunder Valley for this Flav-R-Pac / Monster Energy team. We got eliminated in round two but, luckily we kept the points lead,” Force said. “We have a quick turnaround and get to head to Norwalk next weekend. We’ll look to make up some points and pick things back up, get our momentum back.”

Coming out of a successful second day of qualifying, Austin Prock and the Montana Brand / RMT Chevy dragster team would have the starting line advantage in round one before hazing the tires around the 300-ft mark. Prock would attempt to pedal his way to the win but couldn’t catch Leah Pruett. Prock would go 4.107-seconds at 298.27 mph falling short to Pruett’s 3.835 at 324.36.

“Not the performance we needed today, but it was another good weekend of logging data. This Montana Brand team made gains in the heat all weekend,” Prock said. “On a positive note of exiting round one, I was happy with the recovery of the car to get it down the track. I have been working on getting better in that area as a driver and I think it showed today. One of these days that could win us a round. Glad we only have a few days to stew on the loss before getting to Norwalk.”