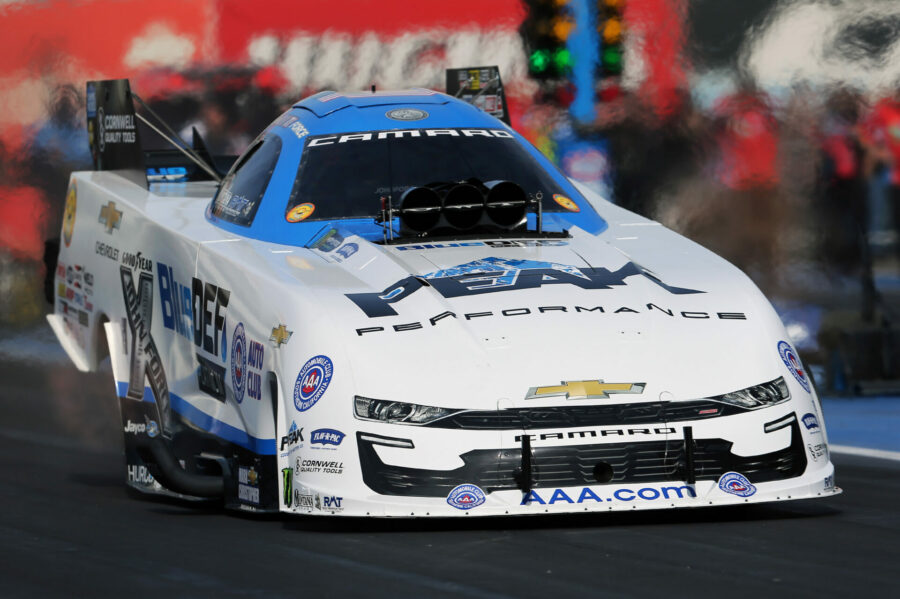 LAS VEGAS (March 30, 2022) – Heading into the NHRA Four-Wide Nationals at The Strip at Las Vegas Motor Speedway, the fourth event of the NHRA Camping World Drag Racing Series season, having broken into the top 10 of the points standings, John Force and his PEAK / BlueDEF PLATINUM Chevrolet Camaro SS team are ready to make-up more ground at the first of two four-wide events on the 2022 tour.

Force had pre-season success at testing at Wild Horse pass Motorsports Park in Arizona but stumbled at the season opening Winternationals. The PEAK / BlueDEF team turned things around back at Wild Horse Pass Motorsports Park for the NHRA Arizona Nationals. They would qualify No. 3 and have a semifinals appearance. At a rain-soaked and abnormally cold NHRA Gatornationals, Force and the BlueDEF team would have a quarterfinal finish that, along with some surprising early exits, would jump them into fifth in the points standings.

“It’s been a bit of a wild start to the season. But you, know, this BlueDEF team with Danny Hood and Tim Fabrisi, they’ve got a handle on this Chevrolet. We’ll fix it. That’s what it’s all about,” said Force. “We’ve got to get these cars making some noise and winning some rounds, and we will.”

Since the debut of four-wide racing at Charlotte in 2010, no one has won more quads than Force; he has been first to the finish in 12, more than any other Funny Car driver.  He also has two overall four-wide race wins. Only Steve Torrence in Top Fuel and Andrew Hines in Pro Stock Motorcycle have more. No one has won more Funny Car races at The Strip at Las Vegas Motor Speedway, four times in the fall race (2002, 2010, 2013 and 2016) and twice in the spring before it transitioned to four-wide (2010, 2015). Force was also the No. 1 qualifier at the spring race in 2002 and 2011 and at the fall race when he won in 2013.

“Couldn’t get a better place to go four-wide racing. Bruton Smith and his son Marcus, they’ve really created a great show, first at Charlotte and then now at The Strip at Las Vegas,” Force said. “I’m looking forward to seeing the stands packed and getting back into my PEAK Chevy hot rod after these two weeks off. Ready to have some fun and win some rounds for all my sponsors.”

Qualifying at the NHRA Four-Wide NHRA Nationals takes place Friday and Saturday with two sessions at 1 p.m. and 3:30 p.m. (PT) on each day. Eliminations are slated to begin at noon on Sunday. Racing action will be televised on FOX Sports 1 (FS1) and begins with qualifying Friday at 7 p.m. ET and continues Sunday at 12:30 p.m. ET. Eliminations will air Sunday at 7 p.m. ET.