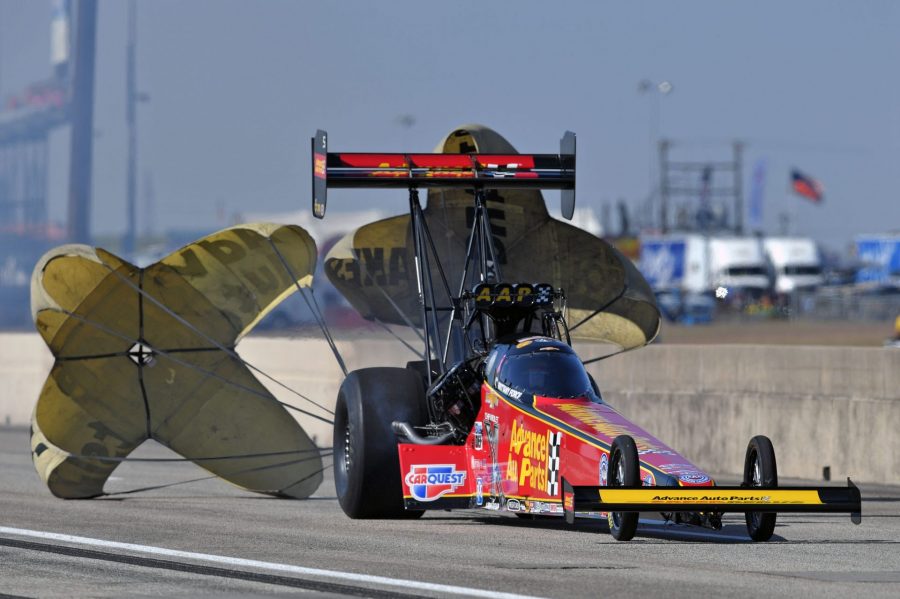 ENNIS, TEXAS (Oct. 20, 2019) — The quad of John Force Racing nitro breathing hot rods stampeded their way to semifinal appearances at the AAA Texas NHRA FallNationals at Texas Motorplex outside of Dallas. Robert Hight and the AAA Texas Chevrolet Camaro extended their points lead to 70 while John Force and the PEAK Coolant and Motor Oil / BlueDEF Camaro sit only four points back from second. In Top Fuel, Brittany Force put the Advance Auto Parts team within 46 points of the lead and Austin Prock did some damage to move into sixth.

After a blistering 3.651-second pass at 331.28 mph Friday night took Brittany Force to the No. 1 spot, she opened race day with a first-round victory over Cameron Ferre. The pilot of the Advance Auto Parts machine blasted past Ferre to light the scoreboard with a stellar 3.694-second pass at 330.31 mph defeating Ferre’s 3.984 at 269.19. In the quarterfinal, Force competed against longtime rival and three-time world champion Antron Brown where she made a 3.815-second pass at 319.60 mph upsetting Brown’s 4.113 at 230.72 after he smoked the tires. Facing eventual winner Billy Torrence in the semifinal, Force dropped a cylinder to run 3.793-seconds at 318.32 mph giving Torrence and his 3.747 at 328.38 a trip to the finals.

“Going into first round, this Advance Auto Parts team made some big moves especially when points leader Steve Torrence got taken out and No. 2, Doug Kalitta, got beat by my teammate Austin Prock. That opened the doors for this Advance team to pick up some points and catch up and that’s exactly what we did,” said Force whose only 13 points shy of Kalitta. “We made it to the semis and would have obviously liked to have gone all the way but I’m not looking down on it. I’m staying positive and we’re still in the hunt for this championship.”

Austin Prock and the Montana Brand / Rocky Mountain Twist Top Fuel team rocketed to a 3.688-second pass at 334.40 mph in the first round of eliminations to take the win light over points leader Doug Kalitta. The pass marked his career best elapsed time, set the track speed record and matched him up with Leah Pritchett in the next round. With lane choice over Pritchett in the quarterfinal, Prock ran his dragster to the finish line with a 3.742-second pass at 330.39 mph bettering Pritchett’s 3.964 at 250.55.

Entering the semifinals for the fifth time of the season, Prock faced fellow rookie Jordan Vandergriff. In what was a close side-by-side race, only four thousandths apart, the third-generation racer would fall short of the final round after making a 3.864-second pass at 294.95 mph to Vandergriff’s 3.824 at 316.97.

“This Montana Brand / Rocky Mountain Twist team had a solid outing today. My guys gave me an excellent car. We were low of round one and two, got the speed track record, ran a career best ET, and just barely missed it in the semis,” said Prock who jumped into sixth in the Countdown to the Championship. “We were out front and it got loose on us before the 1/8 mile but we have good momentum going into Vegas. I think we’ll be the car to beat.”

Robert Hight and the AAA Texas Chevy Camaro SS team launched their way past Jim Campbell in the opening round. Hight, who had the starting line advantage and never trailed, handled his Chevy Camaro SS to 3.908-seconds at 327.03 mph sending Campbell and his 4.375 at 219.54 home early. The first-round win set him up with Shawn Langdon for a quarterfinal showdown. Hight would once again have the starting line advantage and accelerate to a 3.937-second pass at 326.40 mph beating Langdon’s 3.964 at 321.35.

Going to the semis where he faced eventual race winner Matt Hagan, Hight was off the tree too early for a foul start of -0.199 seconds giving Hagan the win light. Hight leaves Texas Motorplex with a hold on the No. 1 spot in the Countdown.

“That’s never how you want to end a race day. That was driver error. We had a great car today; the AAA Texas Chevy Camaro was going to be tough to beat. Jimmy Prock and Chris Cunningham, they had the right combination to get us another win, carry over our momentum and our set up from Charlotte and I didn’t do my job on the line. I know it happens, sometimes it’s the tune-up, sometimes it’s the driver. Unfortunately, today, it was the latter,” Hight said. “The most important thing to focus on is that we are coming away from the weekend with an even bigger points lead than when we entered and with how competitive the field is, that’s a big deal. I’ve said it before, but I really believe this championship is going to come down to the last race of the season, the Auto Club Finals, and it could even be the last day, the last pass of the year that determines this year’s title.”

With lane choice over Bob Tasca III in the semifinals, Force kept his performance consistent making a 3.951-second pass at 327.98 mph but it wasn’t enough to head to the final round after Tasca III crossed the finish line with a 3.920 at 323.89. Despite the exit, Force remained third in the points standings.

“We had four cars in the semis today so that’s good for John Force Racing. Robert didn’t get hurt and nobody moved on him, I couldn’t even move up but a couple are coming up from the bottom so we have to stay focused and I’m only a couple points out of second,” said Force. “Robert has a sizeable lead; Brittany is just outside of second and the Prock kid moved up so we’ll see how it goes at this next one.”

The NHRA Mello Yello Countdown to the Championship continues with the fifth of six races, the Dodge NHRA Nationals Presented By Pennzoil at The Strip at Las Vegas Motor Speedway in Las Vegas, Nevada, Nov. 1-3.