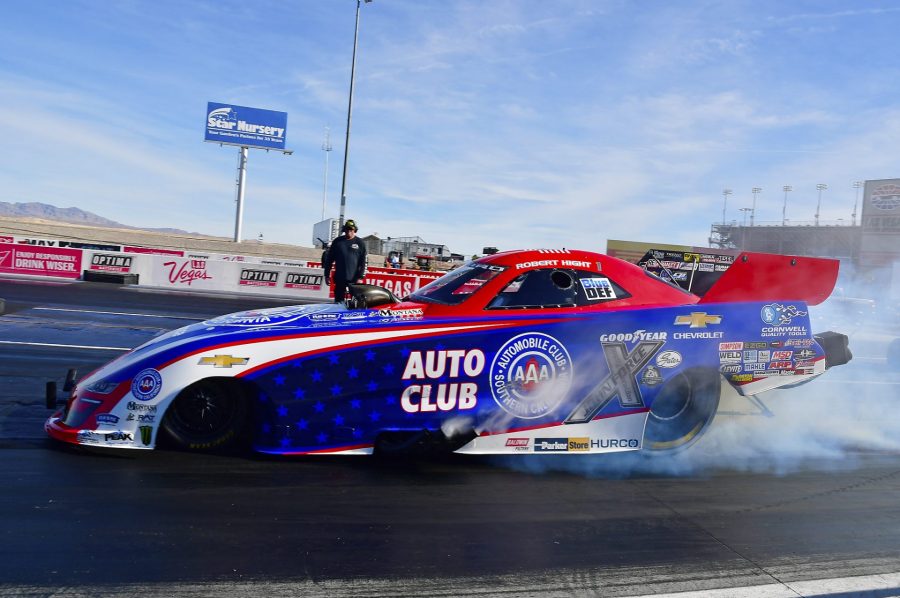 LAS VEGAS (Feb. 01, 2020) — The four hot rods of John Force Racing had a successful three-day test session at The Strip at Las Vegas Motor Speedway thanks to their hard work during the off season and some carried over momentum from 2019.

Three-time and reigning Funny Car world champion Robert Hight and the Auto Club of Southern California Chevy Camaro SS team left no doubt that they will continue to be the team to beat this season as they laid down several impressive passes including a 3.839-seocnd run at 334.40 mph on Friday that maintained as the quickest of the Nevada test session.

“I’m very confident heading into Pomona,” said Hight, who opened last season with a victory at the NHRA Winternationals hosted at Auto Club Raceway at Pomona in Pomona, Calif. “We were quickest both Thursday and Friday and ran well. It’s a lot like last season, we had a great test session then went to Pomona and were low qualifier and went onto win the race. We are the same team we were last year, same work ethic, same drive to win and we’re looking to go out and do what we did last year. Win races, get the little points, be consistent and win another championship.”

Austin Prock and the Montana Brand / Rocky Mountain Twist team, headed by Mike Green and new comer to John Force Racing Joe Barlam, showed some serious promise when they laid down a 3.682-second pass on Friday. The run, which clocked in at 333.08 mph, is an unofficial career best for the 2019 Auto Club Road to the Future Award winner.

Team namesake John Force, who will continue his chase for a 17th world championship into the 2020 season, seemed to have the most consistency through the test session. With son-in-law Danny Hood at the helm and Ronnie Thompson and Tim Fabrisi alongside him, Force, the winningest driver in NHRA history, had a slew of passes in the 3.8-second range over all three days but none better than his 3.854-second pass at 334.40 mph from Friday.

“Testing was great. I ran right there with Robert, he was quickest. Austin over there with his new looking Montana Brand dragster ran the quickest he’s ever run. Brittany looked solid. Overall a great couple of days,” Force said. “I’m excited it’s all come together, all our sponsors, getting Monster back and having Flav-R-Pac on board. It’s just really good to be back racing, to be back at a race track and to be making good runs. Really want to thank The Strip at Las Vegas Motor Speedway for hosting us and for the hard work everyone put in to make these couple of days successful.”

Crew chief duo David Grubnic and Mac Savage put the emphasis of their test days with Brittany Force on the early section of the run. With new parts from John Force Racing needing to have their legs stretched, the team, who split their session between their Monster Energy and Flav-R-Pac schemes, made a series of early shut-off runs, including a 3.86-second pass at 328 mph, that left Grubnic and Savage feeling good going into Pomona next weekend.