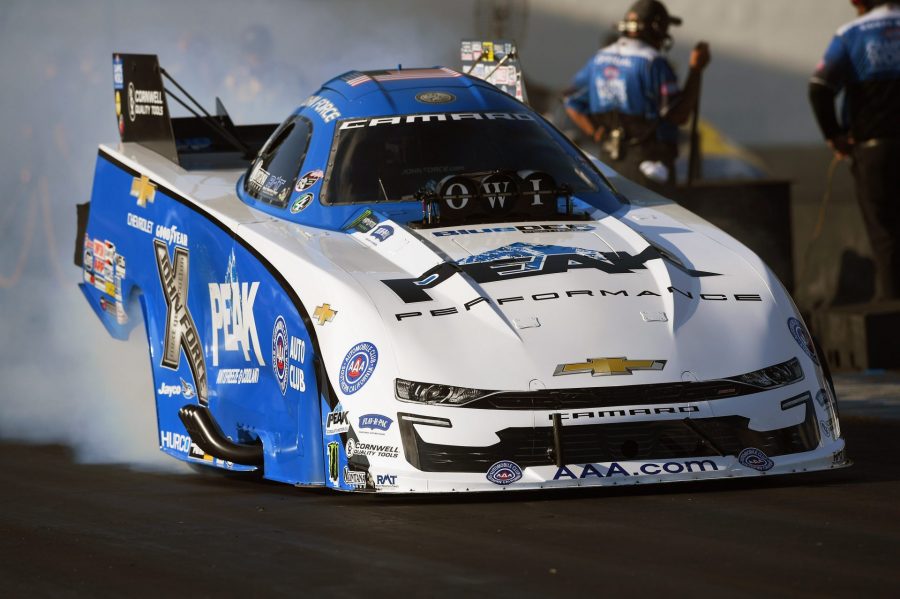 READING, Pa. (Sept. 12, 2021) – John Force and the PEAK Antifreeze and Coolant Chevrolet Camaro SS Funny Car made their 260th final round appearance Sunday at the Mopar Express Lane NHRA Nationals at Maple Grove Raceway and come away from the weekend with the NHRA Camping World Drag Racing Series points lead. Brittany Force and the Flav-R-Pac team as well as Robert Hight and the Automobile Club of Southern California Camaro team had semifinal finishes.

The second-round victory would line the 16-time champion up against three-time champion and president of John Force Racing, Robert Hight. It would be a close drag race with both drivers going 3.909-seconds. Force’s reaction time of .054 would give him the win, the points lead and set the stage for a final round against Tommy Johnson Jr.. Filling in for Matt Hagan, Johnson Jr. would go 3.926-seconds at 330.23 mph to better Force’s 3.946 at 328.54.

“Well we got the points lead. That’s important,” Force said. “Danny Hood and Tim Fabrisi, they figured this PEAK Chevy out and really gave me a heck of a car today. The whole PEAK team, they worked hard, put things together and all I had to do was drive the car. It was fun today, the crowd, Maple Grove Raceway up here in Pennsylvania, great way to start the Countdown. Now we get to do it all over again next weekend.”

Brittany Force and her David Grubnic and Mac Savage led Flav-R-Pac team opened race day with a bye run thanks to their No. 1 qualifying position and a 13-car field. The track speed and E.T. record holders took full advantage of the pass going 3.655-seconds at 333.49 mph to give them lane choice in the second round. Force would make a 3.704 second run at 334.48 mph to defeat Leah Pruett’s 4.025 at 227.23 after she ran into trouble in the quarterfinals. The win lined her up with eventual race winner Billy Torrence in the semifinals. The Flav-R-Pac dragster would put a cylinder out down track for Force’s 3.777 at 318.84 to come up short to Torrence’s 3.725 at 328.46.

“The first race of the Countdown is behind us and our Flav-R-Pac / Monster Energy team is in a better position than we were coming into this race,” Force said. “We picked up bonus points and made a semi-final round appearance. We kept our number two position and plan to step it up in Charlotte.”

“It’s tough out there in Funny Car. I knew it was going to be. This Countdown is going to be a fight to the end,” Hight said. “Not a bad weekend for this Auto Club Chevy team. We gained some points, went some rounds and made some consistent runs. That’s we need. To be consistent, to be aggressive and make good runs. Luckily we get a chance to keep up the momentum right away with the race in Charlotte next weekend.”

The NHRA Camping World Drag Racing Series Countdown to the Championship continues Sept. 17-19 with the DeWalt NHRA Carolina Nationals at zMAX Dragway just outside of Charlotte in Concord, N.C.