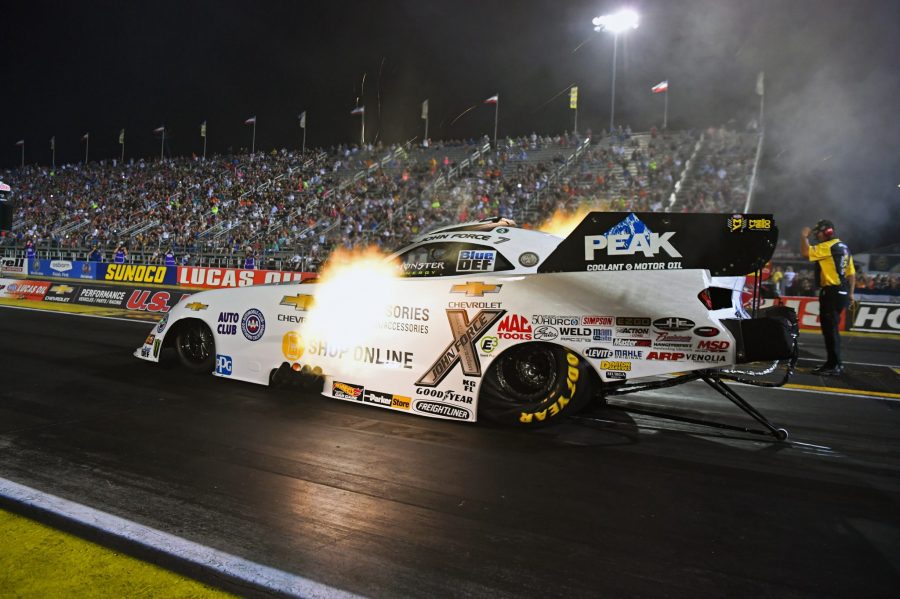 BROWNSBURG, Ind. (August 31, 2018) — Sixteen-time world champion John Force and the Chevrolet Accessories PEAK Camaro SS ran a 4.003-second pass at 320.89 mph to be in the No. 7 spot after one of the five qualifying passes for the Chevrolet Performance U.S. Nationals. Sitting eighth in the points after a regular season that’s had it’s fair share of low points, Force is staying focused one run at a time.

“I feel good just getting that first run out of the way and going A to B. That run will allow the crew chiefs to get aggressive the next two days. The conditions will be different tomorrow but we will be ready for that. Right now we are taking any negative you can think of and we are turning it into a positive,” Force explained. “We had a great test session last week and so I feel positive about the next two days of qualifying. My other Funny Cars are right on their game and we can all run in the heat. We are going to be okay and I am ready to get to the next session.”

Courtney Force made quick work of her first assignment of the Labor Day weekend Friday when she drove her Advance Auto Parts Chevrolet Camaro SS Funny Car down the 1,000-foot course at Lucas Oil Raceway at Indianapolis in 4.330 seconds at a finish line speed of 214.83 mph during the first day of qualifying for the 64th annual Chevrolet Performance U.S. Nationals.

By simply putting a time on the board, the second-generation pro secured the regular season championship for Advance Auto Parts, Chevrolet and John Force Racing and earned the coveted No. 1 starting position for the six-race Mello Yello Countdown to the Championship that begins Sept. 16 in Reading, Pa.

“This is an incredible feeling for our Advance Auto Parts Funny Car team. I am so proud of my guys and (crew chiefs) Brian Corradi and Dan Hood. The job that they have done to get us this far is great,” said Force, who will continue with qualifying at the U.S. Nationals from eleventh. “To be in the No. 1 spot for the Countdown and really take the pressure off for the rest of the weekend is huge. We don’t have to worry about locking into the Countdown and, even better, we don’t have to worry about what position we will be in heading to Reading for the first race of the playoffs. It is amazing to come to the Chevrolet Performance U.S. Nationals knowing we have locked into the top spot and now our focus can entirely shift to going after the win on Monday.”

Reigning Funny Car world champion Robert Hight and his Auto Club of Southern California Chevrolet Camaro SS landed themselves temporarily in the No. 9 spot after a 4.010-second pass at 301.27 mph under the Friday night lights. Currently third by a handful of points, Hight will be hoping to lock into the Countdown to the Championship at No. 2 by the end of the weekend.

“We were trying to run a lot quicker that session and it just didn’t go. It started pulling me to the centerline so I had to lift,” Hight said. “We can run quicker tomorrow. This Auto Club team is looking to get that No. 2 spot for the Countdown and win this race. We have four more shots to get good runs and we will be looking to get the best runs possible.”

In Top Fuel, Brittany Force, racing the PEAK Coolant and Motor Oil dragster for Labor Day weekend, is in the No. 11 spot off the efforts of her 4.393-second pass at 179.85 mph. Force is looking to move up in the Mello Yello points standings with a good showing at the prestigious U.S. Nationals. After winning the championship from the No. 6 spot, she’s know that getting in the playoffs is all she needs to do to go after a second championship.

“I have been anxious to get here and get the race started. We are eighth in the points and we are battling to stay in the Top Ten. We can move up in the standings as well so that is what we are focusing on. I just wanted to get here and get things rolling. I have a great team behind me and we are excited to be running the PEAK colors this weekend. Brian Husen and Alan Johnson are incredible and they will do what needs to be done this weekend. Our ultimate goal is to go out here and win this race.”

Qualifying at the 64th annual Chevrolet Performance U.S. Nationals continues with two sessions Saturday at 2 and 5 p.m. and an additional two sessions Sunday at 12:45 and 4:30 p.m.