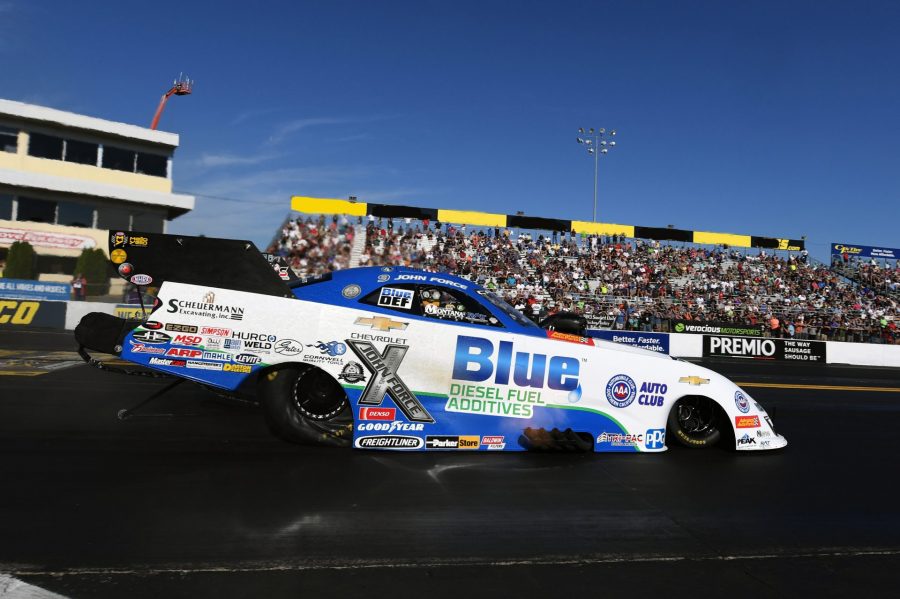 READING, Pa. (Sept. 15 2019) — Sixteen-time Funny Car world champion John Force raced his PEAK Coolant and Motor Oil / Blue Diesel Fuel Additives Chevy Camaro SS to their fourth final round of the season Sunday at the Mopar Express Lane NHRA Nationals presented by Pennzoil. Force, who has won the event hosted at Maple Grove Raceway just outside of Philadelphia seven times, muscled his way to be within 19 points of the Funny Car points lead with just five races left in the NHRA Mello Yello Countdown to the Championship.

Funny Car Teammate Robert Hight took the Automobile Club of Southern California Chevy Camaro SS to the quarterfinals and remains in the top three of the points standings, it is the first time in 19 races, all season long, that Hight has not left a race with the points lead. In Top Fuel, Austin Prock with Montana Brand / Rocky Mountain Twist and Brittany Force with Advance Auto Parts had semifinal finishes, moving them each up in the points standings.

Facing his most raced against opponent, John Force powered his PEAK Coolant and Motor Oil / Blue Diesel Fuel Additives Camaro to a 3.938-second pass at 326.40 mph to defeat his first-round matchup, Cruz Pedregon, for the 73rd time. Pedregon got out of the groove to finish with a 4.725 at 172.94.

Racing in his fourth final round of the season, 254th of his career, Force would narrowly fall on a holeshot to Jack Beckman. The final was a rematch of the U.S. Nationals finals where Force won his 151st victory. Sunday in Reading, Penn., wouldn’t go in the legendary driver’s favor. Beckman’s 3.958-second pass at 330.07 mph combined with his .028-second reaction time would defeat Force’s .068 reaction time and 3.952 pass at 328.78 mph.

“Good day; got to the final. Beckman with a .028 light. I can’t beat that on my best day. But my PEAK car has been very consistent and these kids give me a lot of heart and a great race car that’s fast. We’re not in the lead, but we have two cars – Robert and myself – and I’ve got two other cars with Brittany and Prock that are starting to hurt some feelings out there,” said Force. “Brittany leaving here with the national record and Prock really knows how to pedal. He’s learning all this like Brittany did, and he’s learning it fast. And you can’t say anything about Robert; he’s already the best.”

It was a battle of the rookies in round one of race day as Austin Prock lined up with Jordan Vandergriff. Prock would improve to 2-0 over his rival as he handled his Montana Brand / Rocky Mountain Twist dragster to 3.698-seconds and 331.61 mph. Vandergriff would run 3.757 at 322.34.

The excitement would continue for the first-year racer as he pedaled his way to a second-round win over Leah Pritchett. Both dragsters would go up in smoke with Prock on and off the throttle all the way down the track for a 4.735-second win at 219.51 mph. Pritchett would knock her blower and parachutes loose before recording a 5.736-second run at 105.48 mph.

Prock’s run for the Wally at Maple Grove Raceway would end in the semifinals. Prock had to pedal his Montana Brand / Rocky Mountain Twist dragster after smoking the tires and was unable to chase down Doug Kalitta, the U.S. Nationals event winner who ran a smooth 3.740-seconds at 333.91 mph for the win. Prock had a 4.015-second pass at 295.66 mph.

“Another good points day; made it to our fourth consecutive semifinal and just came up a little short. The car left extremely fast for some reason and we’re scratching our heads about it. Not a bad day overall. I would’ve liked to get in the final round, but good points day all in all and we’re going to be able to contend for this championship,” said Prock who moved to seventh in the NHRA Mello Yello points standings.

Brittany Force and the Advance Auto Parts team were unphased by the significantly warmer temperatures that greeted them on race day morning. The national record holder took the first-round win with a 3.691-second pass at 326.79 mph, the quickest pass of the session, bettering Todd Paton’s 4.265 at 207.98 after he had to shut off at halftrack.

Facing the former national record holder, Clay Millican, in the second round, Force dropped a cylinder before the finish line and had an engine explosion but held on for the win at 3.784-seconds and 306.79 mph. Millican had to shut off early for a 3.927 pass at 266.42.
Force’s race day would come to an unfortunate end when the 2017 Top Fuel world champion had to shut the Advance Auto Parts dragster off at the finish line after crew chiefs David Grubnic and Mac Savage noticed a fuel leak.

“It was leaking up at the manifold. It was through a jumper line we have on our fuel rail and the leak was bad enough that it would have ended up pulling in front of the rear tire. It wasn’t safe to run the car so we shut the car off,” Grubnic explained. “It’s just one of those things that happens. We found the leak and fired the car back up here in the pit to make sure everything was good and it is so we’ll be ready.”

“Great weekend in Reading. It was the first race in the Countdown and an awesome weekend for the Advance Auto Parts team. We are officially the quickest team out here on the race track, running a 3.623 setting the national ET record so I’m very proud to hold that with David Grubnic, Mac Savage and all the Advance Auto Parts boys,” said Force who moved into second in points. “I had a good race day. Unfortunately, in the semis we had a fuel leak, a loose line so we know what the problem is and we know how to fix it. It won’t happen again and we’ll pack up and go to the next one and push a little bit harder.”

Robert Hight, who qualified sixth, handled his Jimmy Prock and Chris Cunningham tuned Auto Club Chevy Camaro to a solid 3.919-second pass at 331.04 mph to be third quickest of the first round. He would defeat Jonnie Lindberg who pedaled his way to a 5.774 at 127.88 mph. Hight’s win would pit him against veteran racer and eventual race winner Jack Beckman in the quarterfinals.

“We still have the same gremlins in the clutch. We went to Indy and tested this week and thought we had it fixed, and obviously we didn’t. We’re going to stay here tomorrow and test,” said Hight who moves to third in points. “We didn’t get beat up that terrible in the points, but we definitely can’t afford to have two bad races in a row. We have to get it fixed and move on to St. Louis. We won there last year and have to win there again.”

The NHRA Mello Yello Countdown to the Championship continues with the second of six races, the AAA Insurance NHRA Midwest Nationals at World Wide Technology Raceway in St. Louis, Sept. 27-29.