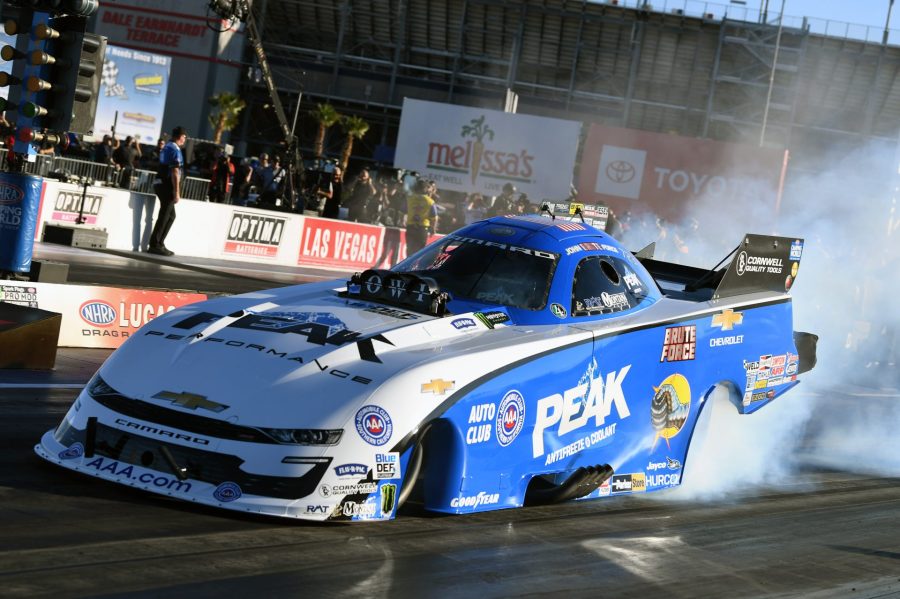 POMONA, Calif. (Nov. 10, 2021) – John Force and his PEAK Antifreeze and Coolant Chevrolet Camaro SS team are keeping their championship hopes alive as they head to the Auto Club NHRA Finals at Auto Club Raceway at Pomona. With history, luck and a dominant hot rod on his side, the 16-time champion just might get number 17.

While Force’s challenge is considerably more daunting because he has four drivers ahead of him while his daughter Brittany has only one, Force has history on his side. He has won eight times at the Auto Club Finals, more often than anyone in any professional class, but has a total of 16 overall victories at Auto Club Raceway at Pomona. Force has also been runner-up in 2013, 2014 and 2016. Despite these numbers, he’ll need lots of help to get around the four drivers ahead of him.

“I’m still in it. It could still happen. I know it’s a slight chance, but it’s still a chance and we’re going to do everything we can to try to make it happen,” Force said. “Winning championships, it comes down to the wire, things can get wild. I would know. It’s going to be a fight, but I know this PEAK Chevy team, they’re up for it. Danny Hood, Tim Fabrisi, Joe Barlam and all my guys, they want it just as much as I do.”

Force is sitting the No. 5 points position, 155 back from the top spot. The PEAK Chevy team have kept themselves as viable candidates for the 2021 world championship thanks to five final round appearances that included three wins at the Charlotte Four-Wide, New England Nationals and sharing the winners circle with daughter Brittany in Topeka at Heartland Motorsports Park. In addition, they’ve had three No. 1 qualifying positions (Charlotte Four-Wide, U.S. Nationals and Carolina Nationals). While a win won’t guarantee a championship for Force, it would extend to 14th the number of seasons he has won at least four races

The Auto Club NHRA Finals at Auto Club Raceway at Pomona begins with qualifying Friday at 4 p.m. and continues Saturday with two sessions at 12:30 and 4 p.m. Eliminations are slated for Sunday at 10 a.m. Television coverage of the final event in the 2021 NHRA Camping World Series season will be on Sunday with a qualifying show at 2 p.m. ET and finals show following at 4 p.m. ET on FOX Sports 1 (FS1).