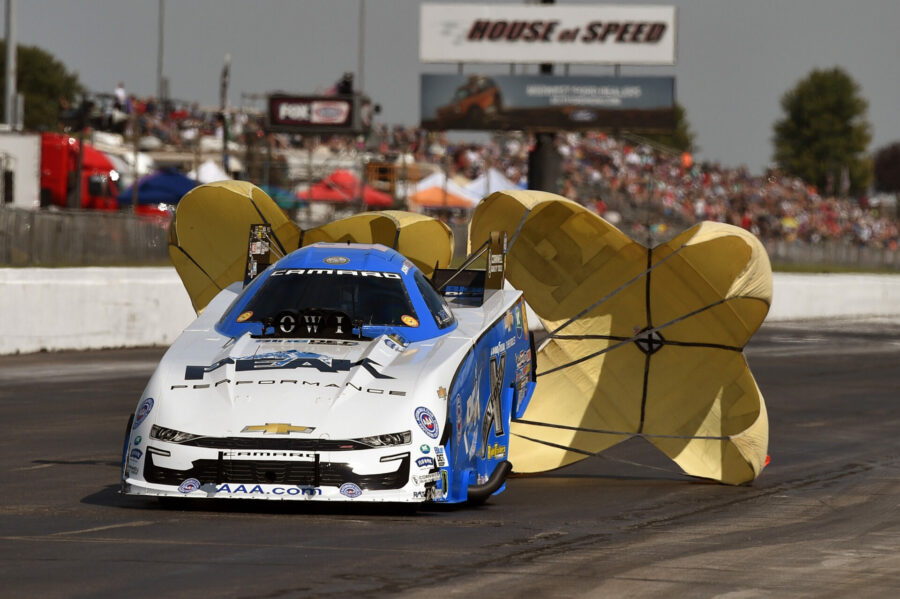 TOPEKA, Kan. (Aug. 14, 2022) – For the 264th time in his career, John Force made a final round appearance in his PEAK Antifreeze and Coolant Chevrolet Camaro SS. The 16-time champion finished runner-up Sunday at the Menards NHRA Nationals at Heartland Motorsports Park. Robert Hight had the Automobile Club of Southern California Chevy in the semifinals while Brittany Force in the Monster Energy / Flav-R-Pac dragster and Austin Prock in the Montana Brand / Rocky Mountain Twist dragster had first round exits.

Eliminations started with some confusion on the starting line for John Force and the PEAK Chevy Camaro. Against Cruz Pedregon, both competitors would stage deep then Pedregon would leave too early for a red-light disqualification. Force didn’t immediately move off the line but eventually idled his way down track at 23.671-seconds and 53.29 mph for the win.

Against Ron Capps in the second round, Force and the PEAK Chevy would have to chase the reigning world champion down, managing to do so near the lights. Force would pick up the win with a 4.033-second pass at 318.77 mph to Capps’ 4.047 at 312.21, making the margin of victory only .0008-seconds.

The final round, Force’s third this season and 14th at Heartland Motorsports Park, would match the PEAK Camaro with longtime rival Bob Tasca III. Force would have the advantage on the tree but Tasca would have enough to beat him to the finish line with a 3.999 at 316.82 against Force’s 4.131 at 311.27.

“It was a good day for this PEAK Chevy. My guys, they worked hard, gave me a good race car, had a little luck in the first round, but had some good racing throughout the day,” Force said. “We look good heading into the Countdown in a couple weeks, think we are just a few points out of the top three. Loved racing here in Topeka, appreciate all the fans that came out and braved the heat. They make it all worth it.”

Robert Hight and the Auto Club Chevy team opened race day with a side-by-side race against Jim Campbell. Hight would have the starting line advantage and never trail crossing the finish line with a 4.003-second pass at 273.05 mph to better Campbell’s 4.062 at 310.13, his best run of the event.

In the second round, Alexis DeJoria would have to shut off early for a 4.580 pass at 184.45 allowing Hight and the Auto Club team to drive around her for a 3.987-second pass at 320.05 mph and a ticket into the semifinals to race boss John Force. Hight would have the starting line advantage and lead until half-track before Force drove around him his 4.000 to Hight’s 4.052.

“Not a bad weekend for this Auto Club Chevy. Whenever you’re meeting a teammate you always hope it’s in the final round, but if we’re going to come up short we hope it’s to John, guarantees a JFR car is moving on.” Hight said. “We’re still in the points lead, still running consistent, just need to make sure all of this carries over into the Countdown in a couple races.”

Brittany Force and the Monster Energy team’s defense of the event win came to an end in the first round after they dropped a hole and had to shut off early. They would cross the finish line a 4.123-seconds at 219.40 mph, no match for Antron Brown’s 3.816 at 310.70 mph, who would go on to win the race. It was the first time since this year’s Gatornationals that the Monster Energy / Flav-R-Pac dragster did not make it out of the first round.

“Disappointing way for this Monster Energy / Flav-R-Pac team to end our weekend here in Topeka. For the first time since Gainesville, Fla. we were out in the first round. The heat and humidity made running a challenge,” Force said. “First round we had a cylinder out from the step and there was no way to recover and catch Brown before the stripe. To find the positive in the weekend, we remained in the points lead and we are locked into the Countdown to the Championship. We are all looking forward to Brainerd next weekend and getting back to our normal routine.”

Austin Prock and the Montana Brand / RMT dragster ended their weekend at Heartland Motorsports Park with an engine explosion and oil down resulting in a 3.895-second pass at 258.86 mph that was bettered by Josh Hart’s clean 3.823 at 315.56 in round one.

“I’m lucky to have good teachers in my corner. My dad definitely gives me the right attitude. He told me before the run, I have to believe in myself and he told me to go up there and run a .040 light and that’s what I did,” said Prock “Unfortunately, I have a lot of practice riding these things out when it’s blown up and spilled oil out of it, but I tried to get stopped as soon as possible. Really want to apologize to the fans sitting up there in the stands, thanks for coming out in this heat. I hope you enjoy the show, sorry we couldn’t put on a very good one for you.”

The John Force Racing teams will head to Brainerd Minnesota next weekend Aug 19-21 for the Lucas Oil NHRA Nationals at Brainerd International Raceway, the 15 of 22 events on the NHRA Camping World Drag Racing Series schedule.