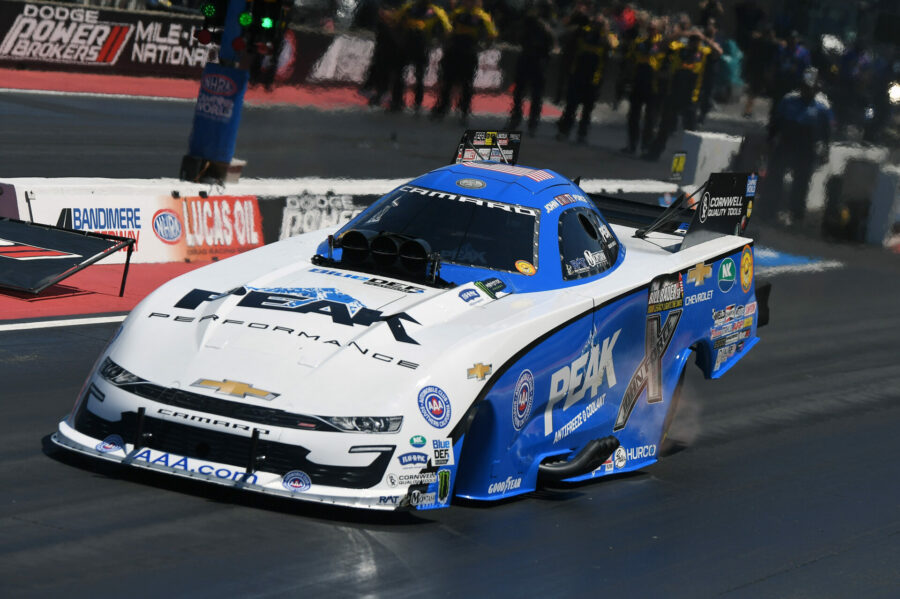 SONOMA, Calif. (July 21, 2022) – John Force and the PEAK Antifreeze and Coolant Chevrolet Camaro SS team are chasing their second win of the season and a boost to their No. 4 position in the NHRA Camping Drag Racing Series Funny Car points standings as they head to this weekend’s DENSO NHRA Sonoma Nationals at Sonoma Raceway.

“Sonoma Raceway, another Bruton Smith track, another beautiful racing facility up in wine country and a fan favorite,” Force said. “We had some bad luck in Denver, getting beat by my other Funny Car, Robert Hight and the Auto Club team, but they got the win. Hopefully we won’t see them this weekend until the finals. My crew chiefs, Danny Hood and Tim Fabrisi, they have this PEAK Chevrolet running well, it’s fast and it’s been consistent. Just need to keep it going and I need to make sure I can keep up.”

After prevailing earlier this year at the Circle K NHRA Four-Wide Nationals at Charlotte, Force is trying to win multiple events for the 27th different season. He currently has the PEAK Antifreeze and Coolant sitting solidly in the No. 4 position in the points standings.

Racing at the DENSO NHRA Sonoma Nationals at Sonoma Raceway begins with qualifying Friday at 8 p.m. PT and Saturday at 1 p.m. and 4 p.m. with eliminations beginning at 10:30 a.m. Television coverage of the event will be on FOX Sports 1 (FS1) for qualifying on Saturday at 10:30 a.m. ET and Sunday at 1:30 p.m. Eliminations will air on FOX Broadcasting Network Sunday at 4 p.m. ET.