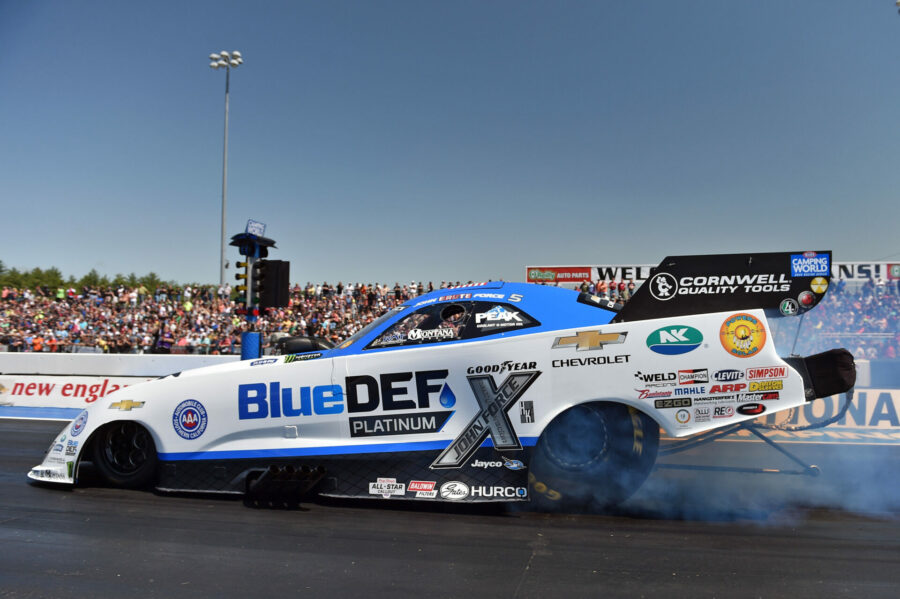 EPPING, N.H. (June 04, 2022) – Defending event champion John Force and the PEAK / BlueDEF PLATINUM Chevrolet Camaro SS Funny Car made strides Saturday at New England Dragway to secure the No. 2 qualifying spot at the NHRA New England Nationals. Brittany Force and the Monster Energy / Flav-R-Pac team set the track speed record and will also start race day from No. 2. Robert Hight and the AAA New England jumped to No. 3 and Austin Prock with the Montana Brand / Rocky Mountain Twist dragster settled into No. 7.

Saturday was all about improvement for John Force and his BlueDEF Chevy team. Despite hazing the tires and shutting off early during their first run of the day, Force and the PEAK team would better their performance recording a 4.296-second pass at 209.56 mph. The Danny Hood and Tim Fabrisi tuned Chevy Camaro really picked things up in the final session blasting to the No. 2 spot with a 3.881-second pass at 330.31 mph. Force will open eliminations facing-off with Terry Haddock.

“I joked with my crew chiefs they should let me get in there, but they know I don’t what I’d be doing. No, but you know, you just have to trust them, sit back and trust them and that’s what I did, that’s what I always do, and it worked, it usually works,” said Force who picked up three bonus points for being quickest of the last session. “Danny Hood and Tim Fabrisi, I know they know what they’re doing, I knew we’d pick it up and we’d be just fine for race day. Now we just have to take it one run at a time and get this PEAK / BlueDEF Chevrolet in the winners circle tomorrow.”

Brittany Force and the Monster Energy team stayed consistent throughout qualifying at the NHRA New England Nationals. They started Saturday off going quickest of the second qualifying session with a 3.712-second pass at a track record 334.32 mph to earn three bonus points. To close out qualifying, the 2017 event winner had a 3.763-second run at 327.11 mph. She will start race day at New England Dragway from the No. 2 qualifying spot thanks to her Friday evening run of 3.687 at 329.50.

“This Monster Energy / Flav-R-Pac team ended up No. 2 after qualifying here in Epping on that 3.68 run in the first session but, the impressive run was earlier today in the heat, on a hot race track we ran a 3.71, which was a great run,” said Force who will race against Clay Millican first round. “We’re hoping to repeat that performance. Our plan is not even to step it up or push much harder but stay low 3.70s all day tomorrow.”

After missing out on a run due to a mechanical failure on Friday, Robert Hight and the AAA Chevy would start Saturday losing traction early to crawl to 11.317-seconds at 75.34 mph. The three-time championship team led by standout crew chiefs Jimmy Prock and Chris Cunningham turned things around in the final session rocketing to a 3.889-second run at 329.34 mph to shoot from No. 14 to No. 3.

“It gives you a lot of confidence going into race day with a great run like that, even though in Richmond this AAA team didn’t have a good run in qualifying and we went into race day still confident and got the win. But a run like that in the final qualifying session is amazing,” said Hight, who will face Cory Lee in the first round. “Honestly, I think we can make runs like that all day tomorrow so I’m excited.”

Saturday would be a mixed bag for Austin Prock and the Montana Brand dragster. They would have to shut off early to coast to a 5.437-second pass at 125.05 mph before improving to run 3.793 at 306.19 mph but suffered an engine explosion down track. They wouldn’t better their Friday evening pass of 3.749 at 293.22 and settle for the No. 7 position to face Antron Brown in the first round.

“It was a frustrating end to the day for this Montana Brand / Rocky Mountain Twist team. We ended up blowing up another engine so we’re a little frustrated about that. But we’ve got Antron in the morning and we’re going to be the marquee matchup in the first round. Those big first rounds are what I live for. I’m looking forward to going into Sunday morning. Sunday is a new day so we should be fine.”