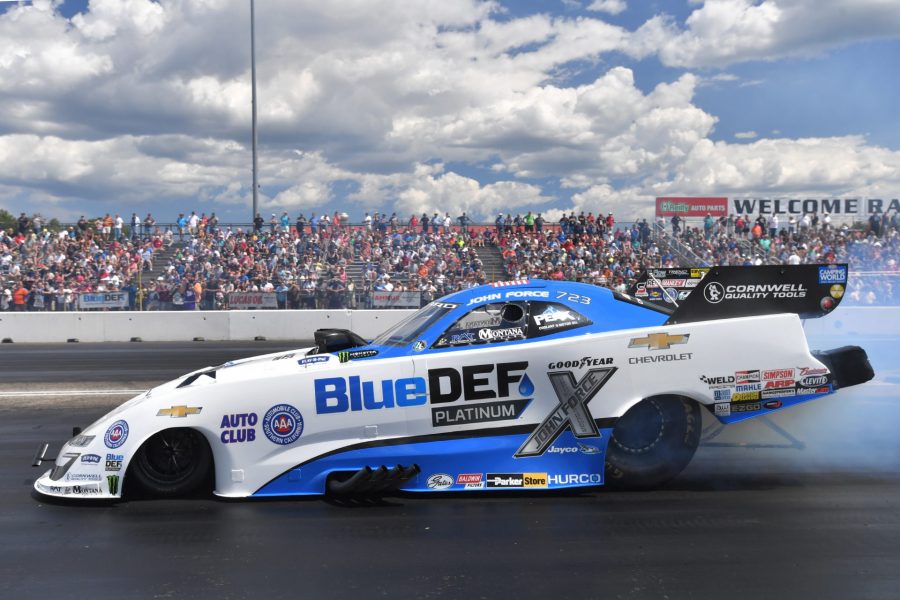 Force and his Daniel Hood and Tim Fabrisi led PEAK / BlueDEF team steadily worked their way to dominating the Funny Car field. They kicked off the 2021 NHRA Camping World Series season with a quarterfinal finish at the season opening Gatornationals. At the first four-wide event of 2021 at The Strip at Las Vegas Motor Speedway, Force would qualify No. 2 and at the NHRA Southern Nationals at Atlanta Dragway, Force and his PEAK / BlueDEF team would make their 257th final round appearance. Force earned his 161st No. 1 qualifying position before continuing his dominance into race day at the NHRA Four Wide-Nationals at zMAX Dragway and coming out with his 152nd national event victory. Most recently, Force tallied his second win of the season, 153rd of his career at the NHRA New England Nationals.

The stout performance hasn’t just been reserved for the PEAK BlueDEF Chevy. The NHRA New England Nationals was the third consecutive race with a John Force Racing event winner and the fifth time in six races a John Force Racing Funny Car was in the finals. The team also has a finals appearance in the Top Fuel category.

“John Force Racing, we’re running good. The whole team, myself with PEAK BlueDEF, Robert over there with AAA and Brittany with Flav-R-Pac and Monster Energy. It sure doesn’t look like we took a year off,” Force said. “Our crew chiefs are dialed in; our teams are working well together. It’s all working for us. Now we have to stay consistent, we want to stay up there in the points, be in the fight, but we have to keep it going to fight for the championship and that happens in the Countdown. We’ll be ready, we’ll be good.”

Having been a regular at Summit Racing Equipment Motorsports Park’s Night Under Fire event long before the national event was added, Force is heading to a track where he has probably made more runs than anyone else in history. While he has numerous victories at the match race, Force will be chasing just his second victory at the facility. Force won the event in 2014 and was No. 1 qualifier in 2013.

“I always love coming to Norwalk. Bill Bader, well now it’s his son, Bill Bader Jr., they always put on a great show. We’re going there with a full crowd, with everything having been shut down, the fans need the excitement, they need the entertainment. That’s what we’re going to give them,” Force said. “We’ve got sponsors coming back out to the races, PEAK and Cornwell Tools and some others, so we’re looking forward to entertaining and taking care of them. And taking care of the fans. I’m looking forward to my most important job, getting into my PEAK BlueDEF Chevy Funny Car and strapping in to make runs. Header flames, 330 mph, 11,000 hp, how much better can it get?”