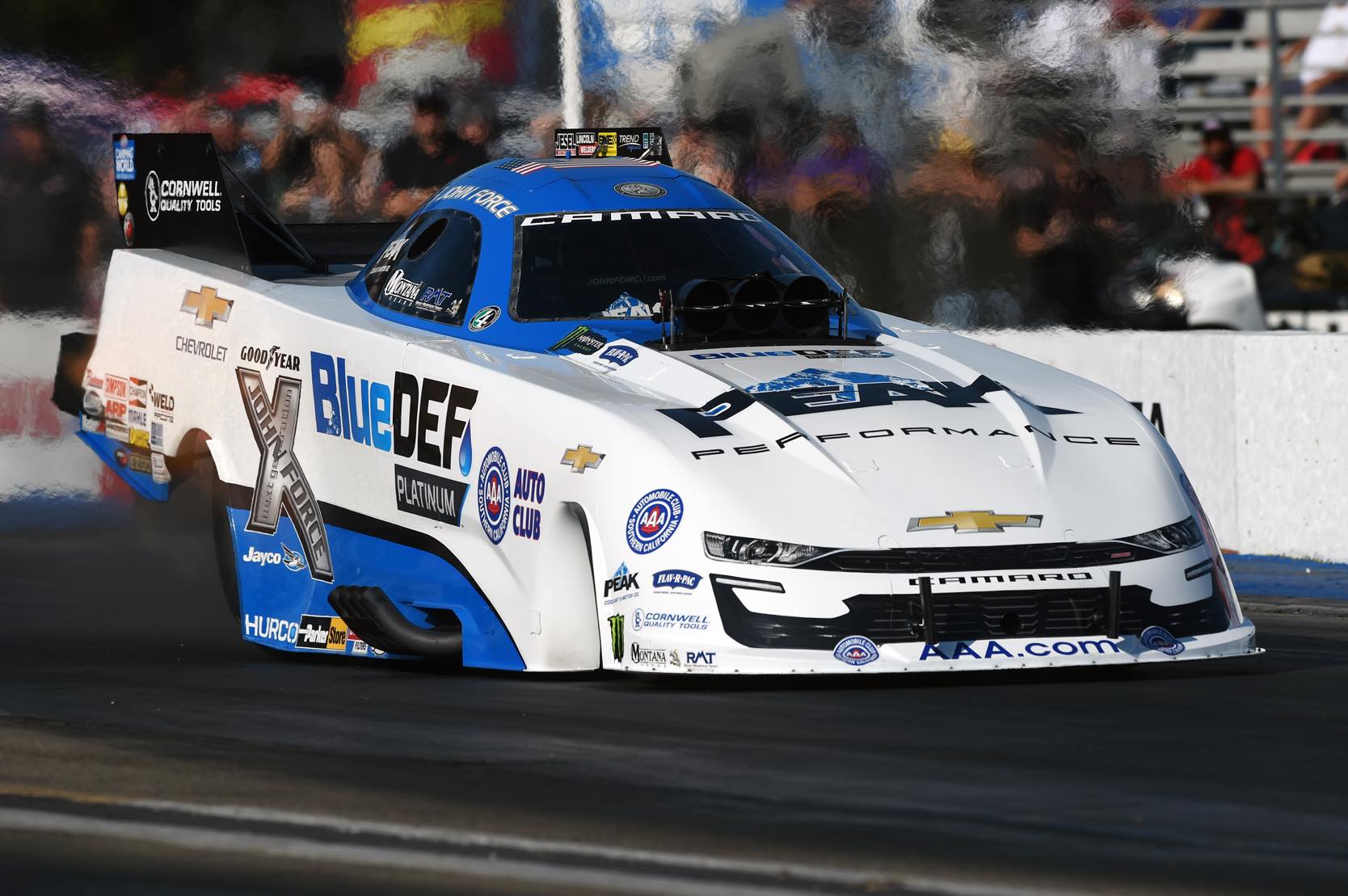 Sixteen-time world champion John Force and the PEAK / BlueDEF Chevy had a treacherous road ahead of them entering race day. Qualifying was tricky for the Danny Hood and Tim Fabrisis led team, putting them in the No. 12 spot to start race day with a monster match-up against Matt Hagan. Force would run 4.054-seconds at 313.66 mph to defeat Hagan’s 4.112 at 308.99. Giving Force the opportunity to move around the multi-time champ in the points.

Longtime rival Cruz Pedregon was waiting for Force in the quarterfinals. It would be a close race with Force coming out on top at 4.353-second and 260.46 mph to Pedregon’s 4.361 at 218.37 after they both had to pedal their way to the finish line. In the semifinals, Force would have to face another former Funny Car champion, Ron Capps. It would be Capps who got the better of Force and the PEAK team going 4.158-seconds at 300.06 mph to beat Force’s 4.659 at 195.19 and eventually win the race.

“Today was good. Improved from qualifying, Danny Hood, Tim Fabrisi, they learned from qualifying and that’s what you’re supposed to do,” Force said. “Really had to work hard today, teams and drivers. The conditions made it tough, the track made it tough. This PEAK Chevy, these guys, they made put in the work. They love it and I still love it. I’m still in it. Not letting the old man in, he’s creeping on me though.”

Entering race day from the No. 1 position off their only full pass of the weekend, Brittany Force and the Flav-R-Pac team laid down an impressive 3.843-second pass at 322.88 mph during their bye run first round. Lined up with Justin Ashley in the quarterfinals, the Flav-R-Pac dragster dropped a cylinder to run only 4.013-seconds at 308.99 mph that was bettered by Justin Ashley’s 3.912 at 311.49.

“These weekends only make you tougher as a team. We got another No.1 qualifier but had a second-round exit on race day. Going into Sunday we knew going rounds was going to be a challenge. We missed our shot at Q2 which was a crucial run in the heat to set us up for race day,” Force said. “Luckily we had a bye the first round and we laid down a 3.84 in round one which was an amazing pass on a hot racetrack. In round two we had holes out at the step and had no chance next to Justin Ashely who was on a clean run. As a team we pack up and head to Norwalk for Night Under Fire. Match racing will give us an opportunity to go testing and have a little fun. Maybe having a little fun will help us win in Topeka.”

Coming off a win at the Sonoma Nationals, Robert Hight and the Auto Club Chevy started race day from the No. 2 position to take on Terry Haddock. Hight would go 4.251-seconds at 245.90 mph after getting the tires lose at the finish to defeat Haddock who had trouble at the start for a 10.763. In the quarterfinals Hight would contest J.R. Todd. Both Funny Car champions would run identical elapsed times of 4.192-seconds having the result come down to reaction time. On this rare occasion, sharp shooting, deadly concentrated Hight would go .101-seconds while Todd would better him at .077 for the victory.

“I don’t like losing like that. This Auto Club team has worked hard, not just this weekend, but all year. We have a good car, Jimmy Prock and Chris Cunningham figured some things out in Sonoma and we were doing well,” Hight said. “To go out on a hole shot, I’m just not very happy. I missed the mark. Luckily, we only have one weekend off and then we head to Topeka. I’ve done well in Topeka and I’m looking forward to putting this one behind me.”

The hot rods of Brittany Force and John Force will make a stop in Norwalk, Ohio for Summit Racing Equipment Motorsports Park’s fan-favorite Night Under Fire on August 7. Then all three John Force Racing drivers will be at the Menards NHRA Nationals at Heartland Motorsports Park in Topeka, KS, August 13-15.