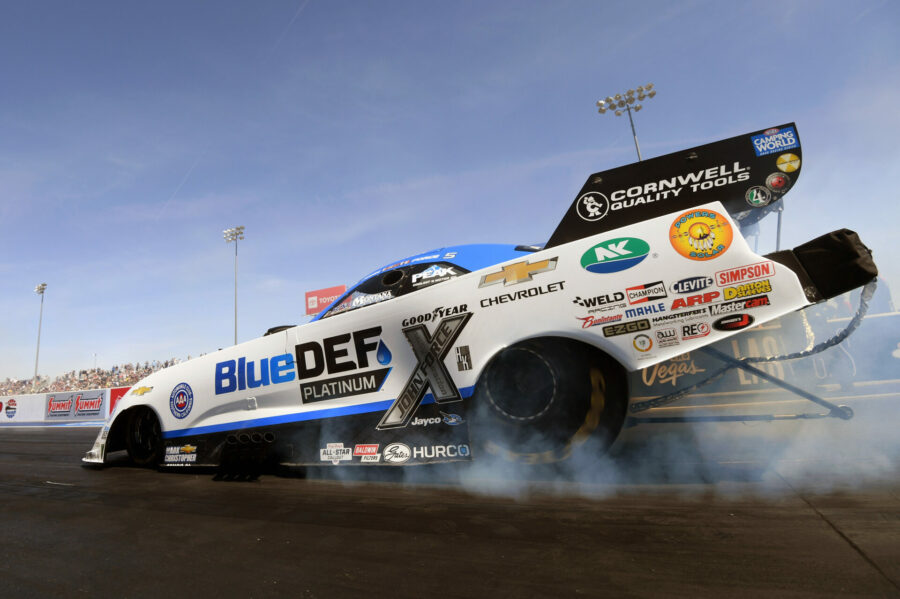 CONCORD, N.C. (April 28, 2022) – John Force and the PEAK / BlueDEF PLATINUM Chevrolet Camaro are the defending champions at the Circle K NHRA Four-Wide Nationals at zMAX Dragway. Still chasing a win in the 2022 Camping World season, the PEAK Chevy team will be hoping to repeat on last year’s success.

Force beat J.R. Todd, Alexis DeJoria and Cruz Pedregon to the finish in last April’s final quad to pick up the victory. The sport’s all-time biggest winner with 154 tour titles, Force has raced in six final quads at Charlotte, finishing first twice and runner-up twice.  His six appearances are the most by any Funny Car driver while only Antron Brown matches with six in Top Fuel.  A year ago, he started his PEAK Platinum Chevrolet Camaro SS from the No. 1 qualifying position at both the spring and fall Carolina Nationals at zMAX. His only other No. 1 start in either Charlotte race came in the 2011 Four-Wide. Force and Robert Hight share with J.R. Todd, Ron Capps and Jack Beckman the record for four-wide Funny Car wins with two each.

“Bruton Smith built the Bellagio there in Charlotte,” Force said. “I love racing at all his track but zMAX is something else, especially four-wide. It’s always nice to return to someplace where you won the year before. It gives you a little confidence boost, especially when you might be struggling. We’re holding our own, this PEAK team. Danny Hood and Tim Fabrisi pour themselves into this car and all I have to do is make sure to keep it straight. My guys, they’re working hard and it’ll pay off, hopefully as early as this weekend.”

Force had pre-season success at testing at Wild Horse Pass Motorsports Park in Arizona but stumbled at the season opening Winternationals. The PEAK / BlueDEF team turned things around back at Wild Horse Pass Motorsports Park for the NHRA Arizona Nationals. They would qualify No. 3 and have a semifinals appearance. Despite quarterfinal finishes at both the Gatornationals in Gainesville and the Las Vegas Four-Wide Nationals and a first round exit at the SpringNationals at Houston Raceway Park, Force remains fifth in the points standings, just 28 back from fourth.

Qualifying at the Circle K NHRA Four-Wide Nationals begins Friday with sessions at 4:15 p.m. and 7:45 p.m. ET and continues Saturday with additional sessions at 1:15 p.m. and 4:45 p.m. Eliminations are slated to begin Sunday at noon. For television coverage, tune into FOX Sports 1 (FS1) at 7 p.m. ET on Friday, 11 a.m. ET on Sunday and, for eliminations, Sunday at 7 p.m. ET.