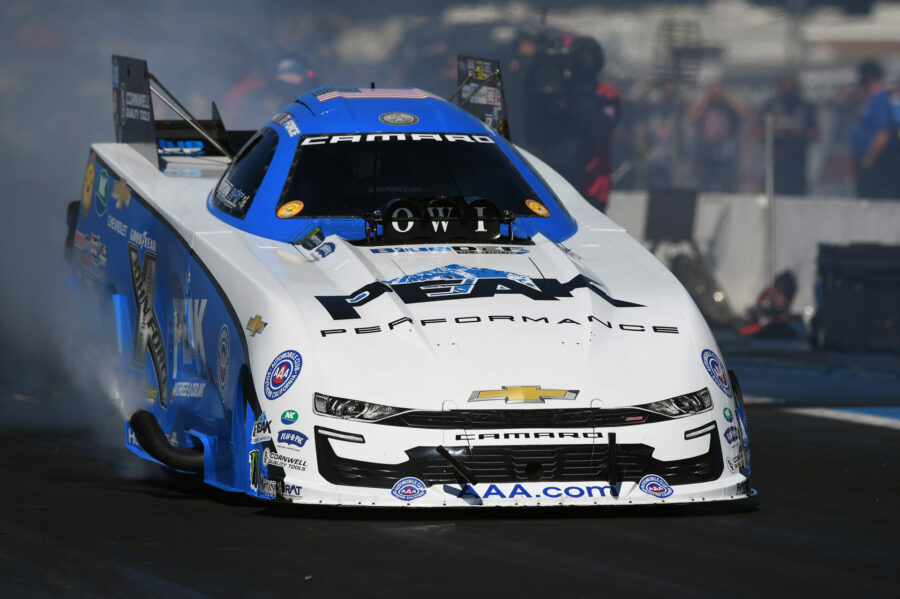 INDIANAPOLIS (Sept. 01, 2022) – John Force and the PEAK Antifreeze and Coolant Chevrolet Camaro SS team enter the Dodge Power Brokers NHRA U.S. Nationals sitting fifth in the Funny Car points standings looking for a solid weekend to make a last-minute shift in the standings as they head into the NHRA Countdown to the Championship.

“I’m excited to be in Indy, to be racing at the U.S. Nationals. Having a race within a race, three days of qualifying, race day on Monday, it’s a big deal. The fans will be packed in for a great show,” Force said. “Final race before we get into the Countdown and this PEAK Chevy team has got a chance to make a move in the points. We’ve struggled a bit but Danny Hood, Tim Fabrisi, all these young guys, they’ve been working hard. We’ll be out there making every run count, hoping to win the Pep Boys callout and end up in the winners circle on Monday.”

Adding to the prestige of the weekend is the Pep Boys NHRA All-Star Callout, a race within a race with a purse of its own. The all-time leader in specialty event victories with 13, Force has won a specialty event at Lucas Oil Indianapolis Raceway Park eight times. He doubled up in 1993 and 1996, winning both an all-star event and the US Nationals on the same race weekend.

Competition at the prestigious U.S. Nationals kicks off with five rounds of qualifying beginning Friday evening at 7:30 p.m. with two runs Saturday at 2:45 and 6:30 p.m. and Sunday at 1 and 4:30 p.m. Eliminations are set to begin on Monday at 10 a.m. The Pep Boys NHRA All-Star Funny Car Callout will be Sunday with first round at 1:20 p.m., semifinals at 2:45 p.m. and final round a 4:55 p.m. Television coverage of qualifying and the Callout will be on FOX Sports 1 (FS1) with shows Sunday at 1, 4 and 5:30 p.m. ET. Eliminations coverage will be split with a show at Noon ET on FS1 and the 2 p.m. ET on FOX Broadcasting Network.