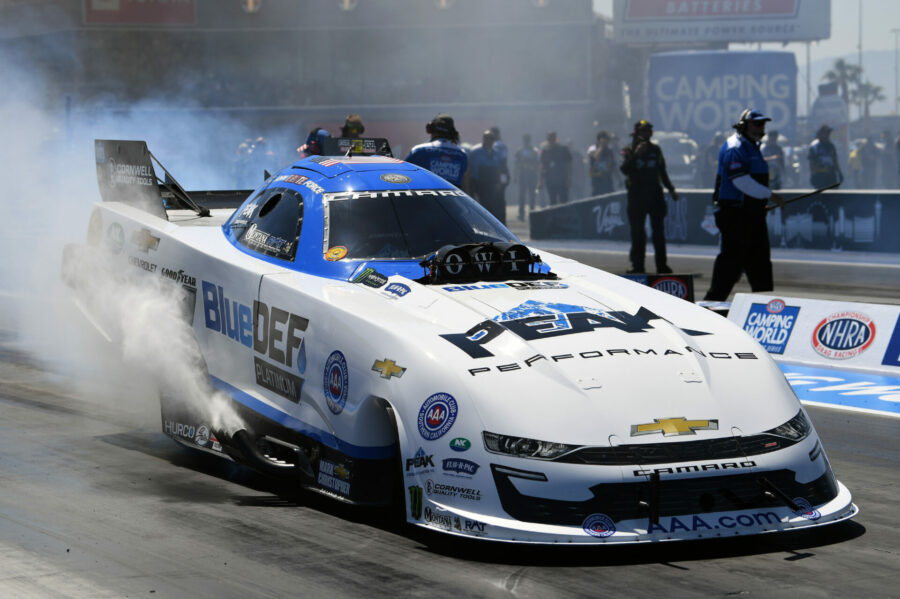 LAS VEGAS (April 01, 2022) – John Force and his PEAK / BlueDEF PLATINUM Chevrolet Camaro SS team didn’t waste any time getting back into their groove Friday at the NHRA Las Vegas Four-Wide Nationals. The 16-time champion landed in the No. 1 spot in their first try at The Strip at Las Vegas Motor Speedway. Brittany Force and the Monster Energy / Flav-R-Pac team are currently No. 4 with Robert Hight and the Automobile Club of Southern California team are sitting No. 6 and Austin Prock and the Montana Brand / Rocky Mountain Twist dragster are 14th.

“We’re searching for consistency. This PEAK / BlueDEF Chevy was fast at testing, we lost it in Pomona and here, well it went down there the first run but then didn’t,” said Force who gained three bonus points for being quickest of the first session. “I had a meeting with my guys this morning. I said if anyone was the problem, it’s been me. I got out here to this racetrack today and I was a different animal. I’m excited and so my guys are excited. I hope it lasts. Getting out there and winning this four-wide would sure help that.”

Brittany Force and the Monster Energy team started the day strong with a 3.765-second pass at 329.50 mph that earned them two-bonus qualifying points for being second quickest of the session. On their second pass, Force would have to shut off early and coast to a 5.349 at 124.20. The Monster Energy team would shift down to the No. 4 spot.

“NHRA is out here in Las Vegas putting on a show of four-wide racing. All our other teams are in, and, the exciting thing is, we get two more runs tomorrow. Having four qualifying sessions, it really helps the team, helps the driver, helps everybody going into race day knowing that you get a solid pass down each lane. We’ll be ready for it tomorrow and should put on a good show on Sunday.”

Robert Hight and the Auto Club team started the weekend off with a 3.937-second pass at 326.96 mph that originally put them fourth. In their second go at The Strip, Hight and his Jimmy Prock and Chris Cunningham tuned Chevy would keep it consistent improving to a 3.931 at 327.51 that land them in sixth to close out the day.

“It’s encouraging that this Auto Club Chevy went down the track both runs but it’s not anywhere near what we were looking for,” Hight said. “We’re at a high elevation with thinner air, and we’re just not making enough power. We’ve got to make bigger moves tomorrow. There are 3.80-second runs are out there and that’s what we’re going to be shooting for.”

Austin Prock and the Montana Brand / RMT dragster ran into tire smoke on their first qualifying pass to coast to a 6.231-second pass at 198.52 mph. In the second session, the Montana Brand dragster would drop cylinders and have to shut off early and go 4.590 at 172.12 to land in the No. 14 spot.

“We had another rough start to the weekend. This Montana Brand dragster is just having some mechanical issues and we’re trying to get them all sorted out and get all our ducks in a row,” Prock said. “Kind of confused on why we dropped a cylinder, but we’ll get after it tomorrow. We’re looking forward to having a good start with two more runs of qualifying. Having four runs here is definitely going to help our whole situation. Hopefully we can make two quick passes, but nothing really matters until Sunday.”

Qualifying at the NHRA Four-Wide NHRA Nationals continues Saturday with two sessions at 1 p.m. and 3:30 p.m. (PT). Eliminations are slated to begin at noon on Sunday. Racing action will be televised on FOX Sports 1 (FS1) and begins with qualifying Friday at 7 p.m. ET and continues Sunday at 12:30 p.m. ET. Eliminations will air Sunday at 7 p.m. ET.