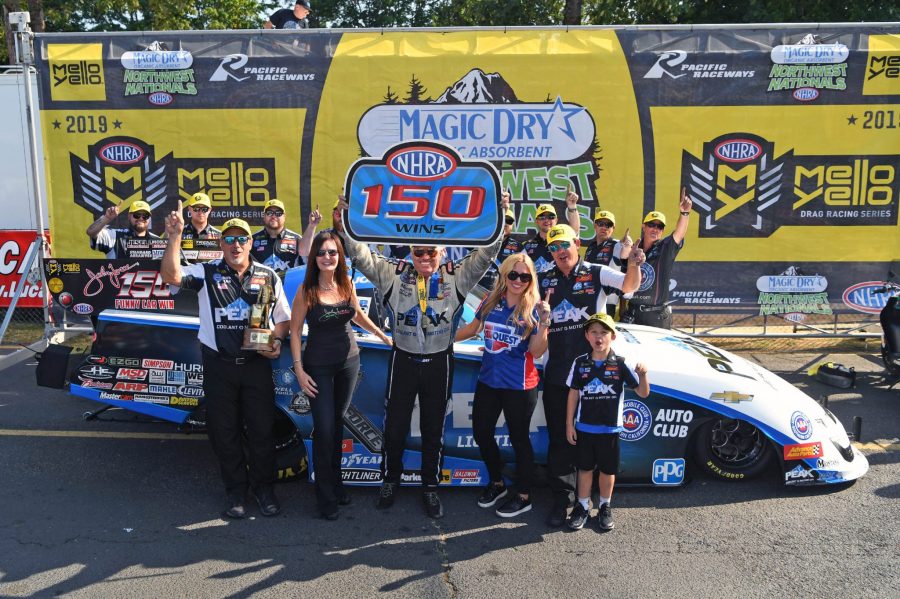 KENT, Wash. (Aug. 4, 2019) — John Harold Force, who as a kid battled polio and poverty while dreaming of a career in professional sports, applied an exclamation point to one of motor racing’s most unlikely success stories Sunday when he drove his PEAK Coolant and Motor Oil / Lighting Chevrolet Camaro SS to a final round victory over Ron Capps to win the 32nd annual Magic Dry Organic Absorbent NHRA Northwest Nationals at Pacific Raceways.

“Well, it’s been 25 races, Denver last year. (Crew chief Brian) Corradi and Daniel Hood and for (Tim) Fabrisi have had to put up with me all year, not happy with the way the car steered, how I sat in it, not happy with so many things. And then I got the monkey on my back and it drives you nuts. You go to bed every night and (but) the monkey taught me so much, that you need to focus on your car if you want to do good. I’m just doing stuff all the time and I don’t even know my car. And you know Corradi and (Austin) Coil said. ‘You’ve got to get to know your car. You’ve got to live it. You’ve got to love it. You’ve got to study the drivers.’ I said I do all that, but I wasn’t. So sometimes you need a slap in the face. And that was the monkey that made me focus. To live my car and it’s been fast the last four or five races. Give me a good race car, I can race. I may not be as young as these kids and a hot shot on that Tree. But I’m excited. The future of our sport. There’s so much potential out here.”

That’s a remarkable accomplishment for someone who didn’t earn his first NHRA tour victory until he was 38 years old and whose first 50 races on the NHRA circuit produced no wins and 17 DNQs.

“Never thought I’d be lucky enough to get five wins. I remember going to nine finals and somebody says ‘hey, is this like winning your first championship or your first final round?’ I said don’t put that in my head. It’s too crowded in there. I had to stay away from it, not think about it. TV was setting up special shows about me and then I fail. But I didn’t fail; I was doing the best I could. Failure is part of it and that’s what I told Brittany. When you get that gut ache and turn it into a positive. That’s the key.”

Force’s latest milestone was made all the sweeter by the fact that he shared the podium with rookie Top Fuel driver and teammate Austin Prock, who drove the Montana Brand / Rocky Mountain Twist dragster to a breakthrough victory that included a final round upset of reigning series champion and runaway point leader Steve Torrence.

“Danny Hood and I, we called that from the get-go. We said when John gets 150, I’m going to get my first one,” said Prock. “It all came together just perfectly. I’m just pissed that Force is going to steal the cover of National Dragster.”

Force’s march began with an opening round victory over Jim Campbell secured with the quickest time of eliminations at 3.895 seconds. That set up a second-round showdown with teammate, protégé and points leader Robert Hight, driver of the Auto Club Chevy Camaro, to whom he had dropped six straight decisions, four to start the current campaign.

The magnitude of Sunday’s accomplishment cannot be overstated insomuch as no other pro driver has won as many as even 100 races.

Even before he hoisted the Seattle trophy for a record ninth time, second only to his 11 victories in the Lucas Oil Nationals at Brainerd, Minn., an event to which he will return in two weeks, the former Driver of the Year had secured a record 35th consecutive Top 10 finish in NHRA’s Mello Yello Series.

“I’ve crashed here at Pacific Raceways so many times. I’ve won here so many times. There are certain tracks I’m really happy at. I love Indy, Pomona, I love Vegas, Seattle is special. I have no complaints. I’m 70 years old and I do it because I love the fans and God will tell me when it’s time. You’ll know when your old body says you’re done. I’m giving it all I got and I’m glad I got 150.”

He now has won at least one tour event in 32 of the last 33 seasons although Sunday’s success was his first with new crew chiefs Brian Corradi and Dan Hood, who this year moved over to the PEAK Camaro after last year directing Force’s youngest daughter, Courtney, to four wins and a sixth place finish in Funny Car points.

Austin Prock, son of championship tuner Jimmy Prock who crew chiefs Robert Hight’s car and grandson to drag racer Tom Prock, secured the first NHRA Mello Yello Drag Racing victory of his career taking out a slew of veteran racers while he was at it.

“It’s unbelievable. Just have to thank the Lord up above and John Force for giving me this opportunity. I told those Capco boys in Pomona (season opener in February) I was coming for them,” Prock said. “This is a dream come true. I’ve wanted this since I was knee high, ever since I could think I wanted to drive a Top Fuel car. To get the win, my dad is one of the best crew chiefs out there and to share a Wally with him working on the same team is pretty incredible.”

Prock started race day qualified in the No. 12 position with a match-up against Leah Pritchett, a foe he faced in the first round of eliminations at the Sonoma Nationals. The Montana Brand / Rocky Mountain Twist dragster sailed to a 3.761-second pass at 3256.95 mph narrowly defeating Pritchett’s 3.762 at 325.30.

Prock kept the consistency in the quarterfinals with a 3.829-second pass at 323.74 mph that was more than enough for a victory over Clay Millican who ran into trouble only putting up a 4.498-second pass at 163.20.

In the semifinals, Prock lined up with Mike Salinas who has already picked up two victories this season. It was a holeshot victory for the rookie who nailed the light at .047-seconds to Salinas’ .094. Prock would cross the line at 3.800 and 322.19 while Salinas recorded a 3.777 at 324.12.

“I’ve been looking for a holeshot win since I started this deal. That was really bad-ass to do it. It’s just cool that it came on the day that we made it to the finals,” Prock said. “Any time you can help your team out and get round wins, that’s how you win championships, that’s how you win races is when the car is down you have to step up and when the car is good you have to be there too. It’s a team effort out here. It’s not one or the other. Everyone’s got to do their job.”

In the final, Prock, in his first final round of his career, would race Steve Torrence, the current points leader, reigning world champion and winner of eight events in 2019. Torrence would take the starting line advantage, a rarity against Prock, but went up in smoke early and couldn’t pedal his way from behind. Prock would have a straight clean pass at 3.875-seconds and 307.86 mph for his first career victory.

“I wanted to race Steve in the finals. I said when we get to our first final round, I want it to be against Steve Torrence because I want to be the guy that stops him. It’s pretty bad ass that the rookie stopped the champ,” Prock said. “Steve did school me up there. Dude went and pre-staged so I went in and then he comes in and double bulbs me and obviously he knew I was nervous from the get-go. He was maybe trying to play some games because I was .030 and .040 in the rounds before. I went in there and never let my foot off the clutch pedal on my final stage procedure and I ended up swapping feet and that’s why I was so dang late. But when it’s your day, it’s your day.”

Starting race day from the No. 4 spot, Robert Hight and the Auto Club Chevy Camaro SS team blasted to a 3.929-second pass at 330.55 mph tallying the fastest speed of the event and defeated first round opponent Blake Alexander who ran 3.949 at 322.19. The win set up an all John Fore Racing Chevy Camaro quarterfinal matchup with team owner John Force. Hight hadn’t lost a round of racing to his mentor ending the racing legend’s race day four times in 2019.

The streak would end with Hight running 4.160-seconds at 230.84 mph after hazing the tires at the eighth mile mark being bettered by Force’s 3.973 at 323.04. Despite the rare second round exit, Hight will head into the NHRA Nationals in Brainerd with a 186 points lead.

“We were hoping for a better race. A second-round loss is not what we’re used to, but if you have to lose to somebody losing to the boss is not a bad thing,” said Hight who leaves Pacific Raceways with a hold on the points lead. “We have to do a better job of qualifying so we’re racing in the final or the semis and not second round.”

“Seattle has been a good weekend for all of John Force Racing. The Carquest Brakes team is still fourth in points but we qualified No. 2 and made some good, consistent runs all weekend. We had a second-round exit but overall it was a good day,” said Force. “We have a week off to rest and collect everything and get our heads back in the game before we go into Brainerd.”