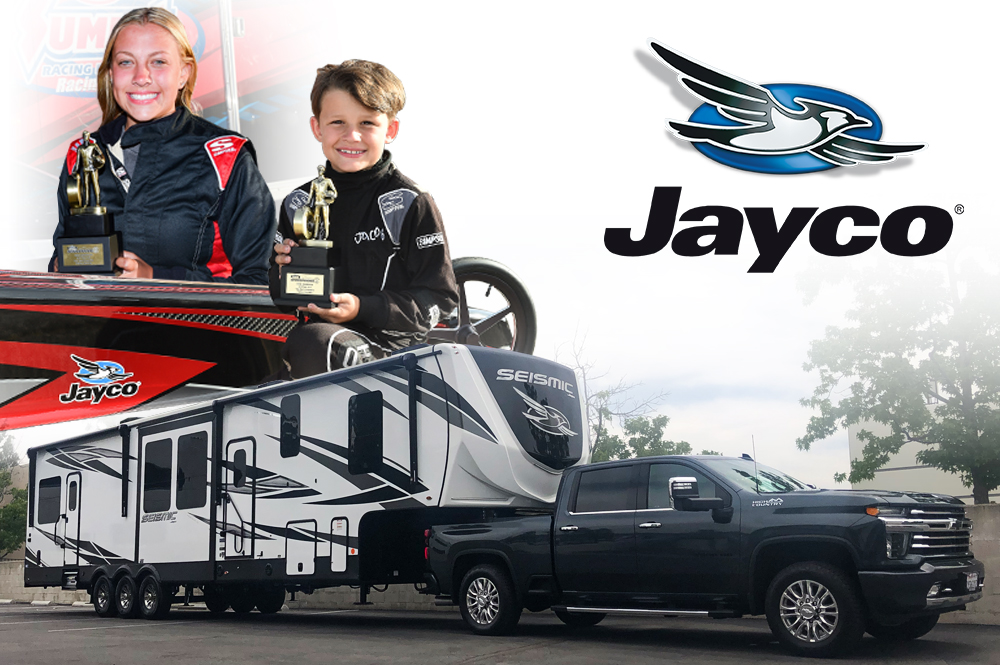 YORBA LINDA, Calif. (July 2, 2020) — It was announced today that Jayco, Inc., a leader in recreation vehicle manufacturing with a focus on family fun, is the official RV partner of John Force Racing’s Jr. Dragster teams headlined by sixteen-time Funny Car world champion John Force’s three grandchildren. “Knowing that my grandkids want to go drag racing is one of the highlights of my career. I want to keep this going and Jayco is helping me do it,” said John Force Racing owner and driver of the PEAK / BlueDEF Chevrolet Camaro SS Funny Car John Force.

“Travelling, on the road, I want my grandkids and their parents to be comfortable and be able to make memories. I want them to be able to get up in the morning and be ready to go, be able to come back and relax. Jayco is all about being family friendly. John Force Racing is a family company, we go racing as a family and now Jayco is part of that family.”

“Jayco is extremely excited to be partnering with such a well-known and established racing team. Jayco’s values and what we provide – generations of family fun – align perfectly with the John Force Racing team’s message and we couldn’t think of a better pairing,” said Brad Whitehead, Jayco Towables General Manager.

With over 50 years in the RV industry, Jayco has refined its RV manufacturing process, providing unmatched engineering with a solid focus on family friendly floorplans and understanding of the importance of sustainable practices. With a network of over 300 dealers and an industry-leading two year limited warranty and a three year limited structural warranty, the consumer can count on Jayco RVs to go the distance so that they can maximize every moment, no matter where the journey takes them.

Autumn Hight, daughter of three-time world champion and driver of the Auto Club of Southern California Chevy Robert Hight and John Force’s eldest daughter Adria, has two Jr. Dragster wins under her belt. The most recent came on June 13th in Fallon, Nevada. Jacob and Noah Hood are the sons of the first female Funny Car winner Ashley Force-Hood and crew chief of John Force’s BlueDEF / PEAK Chevy Camaro Daniel Hood. Jacob, the eldest of the pair, picked up his first Jr. Dragster win on June 14th in Fallon, Nevada. Noah is the most recent child to get his Jr. Dragster license and has been racing for under a year.