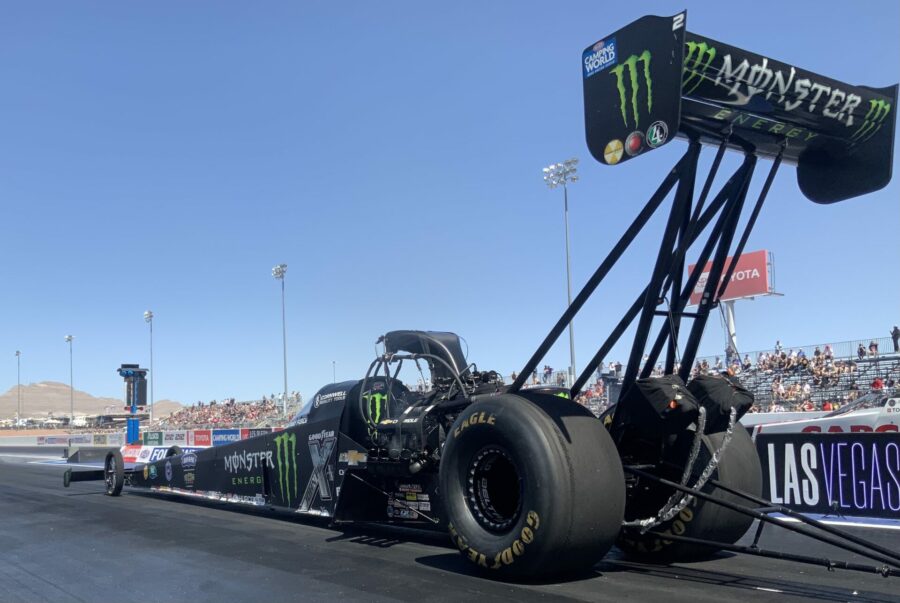 LAS VEGAS (April 02, 2022) – Brittany Force and the Monster Energy team gained momentum and consistency Saturday at the NHRA Four-Wide Nationals at The Strip at Las Vegas Motor Speedway to earn the No. 2 spot. John Force and the PEAK / BlueDEF PLATINUM Chevrolet Camaro SS team followed suit also qualifying No. 2. Robert Hight and the Automobile Club of Southern California team secured the No. 6 spot while Austin Prock and the Montana Brand / Rocky Mountain Twist team are sitting No. 12.

Brittany Force and the Monster Energy dragster came out making a point on the final day of qualifying. The David Grubnic and Mac Savage tuned team would take over the No. 1 spot at the Four-Wide Nationals during the third qualifying session when they blasted to a 3.735-seocnd run at 324.20 mph. In their final attempt, Force laid down an impressive 3.790 at 327.11 but would be bumped to the No. 2 spot.

“After four qualifying sessions this Monster Energy / Fav-R-Pac team took the number two spot. It’s a good position to be in,” said Force who lines up with Steve Torrence, Josh Hart and Cameron Ferre in the first quad. “We had three out of four solid passes down the track. Our best was a .73 and we’re looking forward to tomorrow. We’re looking for some clean runs and win lights all day long.”

John Force and the BlueDEF Chevy had a quality third qualifying session Saturday. They went 3.934-seconds at 325.45 mph to earn two bonus qualifying points for being second quickest of the session. In their final qualifying pass down The Strip, Force would go 3.986 at 315.64 with no issues. They’ll stay No. 2 with their 3.887 pass from the first qualifying session on Friday.

“It was a good day. It’s been a good weekend for the PEAK / BlueDEF team. I’m back in it. Love being in that race car. I have a friend from my high school days out here with me and it’s bringing back a lot of really good memories,” said Force who will compete against Jim Campbell, Cruz Pedregon and Alexis DeJoria. “Looking forward to tomorrow, getting some win lights, staying consistent. Danny Hood and Tim Fabrisi this team, they’ve worked hard on this car this weekend to get it running right. So now I gotta do my job and we’ll be okay.”

Already a two-time winner in 2021, Robert Hight and the Auto Club team were consistent on Friday but stumbled their first attempt at making it down The Strip at Las Vegas Motor Speedway. Hight’s Chevy would run into tire smoke and coast to a 5.743-second pass at 120.69 mph. The three-time championship team picked things back up in the final session powering to their best run of the weekend at 3.923-seconds and 325.14 mph to ultimately earn the No. 6 qualifying spot.

“A little bit of a misstep today but that’s all it was, a misstep. This Auto Club team picked it up in that second run and we’ll keep it going into race day,” said Hight who will run against Blake Alexander, Bob Bode and Tony Juardo to open eliminations on Sunday. “When you have Jimmy Prock and Chris Cunningham, you know they’ll do whatever they can to get this Auto Club Chevy running the way it needs to. After the start we’ve had, I’m not worried. Tomorrow will be good. It’s a short race day with only three runs but it’s a chance to gain some points.”

The Montana Brand / RMT dragster team improved during Saturday qualifying. On their first run of the day, Prock handled his dragster to a 3.918-second pass at 313.15 mph to shift into No. 11. Another clean pass straight down the groove for the Montana Brand team gives them a 3.942-second pass at 314.39 in the final qualifying session. Prock shifts into the No. 12 spot heading into race day.

“We made a lot of progress today. We’re not exactly where we want to be, but we’re heading in the right direction. Nothing really matters until tomorrow,” said Prock who will face Justin Ashley, Clay Millican and Jim Maroney in the first quad of eliminations. “This Montana Brand / Rocky Mountain Twist team is in the show, and you can kind of get away with making some mistakes tomorrow, but we don’t plan on doing that. We’re making some huge changes to the race car tonight and, we should be fine for tomorrow morning.”

Eliminations at the NHRA Four-Wide Nationals at The Strip at Las Vegas Motor Speedway are slated to begin at noon (PT) on Sunday. Racing action will be televised on FOX Sports 1 (FS1) Sunday beginning with qualifying at 12:30 p.m. ET and eliminations at 7 p.m. ET.