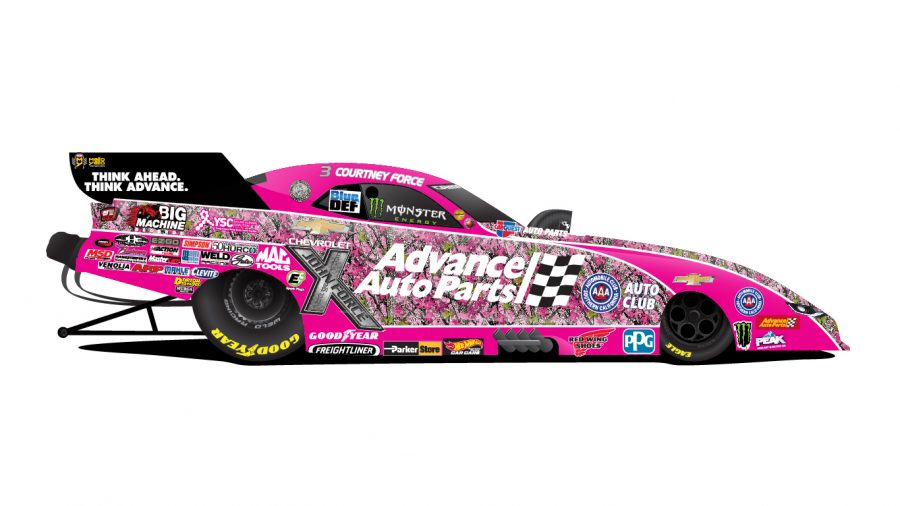 ENNIS, Texas (Oct. 3, 2018) — Courtney Force heads into the halfway point of the NHRA Countdown to the Championship third in the Funny Car points standings, just 70 out of first place. After leading the points for 12 races Force and her Advance Auto Parts team are more than confident heading to the AAA Texas NHRA FallNationals at the Texas Motorplex just outside of Dallas.

Force has had some success at Texas Motorplex. She’s been the No. 1 qualifier twice including in 2014 when she picked up her only win at the event, the other was in her rookie season, 2012. En route to her 2014 win, Force defeated former champion turned NHRA on FOX analyst Tony Pedregon, teammate and two-time champion Robert Hight, veteran racer Tommy Johnson Jr. and former champion Del Worsham.

This season, Force and her Advance Auto Part team have secured the No. 1 qualifying position 11 times, the third most in the Funny Car category and the most by any professional since 2009. She has six final rounds and four victories to go along with her top spots.

“It’s the third race of the countdown to the championship. We are looking to definitely go some rounds and get ourselves back in that top spot this weekend when we head back to Texas Motorplex,” said Force. “I’m really excited because not only are we in the middle of the Countdown and chasing a championship, but we are debuting our TrueTimber Sassy B pink Advance Auto Parts Chevy Camaro for Breast Cancer Awareness month and supporting the Young Survivors Coalition.”

Force and her Advance Auto Parts team are going pink for October in observance of Breast Cancer Awareness month sporting a pink Advance Auto Parts hot rod at the AAA Texas NHRA FallNationals and the NHRA Carolina Nationals. Her Funny Car will once again bring awareness to the Young Survivors Coalition (YSC), a premiere organization who for 20 years have been dedicated to the critical issues unique to young women under the age of 40 who are diagnosed with breast cancer. Advance Auto Parts will be donating one dollar to YSC for every battery tested and installed at Advance Auto Parts stores.

“I really loved being involved with designing the look of the car this year and working with Brittany to have matching cars,” Force said. “I’m really honored to be able to have this opportunity to drive a race car that helps support an organization such as YSC. I hope we can get this TrueTimber pink camo schemed Advance Auto Parts Camaro in the winner’s circle and try to get back to dominating that points lead for all the survivors and all those currently battling breast cancer.”