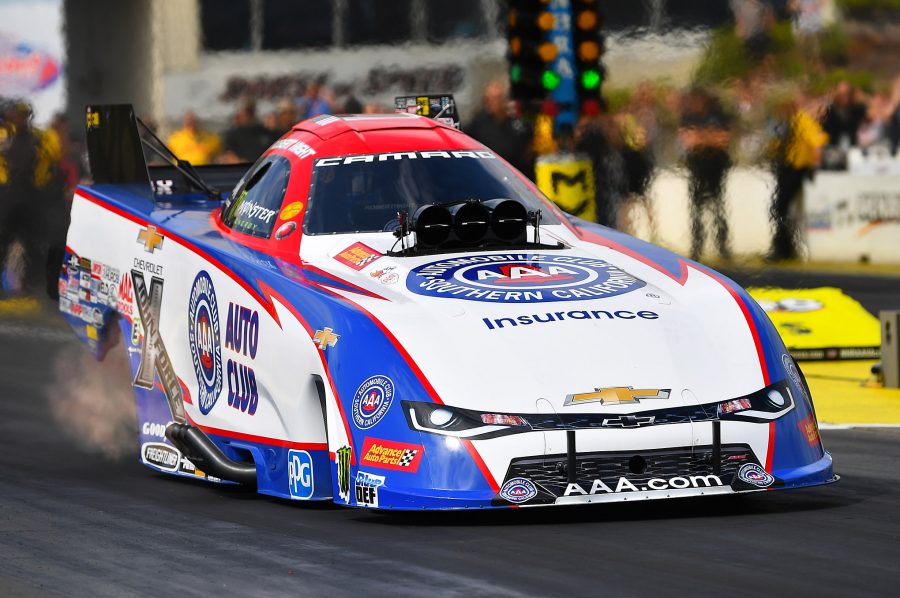 TOPEKA, Kan. (May 20, 2018) — Eliminations at the Menards NHRA Heartland Nationals did not go on as scheduled. An extensive rain delay pushed the once slated 11 a.m. start to 7 p.m. and because of the late hour and weather conditions the nitro categories were only able to race through the quarterfinals. Semifinals and finals will be run on Monday morning beginning at 10 a.m. at Heartland Motorsports Park.

Courtney Force and Robert Hight will both be competing in the “Monday Nationals” after pedaling their ways out of the first round and then laying down impressive side-by-side runs in the quarterfinals. Brittany Force ran quickest of the weekend in the Top Fuel category but struggled to a quarterfinal exit and John Force, like Courtney and Hight, had to pedal it in round one but fell to Tommy Johnson Jr.

Courtney Force was able to pedal her Advance Auto Parts Chevrolet Camaro SS around Richard Townsend in the first round before powering her Funny Car to a 3.934-second pass at 328.54 mph narrowly defeating Matt Hagan and his 3.936 pass at 328.94. Force will line up against J.R. Todd in the semifinals.

“It was a completely different day of racing when you compare the conditions from qualifying. We had to wait around eight hours and then had to pedal it in the first round. I actually had to pedal it a couple times but we were able to get that win light but we lost lane choice for the second round against (Matt) Hagan but man, my team laid down a solid number,” Force explained. “We gave it all we had and put it all out there with this Advance Auto Parts Camaro. It was a close race with Hagan and he is a great driver. I think we really gave the fans out there a really good show on that run. We really appreciate all the fans that stayed out here all day to support us. We are looking forward to racing in the semifinals tomorrow.”

Hight, who struggled throughout qualifying landing in the No. 14 spot, pedaled his way out of the first round defeating Cruz Pedregon. In round two, Hight drove his Auto Club of Southern California Chevrolet Camaro Funny Car to a stellar 3.924 pass at 330.23, the top speed of the event so far. Hight will race Shawn Langdon in the semifinals on Monday.

Reigning Top Fuel world champion Brittany Force opened eliminations as the first pair down the newly dried race track. She piloted her Monster Energy dragster to what was the quickest time of the event, a 3.723 pass at 328.06 mph, before being over taken by Steve Torrence with his 3.684 pass in the second round.

“I am proud of this team especially after this weekend. All the ups and downs and an eight-hour delay before first round. It is not easy to go up there,” Force siad. We made our best run of the weekend in first round. We really stepped up our game and thanks for Alan Johnson and Brian Husen. These Monster Energy guys were awesome and unfortunately in that second round the other guy got around us. Our day ended a lot earlier than we wanted. We will head home and be ready in two weeks for Chicago.”

The long weather delay affected every team and as the third John Force Racing Funny Car to hit the track in the first round No. 11 qualifier and sixteen-time Funny Car world champion John Force was in a tough spot. Both of his teammates had advanced after winning pedal-fests so track conditions were a major concern for all the teams. At the hit of the throttle Force’s PEAK Chevrolet Camaro Funny Car overpowered the track. The winningest driver in NHRA history had to watch as his opponent pulled away while he tried to get his Funny Car to reel him in.

“You never know what is going to happen when you have to wait all day on rain delays and the temperatures drop so dramatically,” said Force.