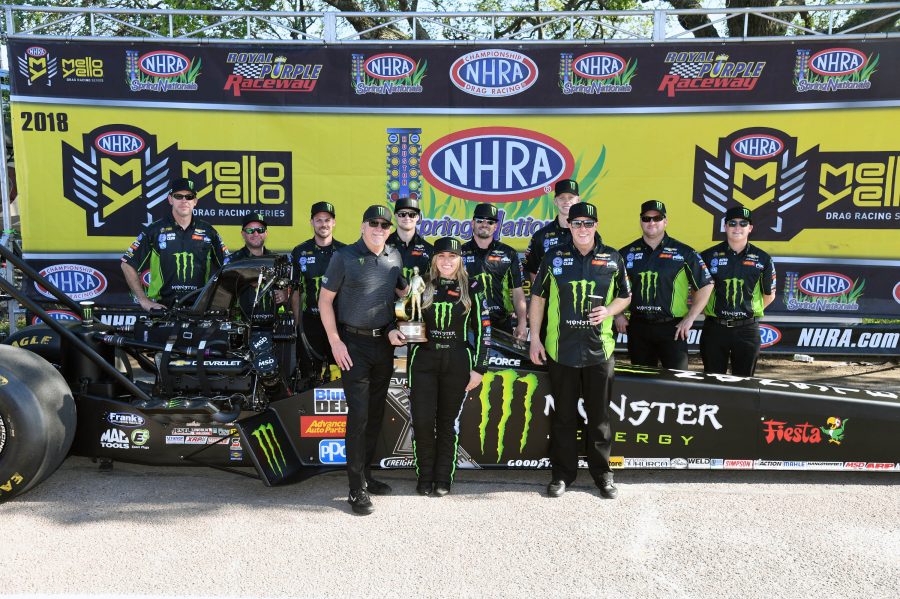 BAYTOWN, Texas (April 22, 2018) — Just four races after being involved in a serious crash, Top Fuel world champion Brittany Force piloted her Monster Energy dragster to the winner’s circle at the NHRA SpringNationals on Sunday. Robert Hight powered to the Funny Car finals and Courtney Force had a first round finish at Royal Purple Raceway just outside of Houston.

Brittany Force picked up her eighth career win, first of the season and first at Royal Purple Raceway when she raced to a 3.762-second pass at 299.46 mph to defeat Terry McMillen’s 3.818 at 311.56. The result comes after months of recovery for Force. As a result of her devastating crash at the season opening NHRA Winternationals, Force had an overnight hospital stay and has continued to go to physical therapy.

“This is a big win for us because our season has been so up and down. Our wreck in Pomona was a tough start,” Force said. “Leaving Pomona last season we were on a huge high. We won the championship and that is something every driver dreams about. We were able to do that and then coming out to the opening race of the season at the same track in Pomona it was the ultimate low. It was really tough in Phoenix getting back in that car. My guys knew it and for me I didn’t care about winning the race. All I cared about was getting back in the car and making runs. Gainesville was when I really felt like it was game on. This win is big for us. It puts Pomona behind us and it pushes us towards another championship. It’s because of the support system I have around me – sponsors and my team – that got us here today. I feel great now. I am back in the gym but not a 100% back.”

Following the accident that destroyed Force’s brand new car, the Monster Energy team pulled out 2017’s championship car and this weekend they debuted another new car.

“Unfortunately, at the first race we damaged a car that was just like this one, so we had to put the old one back together with some parts that got damaged in the wreck,” explained Top Fuel consultant Alan Johnson. “It took a couple races to kind of get that dialed in and put this new car together and it all kind of came together. It’s extremely important to get that win, to get that monkey off her back. She has confidence now, the crew has confidence. We’re looking to do pretty good in the next few races.”

Brittany Force competed against Terry Haddock, Doug Kalitta, and Tony Schumacher before winning against McMillen in the final. The second round match-ups against veteran drivers like Kalitta and Schumacher, the winningest Top Fuel driver in NHRA, bolstered her confidence heading into the final round. She jumps to seventh in the NHRA Mello Yello Points standings.

After dominating the top of the qualifying ladder, reigning Funny Car world champion Robert Hight had his second consecutive runner-up finish at the NHRA SpringNationals when he crossed the finish line with a 3.993 at 313.29 in his AAA Texas Chevrolet Camaro SS. He was out run by J.R. Todd’s 3.955 at 313.29.

“That was a close race. We were the quickest Funny Car every session today until the final. This AAA Texas team was great all weekend on a tough race track,” said Hight, the event’s No. 1 qualifier. “I am excited about the momentum we have now. Like I said coming into this race Jimmy and I talked about starting our season with this race and this wasn’t the outcome we wanted but we got very close. Every round today we were focused and working together. We had a lot of teamwork before the final with guys from the Advance Auto Parts team and the PEAK team working with my guys. I am proud of the effort. This track was cool in the morning and hot in the afternoon and we got down to the finish line every time. That is quite an accomplishment under tough circumstances especially with a quick turnaround before the final.”

Hight had the quickest Funny Car all day posting low ET during the first three rounds. He opened race day with a blistering 3.878-second run at 322. 42 mph. His elapsed time and the speed stood up as category leaders for the event. It was even more impressive considering Hight was on a solo run after Todd Simpson was pushed back from the starting line. In the second round Hight posted the quickest run of the round against Jonnie Lindberg running 3.95 at 310.84. In the semifinals, racing veteran Jack Beckman, Hight again was low E.T. of the category lighting up the scoreboard with a strong 3.959 second run which was the only sub four-second run of that round. The three round wins moved Hight up to fifth in the Mello Yello points standings.

Courtney Force, who was qualified second, had to pedal her Advance Auto Parts Chevrolet Camaro to a 5.944 pass at 131.25 for a first round exit against Jeff Diehl. Force was on another stout run before she was forced to lift and had a .089 reaction time. The team evaluated her time slip after the run and her Funny Car was on a similar pass to Hight before it overpowered the track.

“It is hard to be too down on how we did here even though we went out in the first round. We were the No. 2 qualifier and I have to give it to my team. They laid it all out there in the first round. The conditions were so good. We watched Robert right in front of us run a killer number. We knew what the track was capable of holding,” Force explained. “We were on a run as quick as Robert unfortunately our car didn’t pull through. It shook hard and I had to get off the throttle and pedal it. Diehl was down track about to turn on the win light and I couldn’t catch him. We gave it our best and we will be back in Charlotte going for another win this season. The Texas fans have been awesome.”

Force had previously defeated Diehl in the first round of the SpringNationals in 2017. Force is fourth in the NHRA Mello Yello points standings with a win and two No. 1 qualifiers this season.

For the first time in 221 races, 16-time champion John Force did not make the 16-car field at the NHRA SpringNationals. Force was a spectator for the rest of his team and stood with the crew in support of his drivers.

“It wasn’t my weekend, but it was a good weekend for John Force Racing and all our sponsors: AAA Texas, Chevrolet, Advance Auto, Peak and Monster. Brittany coming back from that big crash to get a win that showed the heart of a champion. And Robert taking the AAA Texas Chevrolet to the another final. The brain trust will figure out my car. We’ve dug ourselves a pretty good hole but it’s a long season. I’m not ready to be a spectator. I love this sport. I love the competition. I’ll be back.”

All of John Force Racing will be back for more NHRA Mello Drag Racing Series action at next week’s NHRA Four-Wide Nationals at zMAX Dragway in Charlotte on April 27-29.