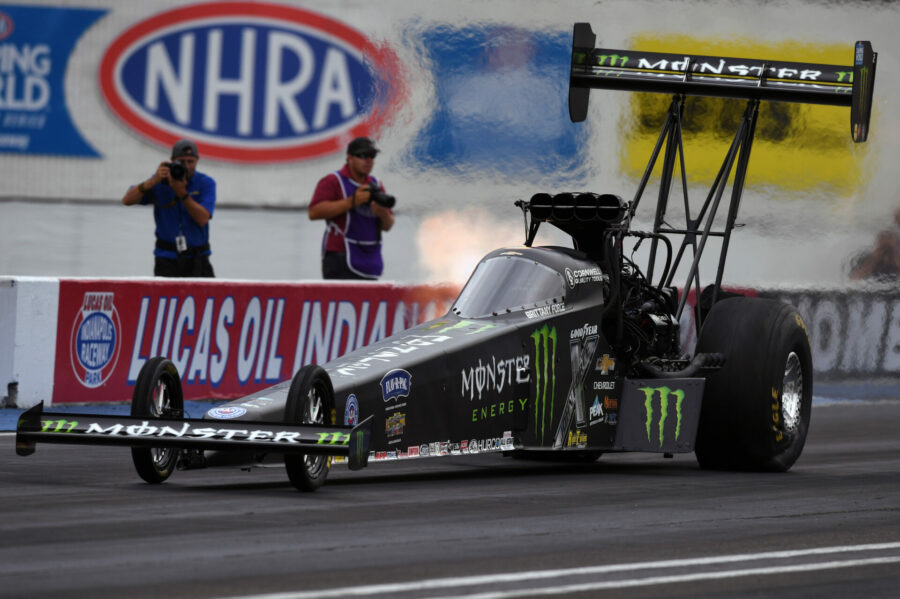 INDIANAPOLIS (Sept. 04, 2022) – Brittany Force and the Monster Energy / Flav-R-Pac Chevrolet dragster took the No. 1 qualifying position at the Dodge Power Brokers NHRA U.S. Nationals in dramatic fashion Sunday at Lucas Oil Indianapolis Raceway Park. Robert Hight and the Automobile Club of Southern California Chevy Camaro SS will start race day from No. 2 while John Force and the PEAK Antifreeze and Coolant Chevy will start from No. 4 and Austin Prock put the Montana Brand / Rocky Mountain Twist dragster into the No. 14 spot.

In a bit of a redemption run after struggling through the first two qualifying sessions and coming up short in the Pep Boys Callout final round, Brittany Force and the Monster Energy team set both ends of the track record with a stellar 3.640-second pass at 337.75 mph to take over the No. 1 spot. Their efforts would tie them for the fourth fastest in NHRA Top Fuel history. Force now owns nine of the top 10 and has run 337.75 mph four times.

This is Force and the Monster Energy / Flav-R-Pac team’s seventh No.1. of the season, Force’s 29th of her career and her third at Indianapolis Raceway Park. With rain cancelling the completion of the fifth qualifying session, Force will be matched with Dan Mercier in the first round.

“Definitely a big one for this Monster Energy team, everyone top to bottom, David Grubnic and Mac Savage and all the Monster Energy boys. This is the biggest race of the season, it’s the one race everyone wants to win. There’s extra motivation coming into it. It’s Indy and everyone wants to accomplish something here,” Force said. “That was a killer run. Especially since we struggled every lap and then we finally got it figured out. It was outstanding. Then for it to be part of the quickest field in NHRA history and to be part of that with 25 cars is pretty incredible. That’s history and we want to leave our mark so to come here to Indy and take that No. 1, we’re just excited. It’s already been a long weekend so tomorrow we’re taking it one run at a time. Everybody has to be dialed in and we’re planning to deliver.”

Robert Hight and the Auto Club Chevy duplicated their Friday evening run going 3.870-seconds at 332.26 mph, a solid run that earned them the first-round win in the Pep Boys NHRA Funny Car All-Star Callout and three bonus points for being the second quickest of the session. Their opponent, Bob Tasca III would smoke the tires at the jump for a 12.865 at 60.32. In the second round of the Callout, Hight would hit tire smoke early and coast to a 10.119 at 82.57 while Matt Hagan ran 4.180 at 255.73 for the win.

Entering the final qualifying session in the No. 2 spot, Hight handled the Auto Club Chevy to another stout 3.866-second pass at 327.27 mph. He’ll start race day from the No. 3 spot and faceoff with John Smith in the first round.

“We have to focus on what we can control. It doesn’t matter who is in the other lane, how quick or how fast they are, we can only control what we do. This Auto Club team has been consistent, with the exception of the Callout second round, we’ve had quality passes all through qualifying. That’s promising,” Hight said. “In order to win races you have to be able to be consistent, have a good combination and be confident in your team. We have all of those things with this Auto Club Chevy team. We just need to keep getting the job done.”

In their first round of the Pep Boys Callout and their third qualifying try, John Force and the PEAK Auto Chevy stayed consistent running 3.931-seconds at 327.82 mph to pick up the win over Cruz Pedregon’s 4.031 at 311.49. In the semifinals, Force would have the starting line advantage against Ron Capps, who chose him as an opponent after being quickest of the first round. Force would start the lose traction at mid track and have to shut off to go only 5.162 at 147.65 mph to Capps’ 3.896 at 332.59.

In the final qualifying session, Force and his Danny Hood and Tim Fabrisi tuned PEAK Camaro would have another quality run at 3.921-seconds at 329.02 mph. He’ll be No. 4 to start race day and compete against Paul Lee in the first round.

“Well, couldn’t get the job done in Callout, but we qualified well, consistent with our runs,” Force said. “We look good for race day and that’s what we’re here for. To get the job done on race day. Biggest race of the year and we want to get this PEAK Chevy in the winner’s circle for all our sponsors and for some momentum going into the Countdown.”

Austin Prock and the Montana Brand / Rocky Mountain Twist team opened the final day of qualifying with a 4.650-second run at 163.08 mph after losing traction at mid-track. Due to the rain, Prock wouldn’t have an opportunity to improve upon his qualifying position. The Montana Brand team will start race day from the No. 14 spot racing against Steve Torrence first round.

“Tough end to qualifying with the rain out. This Montana Brand / Rocky Mountain Twist team was in need of that last qualifying run,” Prock said. “We are set up with a huge first round match up with the reigning champ. These big match ups early in the day are what I live for. Winning the U.S. Nationals never comes easy so might as well start the day out with taking out a hitter. We need a good weekend so we will see how our cards fall.”

Competition at the prestigious U.S. Nationals continues with eliminations Monday at 10 a.m. Television coverage of qualifying and the Pep Boys NHRA Funny Car All-Star Callout will be on FOX Sports 1 (FS1) with shows Sunday at 1, 4 and 5:30 p.m. ET. Eliminations coverage will be split with a show at noon ET on FS1 and then 2 p.m. ET on FOX Broadcasting Network.