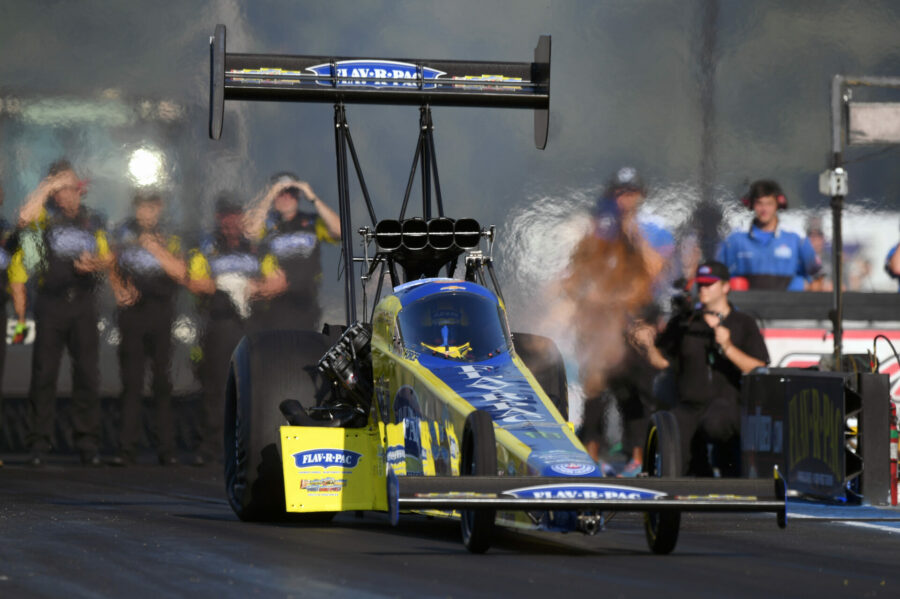 Brittany Force and the Flav-R-Pac dragster had a hard time getting off the line in their second qualifying try. Force is shut off almost immediately and coasts to a 12.566-second pass at 62.56 mph. The Top Fuel points leaders eliminated doubts of a wavering tune up in their final session laying down a stellar 3.753-second pass at 327.35 mph to jump from No. 13 to the No. 1 spot. It is her fifth No. 1 this season, first at Pacific Raceways and 37th of Force’s career. She’ll race against Jim Maroney in the first round of eliminations.

“That was really important to be able to make a killer run and get this Flav-R-Pac dragster down the race track. We struggled Q1 and 2. In Q1 we got greedy and then in Q2 our automatic shut off malfunctioned. We went back, fixed the problem and had answers for both runs. Luckily on our third run we really laid it down. Very similar to last weekend in Sonoma, one run down in qualifying and then came out race day and got the job done,” Force said. “I wasn’t expecting that in the heat third run but Grubby said he wanted to push and get into the top. It was pretty outstanding for this Flav-R-Pac team.We ended up going No.1 at this Flav-R-Pac sponsored race so we think the boss is happy.”

“In the top of the qualifying ladder, good place to be for this PEAK Chevy,” Force said. “Brittany is over there in the Flav-R-Pac dragster landing it in the No. 1 spot at her sponsor’s race. Putting on a show for Frank Tiegs and all the Flav-R-Pac employees and customers we have here with us. Going to be a good day tomorrow trying to get this PEAK Funny Car in the winner’s circle.”

Robert Hight and the Auto Club Chevy team picked up their performance Saturday at the Flav-R-Pac NHRA Northwest Nationals at Pacific Raceways to jump into the No. 5 spot. On their first run on Saturday, the Auto Club Chevy had a clean solid 4.003-second pass at 231.24 mph that would earn them three bonus points for being quickest of the session and ultimately land their No. 5 qualifying spot. In the final qualifying session of the Northwest Nationals, Hight would handle the Auto Club Camaro to a 4.035 at 297.94.

“My crew chiefs, Jimmy Prock and Chris Cunningham, they wanted to run 3.99 on that first run today and that just shows the kind of power we have in this combination. They’ve all worked really hard, all these Auto Club guys to get us where we are now,” said Hight who will run against Ron Capps first round. “Looking forward to tomorrow, going to take it one run at a time and get this Auto Club Chevy back in the winner’s circle.”

Austin Prock and the Montana Brand / RMT dragster don’t have a full pull but make a huge improvement in the second qualifying session going 4.034-seconds at 231.24 before clicking it off. Crew chiefs Joe Barlam and Rahn Tobler tuned the Montana Brand / RMT dragster to a a solid 3.870 at 312.21 to put Prock in the No. 10 spot to compete against Justin Ashley in the first round.

“It was another day of learning for this Montana Brand / Rocky Mountain Twist team. We’ve improved each session here at the Flav-R-Pac Northwest Nationals,” Prock said. “I feel confident that we will have a competitive car come race day tomorrow. Looking forward to going some rounds and finish this Western Swing out strong.”