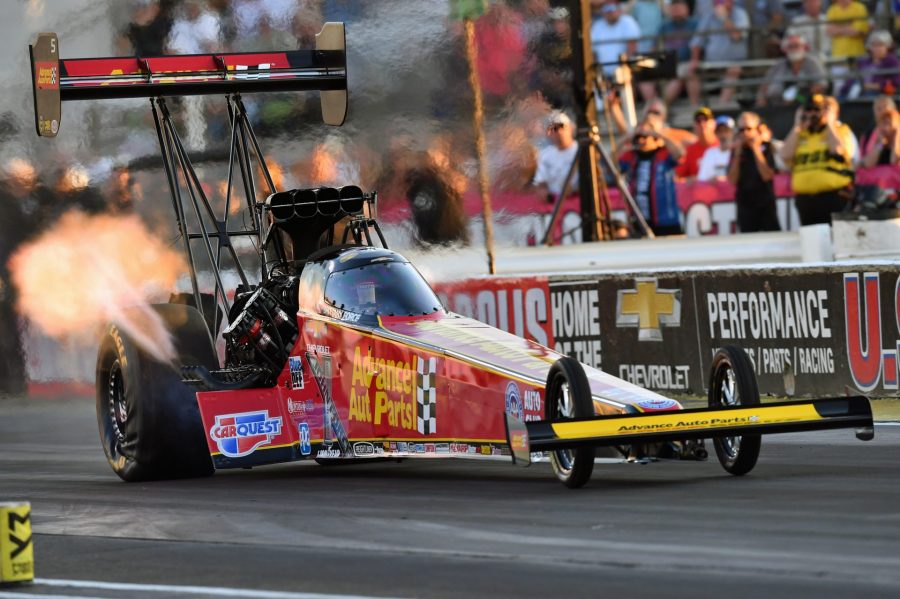 BROWNSBURG, Ind. (Sept. 1, 2019) — Brittany Force, driver of the Advance Auto Parts dragster, became the first female Top Fuel driver in NHRA history to occupy the No. 1 qualifying position heading into race day at the NHRA Chevrolet Performance U.S. Nationals at Lucas Oil Raceway at Indianapolis. Her legendary father, John Force kept the No. 3 spot with his PEAK Chevrolet Performance Accessories team, and teammates Robert Hight with Auto Club and rookie Austin Prock with Montana Brand / Rocky Mountain Twist both moved up the ladder to start from sixth and No. 12.

Having led the Top Fuel class through the first two days of qualifying, Brittany Force maintained her grasp of the top spot through Sunday’s final two sessions despite a dropped cylinder in the first run of the day and smoking the tires in the second. Force has landed the Advance Auto Parts dragster in the No. 1 spot for the sixth time this season and 16th time of her career. Her command over the category came after breaking the track elapsed time and speed record Saturday night when she piloted her hot rod to a blistering 3.645-second pass at 332.26 mph.

“That’s pretty awesome to be able to accomplish that, to be the first female No. 1 qualifier in Top Fuel, with the Advance Auto Parts team, David Grubnic and Mac Savage. It’s a big accomplishment, but we want to do more. We want to win this thing tomorrow. To win Indy, it’s joining a list of legends. My dad is on there and so many drivers that I’ve looked up to,” said Force who will

take on T.J. Zizzo in round one Sunday. “We ran a .64 this weekend and .67 and we’re qualified No. 1 in the show. We had the opportunity to push the car in that last run and really see what we could do. It didn’t get down there but we know our limits and I’m ready for tomorrow.” By qualifying for race day at the Chevrolet Performance U.S. Nationals, Robert Hight and the Automobile Club of Southern California Chevrolet Camaro team earned their first regular season championship. Hight, who has led the NHRA Mello Yello Funny Car points standings for 18 consecutive races since winning the season opening Winternationals, earned the fifth regular season championship for John Force Racing. Team namesake John Force held the No. 1 spot going into the Countdown in 2010 and 2014, former driver Mike Neff in 2011 and Courtney Force in 2018.

The Auto Club Camaro came into the final day of qualifying for the Chevrolet Performance U.S. Nationals in seventh off the efforts of their 3.896-second pass from Friday night. After struggling through Saturday’s qualifying sessions, Hight found consistency during Sunday’s two runs. They opened the day by running a 3.926-second pass at 329.10 mph. Crew chiefs Jimmy Prock and Chris Cunningham picked up the performance of their Auto Club Chevy during the final session with a 3.884-second pass a 300.07 mph that would land them in the sixth spot to run Tim Wilkerson in the first round of eliminations on Monday.

“First off, knowing we are going into the Countdown to the Championship sitting No. 1 feels pretty good. We get a little more of a cushion, not much, 20 points, but it’s more than the 10 that everyone else will be getting. Now it’s just time to go out and win the Chevrolet Performance U.S. Nationals. That’s an accomplishment in itself,” said Hight who, after the points reset heading into the six race Countdown to the Championship, will take a 20-point lead over the No. 2 spot. “We want to get a John Force Racing Chevy into the winner’s circle every weekend, but this weekend especially, and I want it to be the Auto Club Camaro. We were better today; I knew we would be. Jimmy and Chris, they were working on some things and got it figured out in that first run, the second run, they were able to push it a little so we’re ready for tomorrow.”

Racing legend John Force will start race day from the No. 3 qualifier spot after handling his PEAK Chevrolet Performance Accessories Chevy Camaro SS to a stellar 3.876-second pass at 332.67 mph during Saturday’s evening session. Force held onto his positioning through the final two qualifying rounds and kept up the performance by running a solid 3.920-second pass at 316.52 mph in the fourth session

and shut off early in the fifth session for a 3.961 pass at 278.12 mph. The 16-time Funny Car world champion heads into the first round paired against Jonnie Lindberg.

“This is Chevy’s race and we’re all in the show tomorrow. Brittany went No. 1 with Advance, Robert and Auto Club moved up and the Prock Kid is in it with Montana Brand and I’m in it, so I’m happy. This PEAK Chevrolet Accessories team gave me a great hot rod today and I’m excited get out there tomorrow and see if we can get this in the winner’s circle for Chevrolet, PEAK and all our sponsors,” said Force. “This is Indy. It’s the biggest race of the year and the Countdown is starting right after. We’re all hard at work to go rounds and do good for our sponsors and the fans.”

Austin Prock and the Montana Brand / Rocky Mountain Twist team started day three of qualifying with a 4.920-second pass at 316.52 mph after smoking the tires and shutting off early to stay in the No. 13 spot. In his last pass of the day, Prock powered his 11,000-horsepower machine to a clean 3.726-second pass at 326.71 mph. It was his best pass of the weekend and moved him up into 12th. The third-generation driver will be competing to become the first rookie to win the U.S. Nationals since Richie Crampton in 2014, who he will be facing in round one of eliminations.

“This Montana Brand / Rocky Mountain Twist team ended our first Chevrolet Performance U.S. Nationals with a bang. Went third quick in the last session and set ourselves up nice for Monday,” said Prock. “I’m proud of my guys keeping their heads down and putting up a nice number on the board. I’m ready to go win this deal.”

Eliminations for the Chevrolet Performance U.S. Nationals will start Monday at 11 a.m. with coverage on FS1 also starting at 11 a.m. ET and continuing at 1 p.m. ET on FOX Broadcast Network.