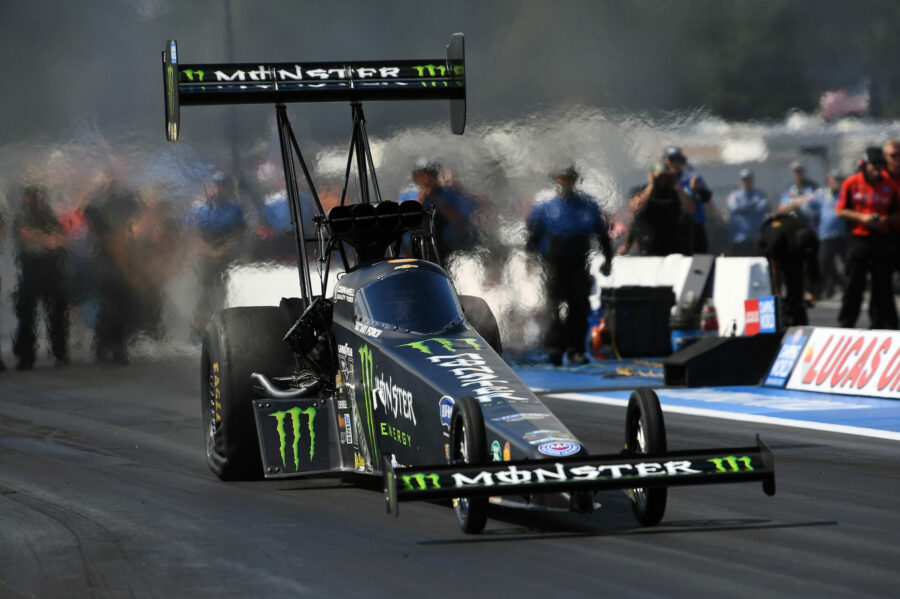 BRAINERD, Minn. (Aug. 20, 2022) – Brittany Force and the Monster Energy / Flav-R-Pac Chevrolet dragster tallied their sixth No. 1 of the season Saturday at the Lucas Oil NHRA Nationals at Brainerd International Raceway. Robert Hight and the Automobile Club of Southern California Chevy are sitting No. 2 narrowly missing the top spot. Austin Prock and the Montana Brand / Rocky Mountain Twist dragster have the No. 8 spot after a solid two days of qualifying and John Force and the PEAK Antifreeze and Coolant Chevy will start from No. 13.

Brittany Force and the Monster Energy team, already sitting No.1. coming into the day, bettered their Friday evening performance with a stealth 3.661-second pass at 334.65 mph, further solidifying their top spot, the 38th of her career and second at Brainerd International Raceway. With the cloud cover gone, Force would lay down another solid run in the final qualifying session going 3.718 at 330.88.

“This Monster Energy / Flav-R-Pac team has had some killer runs and been very consistent. That last run, we were trying to push a little bit more. Overall, though, we kept that No. 1 and put some solid passes on the race track,” said Force who has a first round bye. “We love being able to have four qualifying sessions, it gives us a chance to learn as much as possible about the track. We had three really good passes and collected some points and got ourselves to the top spot. I’m feeling good going into tomorrow with this new car, we like it so far and we get another test run tomorrow with a bye.”

Kicking off the day in the No. 1 spot, Robert Hight handled the Auto Club Chevy to a nearly identical run from Friday evening, a 3.865 at 330.96 mph. In the final session, after being bumped to No. 2 by Bob Tasca III, Hight would lay down a killer 3.861 at 331.94 but with Matt Hagan running a 3.841 right beside him, Hight would have to settle for a No. 2 qualifying position and only five (instead of six) bonus points.

“It’s been a great weekend so far for this Auto Club Chevy team. These guys have been doing a great job, four really good runs down the race track. That last session, it just goes to show you how competitive this Funny Car class is this year,” Hight said. “We know if we want to win another championship, we have to win at least two or three more races and I really think today is proof of that. We have to stay consistent and keep it going, starting tomorrow in the first round.”

Austin Prock and the Montana Brand / RMT team are walking away from qualifying with four quality runs. Prock would open the day with a 3.720-second pass at 331.69 mph to shift the Montana Brand / RMT team into their No. 8 qualifying spot. In their final try, Prock would have another clean 3.733 at 329.75. Prock faces Billy Torrence in the first round.

“That was a great end to qualifying for this Montana Brand / Rocky Mountain Twist team. We made four consecutive competitive runs with no parts damage,” said Prock who celebrated his 27th birthday on Sunday. “We have all four runs to look at for tomorrow and that’s the best position to be in. It’s been a great weekend so far and I would love to have a great points day tomorrow.”

John Force and the PEAK Chevy struggled through qualifying. They started their day in the No. 11 spot after not making a clean run on Friday. Force would have to hold on for a 6.570-second pass at 103.29 mph and a 5.911 at 117.26 after smoking the tires and having to shut off early both runs on Saturday. Force shifted into the No. 13 spot with his 4.121 run from Friday night and will race Ron Capps first round.

“Obviously not what we were looking for today, or yesterday,” Force said. “Tomorrow is a new day and we’ll keep moving forward. This PEAK team, Danny Hood, Tim Fabrisi and all my guys, they are working hard. They’ll get this Chevy ready for tomorrow and we’ll see how it goes. The rest of our teams, they’re looking good, so that’s good.”