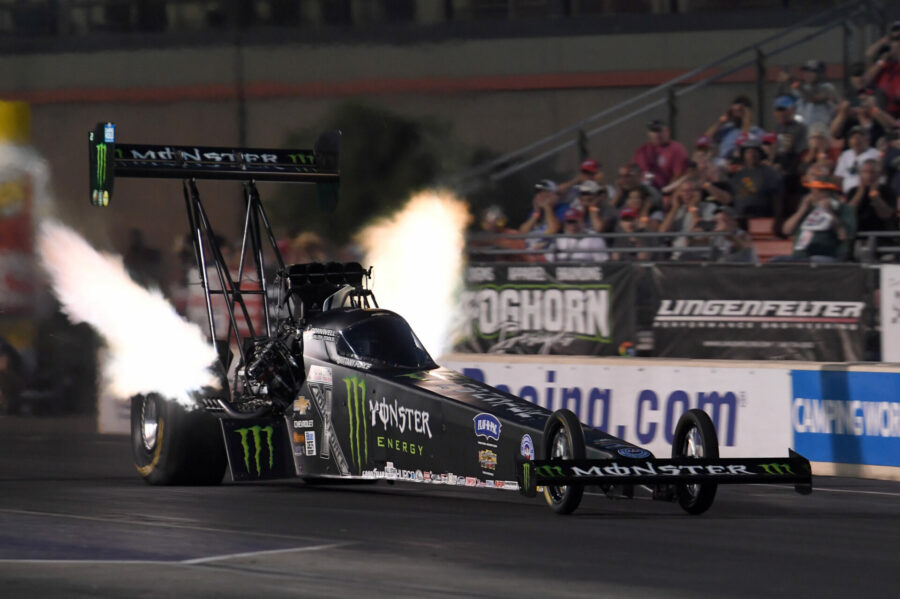 NORWALK, Ohio (June 24, 2022) – Brittany Force and the Monster Energy Chevrolet dragster team rocketed to the top of the Top Fuel qualifying ladder setting both ends of the Summit Racing Equipment Motorsports Park track record on Friday night of the Summit Racing Equipment NHRA Nationals. John Force and the PEAK / BlueDEF PLATINUM Chevrolet Camaro SS are No. 2 with Robert Hight and the AAA Ohio Camaro right behind in No. 3. Austin Prock landed the Montana Brand / Rocky Mountain Twist dragster in the No. 5 spot.

Brittany Force and the Monster Energy team closed out Friday night with a bang. The David Grubnic and Mac Savage led team laid down a stellar 3.666-second pass at 333.08 mph to set both the track speed and elapsed time records. Force broke he own record of 3.696 that she set in 2021. She holds the track ET record at 10 of the current NHRA Camping World Drag Racing tracks on tour and now holds the speed record at 12.

“Grubnic and I always chat right before going into the run. After our first run, we knew we could really push. We were at the back of the field so we could watch what everyone else was able to do so they did some fine tuning back in the staging lanes. I was expecting a 3.68 or 3.69 but not that 3.66. It was an incredible, beautiful run,” said Force, who started the day with a 3.798 pass at 326.16 mph that was quickest of the first session. “Tomorrow it’s going to be warmer, so we’ll be looking for two solid, clean runs to get us set up for race day.”

John Force and the PEAK / BlueDEF Chevy have no complaints after day one in Norwalk, Ohio. The 16-time champion handled his Camaro to the only sub four second pass of the first session going 3.947-seconds at 323.97 mph to earn three bonus points and, temporarily, the No. 1 spot. There would be improvement all around in the second session. Force would lay down a 3.903-second run at 330.15 mph, enough of a jump to put them in the No. 2 spot.

“I’m excited to be here in Norwalk, Ohio. The Baders, they know how to promote. It’s good to be back here,” Force said. “My PEAK hot rod is running pretty good. Two solid runs sitting No. 2. It’s good especially with the warmer weather coming tomorrow. We know we’re in and now we just to get set up for Sunday.”

Robert Hight and the AAA Ohio Chevy smoked the tires in their first go on Friday afternoon. The AAA Camaro would record a 6.770-second pass at 96.62 mph. Hight would make a drastic improvement in the second session with a 3.907 at 327.59 mph that put them in the No. 3 spot.

“We picked it up there in the second session, just too aggressive that first run. This AAA Chevy is in a solid spot. It’s supposed to be warmer tomorrow, so we needed that second run tonight,” Hight said. “We’ll get two solid passes tomorrow and then be ready for race day and just take it one run at a time and hopefully get this AAA Camaro in the winner’s circle.”

The Montana Brand / RMT dragster smoked the tires late in its first qualifying try. Austin Prock had to shut it off early to go 4.333-seconds at 190.03 mph. Montana Brand team improved in the night session with a clean 3.745 pass at 328.78 to shoot them up to the No. 5 spot.

“Our Montana Brand / Rocky Mountain Twist dragster just barely missed on a really nice run in the first qualifying session. It was close to being as quick as the best. We made a good rebound for the second session. Our 3.745 just missed the No. 3 spot by .001 of a second,” Prock said. “It was nice to have two runs today. These runs are a premium especially when you’re a new team. I want to thank Bill Bader for making it happen.”